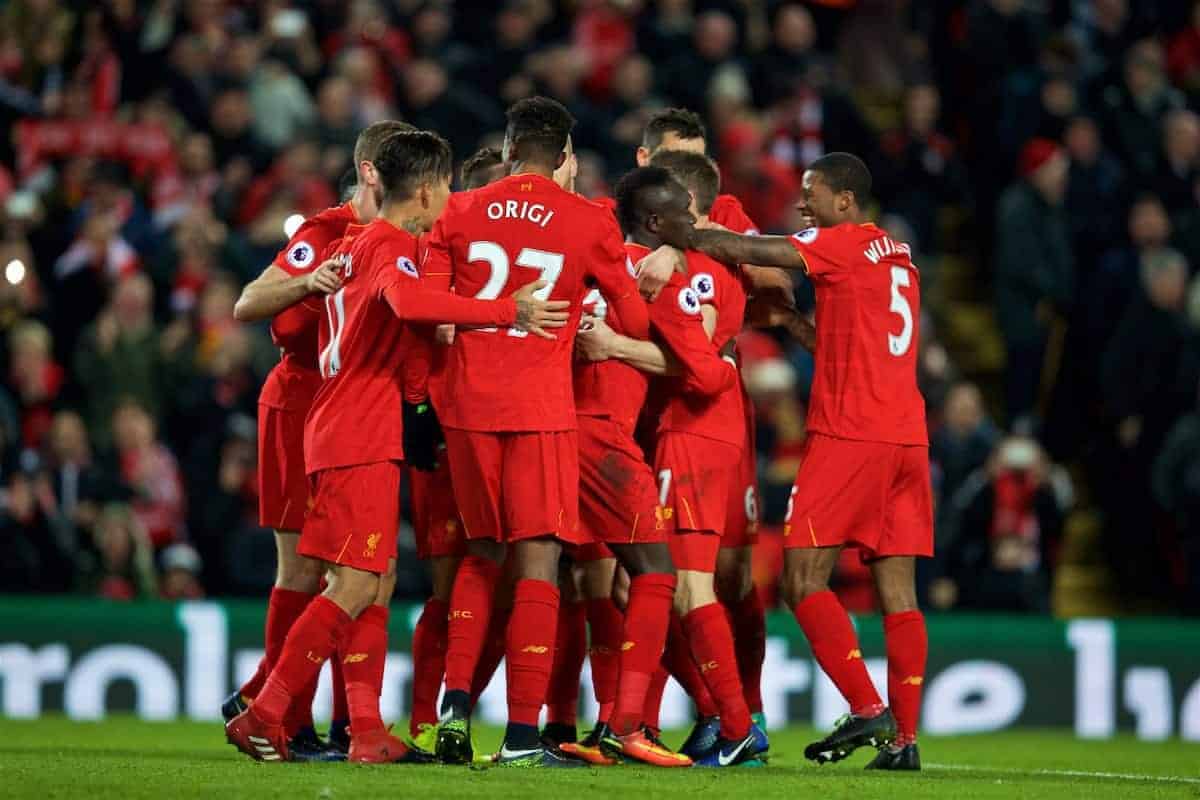 Liverpool came from behind to defeat Stoke City by four goals to one on Tuesday night, cruising to victory after a shaky start from the defence.

Claimed a cross well early on in the game but was conceding a goal at his near post shortly after. He managed to get a hand on the ball but this only diverted it into the net.

Made a good save from a Joe Allen shot but was lucky the ball didn’t fall to a number of Stoke attackers in the area.

More of the same from Clyne. Struggled defensively along with his team-mates in the opening 20 minutes, but his performance improved as the game progressed and the Stoke attacks dissipated in midfield.

Managed a shot on goal in the second half—a header no less!

Failed to track the run of Jonathan Walters as the Stoke striker headed in Erik Pieters’ cross. Was out of position shortly after as Stoke almost scored but for a block by Ragnar Klavan.

Some of his attacking play was good, though, and Lovren made a couple of good crosses into the box, having found himself in attacking positions following set pieces.

Defended better in the second half, making noticeable interventions against Allen and Ramadan Sobhi, but Stoke’s attacks were few and far between by this time. Not as impressive as he was against Everton but still made some good defensive plays including an important block from Pieters.

Was neat and tidy with his passing, and finished the game as the team’s best passer with 89 percent success.

Made a few good crosses into the box, and gets an assist for Firmino’s goal at the end of a good team move.

Linked the play well from his left-back position, and also managed to get a few shots off though never looked like scoring.

The back four were defensively uncertain at times, but this problem was solved by the fact Stoke didn’t really attack after the opening half-hour. A similar performance to the one he gave against Everton. Is starting to show some bite in midfield but still lacks the quality on the ball of the likes of Georginio Wijnaldum and Adam Lallana.

Had a couple of shots but neither threatened the Stoke goal.

A few of his forward passes went wayward, but his ball out to Divock Origi, with a bit of help from Glen Johnson, led to the third goal.

The best passer in Liverpool’s midfield, as is often the case with the Dutchman.

Can’t quite make things happen in the final third, but it doesn’t help when team-mates take the ball away from him in good shooting positions, as Lallana did to him. Started the game slowly as he struggled to cope with the stronger opponent in Giannelli Imbula.

Fared better against Glenn Whelan though, and scored his side’s first following a neat one-two with former team-mate Johnson.

Played a part in the second too, as having drifted over to the left he allowed Firmino to move inside and the ball arrived at the feet of the Brazilian via Milner.

Offered a good outlet and regularly found space behind Pieters in the right channel.

Was sloppy at times but settled into the game once he realised how much time and space the opposition were going to give him on that side.

He often drifted inside, and it was the pressure he put on Imbula that forced the own goal for the third. Looked dangerous when he could get into the game, and scored his side’s second despite having skied one over the bar minutes earlier.

His left-footed shot from distance hit both posts before nestling in the goal in front of the Kop.

Was tricky on the ball and tracked back in defence to help Milner with Mame Diouf, and it was one of his best games since he moved out to the left.

His excellent pass out to Mane led to the first goal, and his holdup play improved as he got used to Ryan Shawcross’ physicality.

Looked slow to react at times during the buildup, but is anything but slow across the ground and he troubled Shawcross and Bruno Martins Indi throughout.

He played the cross in for the third goal, and generally worked hard until he was replaced by Daniel Sturridge.

A typical display of drive and determination from midfield, even though there weren’t any outstanding moments, positive or negative.

Another impressive substitute appearance from the striker, whose role is likely to increase given the amount of games in January.

He’d been on the pitch for less than a minute when he intercepted a Shawcross backpass and rounded Lee Grant to score.

Drops deep to link the play and causes problems for the opposition with his skill and movement in the final third.

Was given a 15-minute run out on the left wing, and the Spaniard’s cameo contained all we’ve come to expect from a Moreno performance.

He was giving the ball away one minute, then looking like the side’s most dangerous attacker the next.

Almost got on the scoresheet but his acrobatic effort was blocked close to the line. The manager went with the same side which started against Everton, and there was only one change to the substitutes’ bench as Ovie Ejaria took Trent Alexander-Arnold‘s seat.

With a hectic schedule on the horizon, it was the start of a run of games where Klopp will need to manage the squad well.

A few players who are likely to feature in the coming weeks were given minutes at the end of the game to gain a bit of match sharpness, while those who started will gain confidence from this convincing win.

Tactically the team exploited the space behind Stoke left-back Pieters, and the opposition were also flummoxed when Mane and Firmino cut in from wide positions.

Despite going behind early on, Klopp’s team stuck to their plan and ran out convincing winners.

Pep Guardiola watched on from the stands, and a bigger test than the one provided by Stoke will come against his Manchester City side on New Year’s Eve.