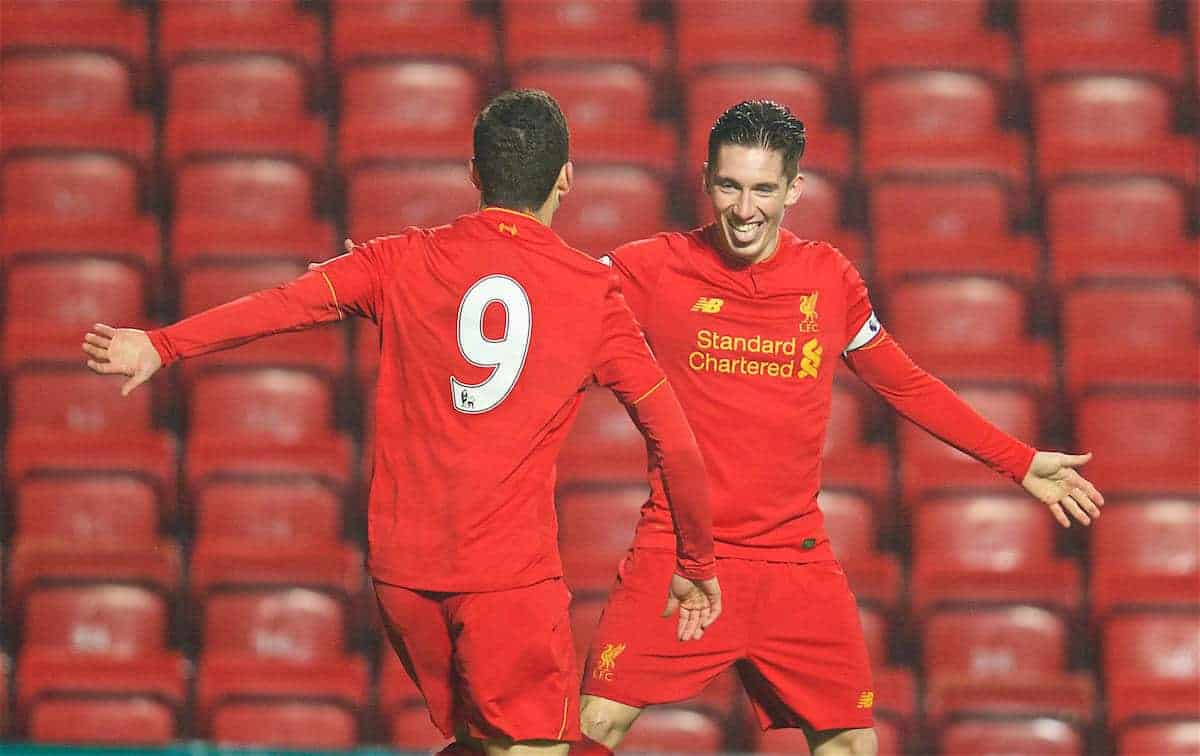 Two goals from Welsh winger Harry Wilson helped Liverpool U23s on their way to a 3-2 win over Arsenal U23s at Anfield.

It was a change of pace for Anfield following the first team’s disappointing 2-2 draw with West Ham just over 24 hours earlier.

The smattering of fans who settled in the middle of Kop were rewarded for venturing out on a cool Monday night in December with a familiar looking Liverpool side.

Of the starting lineup, only Shamal George, Brooks Lennon and Harry Wilson are yet to make a first-team appearance but for the latter a debut can’t be far off.

Captaining the Young Reds, Wilson opened the scoring after just two minutes, getting on the end of Tiago Ilori’s ball over the defence before chipping exquisitely over Arsenal ‘keeper Matt Macey.

The visitors equalised almost immediately when Kevin Stewart lost the ball in midfield, allowing Jeff Reine-Adelaide to surge though the midfield and eventually set up Stephy Mavididi after good work from Reiss Nelson on the right wing.

Liverpool retook the lead when Cameron Brannagan was obstructed by Macey in a ground skirmish, referee Steven Rushton pointed to the penalty spot and Wilson tucked the kick low into the corner for his second.

The game settled down after the early exchange of goals, though Liverpool ‘keeper George was called into action after 20 minutes, saving well with his feet from the lively Nelson.

Most of this Liverpool side look comfortable on the ball and Joe Gomez, returning to match fitness following his long layoff with a injury, had a good first half alongside Mamadou Sakho in the heart of the defence.

Gomez did lose the ball sloppily on one occasion, but used his considerable strength to win it back with ease.

With just under half an hour gone, Sheyi Ojo extended Liverpool’s lead when he latched on to Pedro Chirivella‘s excellent through ball and finished calmly in front of the eerily empty Anfield Road End. The Young Reds attacked the Kop in the second half, as is the tradition, but the game quietened down following the first-half goal glut.

Liverpool began to go through the motions, but were awoken when Mavididi scored his second. Ojo lost the ball high up the pitch and Arsenal broke quickly and their striker found space to score.

George was forced into two saves shortly after which kept his side ahead as Arsenal began to threaten.

A fingertip save deflected Chris Willock’s shot around the post, and he denied substitute Eddie Nketiah with 10 minutes to go. The No. 1 also rushed off his line to save bravely at the feet of Bola, following a mishit Jordan Williams pass.

Liverpool ‘keepers have been under the microscope of late, but in tonight’s more relaxed atmosphere it was a competent, busy display from George.

The game petered out in the last five minutes and Mick Garrity’s side held on for the win. With Michael Beale having left the club to become Rogerio Ceni’s assistant at Sao Paulo, assistant manager Garrity is stepping in until a permanent replacement is found.

The stand-in manager will have been pleased with what he saw in attack, but might have a few concerns about the two lost balls which led to goals.

Arsenal always possess a technically gifted group of players at this level but despite their valiant attempt at a second-half comeback, the relatively experienced Liverpool side proved too much for them.