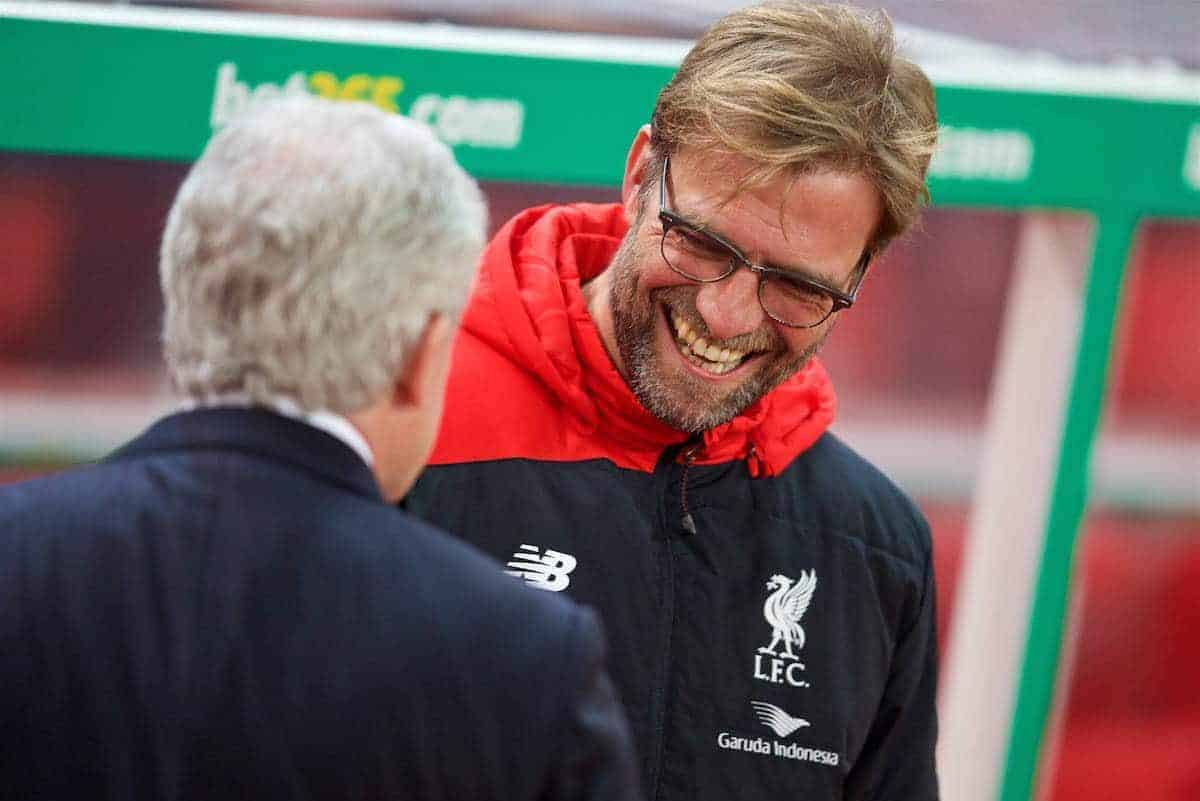 The Reds are back to winning ways and want to keep the good feeling going after a last-minute derby win at Goodison Park—and after two away victories on the spin it’s back to Anfield for the visit of Stoke City. Here’s everything you need to know about Mark Hughes’ men.

Stoke are changeable. They still have the overall approach of being a side who want to build fast through the midfield zones, but set plays and direct passes seem to give them more offensive threat than anything else.

Hughes sets his team up in a standard 4-2-3-1 and the wide players are a force on the counter-attack, but they lack something in consistency, particularly up front.

Like a few of the mid-table teams, Stoke have a number of players who are interchangeable in their attacking roles without overly affecting the quality of the team, either for better or worse.

The non-stop running and aggression through Stoke’s spine still shines brightly. Glenn Whelan, Joe Allen and Jon Walters are all likely starters and none will let Liverpool settle on the ball for a minute, and if Charlie Adam gets the nod over Gianelli Imbula there’s another familiar face who ups his game against his old side.

In addition, there are a fair few players in the Potters’ side who possess cannons for feet—close them down quickly and stop the long shot opportunities must be the message for the deepest players, centre-backs and midfielders alike.

Stoke rank fourth in the league for shots outside the box and in Adam, Imbula, Walters or even Bojan and Shaqiri, cutting in from the flanks, they can shoot at will.

A muddled defence, primarily. Not so long ago, Hughes was down to three fit defenders and had to shake up his tactical plan; they have a back four again now but the chopping and changing and absence of first-choice goalkeeper means Stoke have been porous at the back all season long. They’ve only lost one of their last five away games, but while Pieters is a formidable full-back, the Shawcross-Martins Indi partnership isn’t quite at watertight level just yet.

Former Red Joe Allen is proving incredibly important for the Potters, not just with his early-season goals but in winning the ball back and quickly starting counters from anywhere on the pitch.

He’s in the top 10 tacklers of the Premier League this season and his link play with the striker—running off flick-ons, playing one-twos and getting inside the box—is definitely something the home defence will need to watch.

For Liverpool, they should be able to score at home against a defence which is far from watertight, so a third clean sheet in a row has to be the priority even if this match is a scrappy battle, or one which the Reds dominate but don’t show a clinical edge in. Simon Mignolet, keep doing your thing.

Marko Arnautovic is suspended after being sent-off two games ago. Goalkeeper Jack Butland is out injured for the long term and defenders Marc Muniesa, Phil Bardsley and Geoff Cameron have also been sidelined.