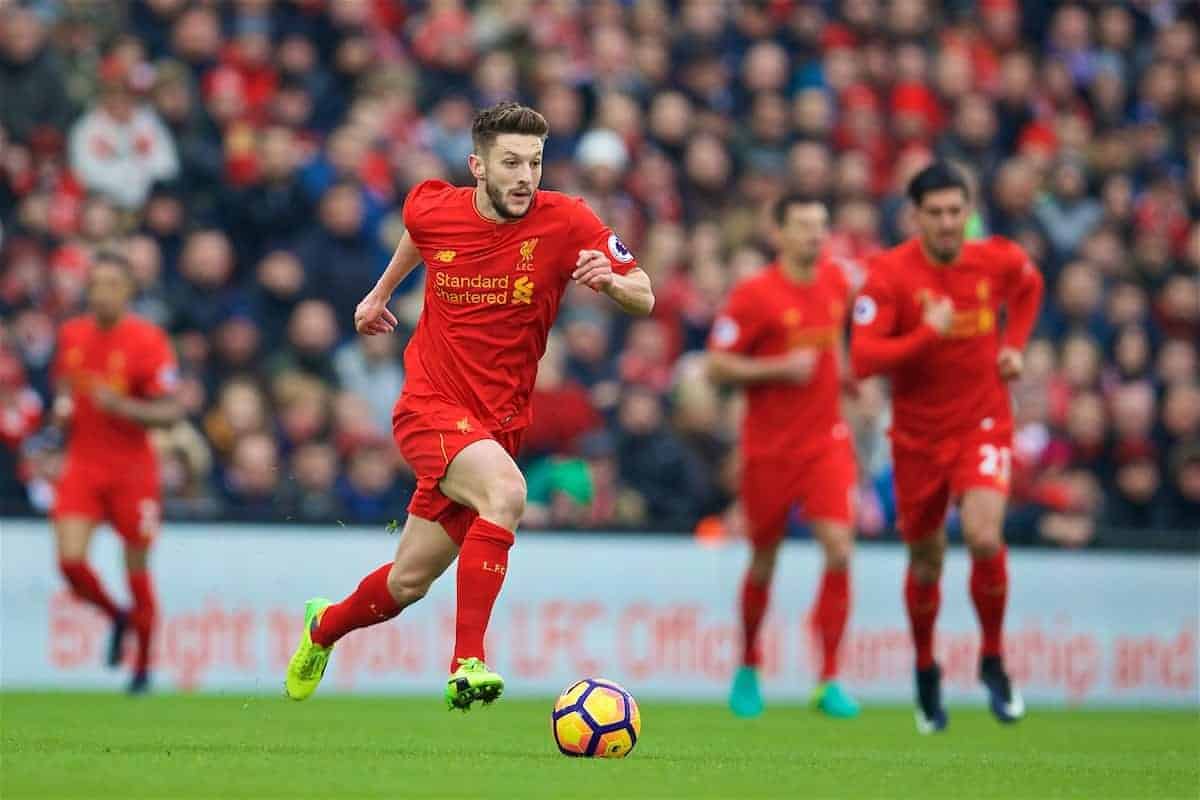 By using Adam Lallana in the front three in Sadio Mane‘s absence, Jurgen Klopp has weakened two key areas of the side.

As defeats during Klopp’s tenure go, few have felt more damaging than the 3-2 loss to Swansea City on Saturday afternoon.

To some pre-match, a victory seemed a given; considering how poor the Swans have been of late, with a goal-fest widely expected to be delivered at Anfield.

However, except for Roberto Firmino, no Liverpool player could leave Anfield with their head held high, as a pathetic performance left their title hopes in tatters.

While the players unquestionably deserve criticism for the abject offering they gave the home supporters, this was a day when Klopp had to shoulder most of the blame.

The manager made several errors in terms of his line-up, which has been regularly happening since Mane left for Africa Cup of Nations duty. With Mane still missing, it was again intriguing to see who Klopp deployed on the right-hand side of the front-three.

Frustratingly, he again opted for Lallana. And again it didn’t work.

The England international is probably the leading contender for Liverpool’s Player of the Year award this season, and it has been from the midfield three that he has shone so brightly.

Taking a key man out of his best position is always a big risk and while a front-three of Philippe Coutinho, Lallana and Firmino looks good on paper, it lacks balance.

Lallana lacks the pace of Mane to be able to run in behind the opposition defence, and his natural preference is to come to the ball every time. It made life far easier for Swansea’s defence.

Nathaniel Clyne, very poor by his standards, was often left with no option down the line, and Liverpool’s play became horribly predictable.

Many had been calling for Lallana to return to the midfield three, and it was very disappointing to see Klopp decide against it.

Against teams of Swansea’s stature, especially at home, you have to be more bold in your approach and ditch one of the less creative midfielders. Emre Can has been under-performing all season and it was hard not to feel disappointed when he was named in the starting line-up.

Few players look as clumsy and ineffective when out of form as Can and on an afternoon when so many played badly, he was the worst of the lot.

His decision-making is far too ponderous at the moment, he takes an age to get into his stride and far too many passes were either aimless or lacking creativity.

Can can be effective in the bigger games, when a more robust approach is required in the middle of the park, but matches against lesser teams bring out the very worst in him.

So much of Liverpool’s early-season brilliance was built around the dynamic midfield triumvirate of Jordan Henderson, Georginio Wijnaldum and Lallana, and we must start seeing that again on a weekly basis.

Can remains a young player who has been overly criticised by some, but his form is woeful and he should be nowhere Klopp’s starting XI at the moment.

So who should occupy that wide right role in Mane’s absence?

A new signing would have been nice, but that hasn’t arrived, and we’ve seen again how much more effective Firmino is in the central no.9 now.

So why not play Sturridge from the right? He wouldn’t be a like-for-like replacement for Mane in terms of his style, but it would mean keeping the rest of the team’s shape at its strongest.

Things haven’t gone Sturridge’s way at all this season, and he has never managed to get a solid run in the team. Strikers need that if they are to hit top gear.

Sturridge knows himself that some of his performances have not been good enough in 2016/17, but he has still been harshly treated by Klopp.

He should have been in ahead of the infuriating Divock Origi a number of times, and Saturday’s miserable defeat looked ideal for him to start.

Admittedly, using him on the right may not be ideal, but the intelligence and ability to interchange that he possesses would not have made it an issue.

When you come up against teams with packed defences, you rely on moments of individual magic. Sturridge has exactly that in his locker, but only a second-half cameo came his way.

Hindsight can be a wonderful thing at times, but had Lallana played in midfield in place of Can, with Sturridge on the right, Liverpool would likely have overcome Swansea.

In fact, bringing on Origi straight after Firmino made it 2-2 was another mistake by Klopp, and also worked against his team.

The Brazilian was thriving centrally alongside Sturridge, Lallana had finally been moved into a central role at the tip of the midfield diamond and Liverpool were in the ascendancy.

Origi’s arrival completely blunted the Reds’ rhythm, and Swansea took advantage of it.

Bad day at the office

We as fans are allowed to discuss and criticise Klopp when he gets it wrong, regardless of how brilliant he is.

He has been a sensational appointment, and will hopefully go on to achieve special things at Anfield, but every great manager throughout history has encountered bad days.

There was absolutely no need to play all three of Henderson, Wijnaldum and Can, and using Lallana in the front three is a glaring mistake.

Can should be nowhere near the starting lineup, particularly in his current slump.

Sturridge also has to be involved from the outset, and if he’s not starting matches of this ilk, you have to wonder where his future lies.

Saturday was a tough 90 minutes to stomach, and one that looks likely to have ended the title dream for yet another year.

It is often easier to look at the players and blame them for such a deflating loss, but Klopp is the man who was most culpable.