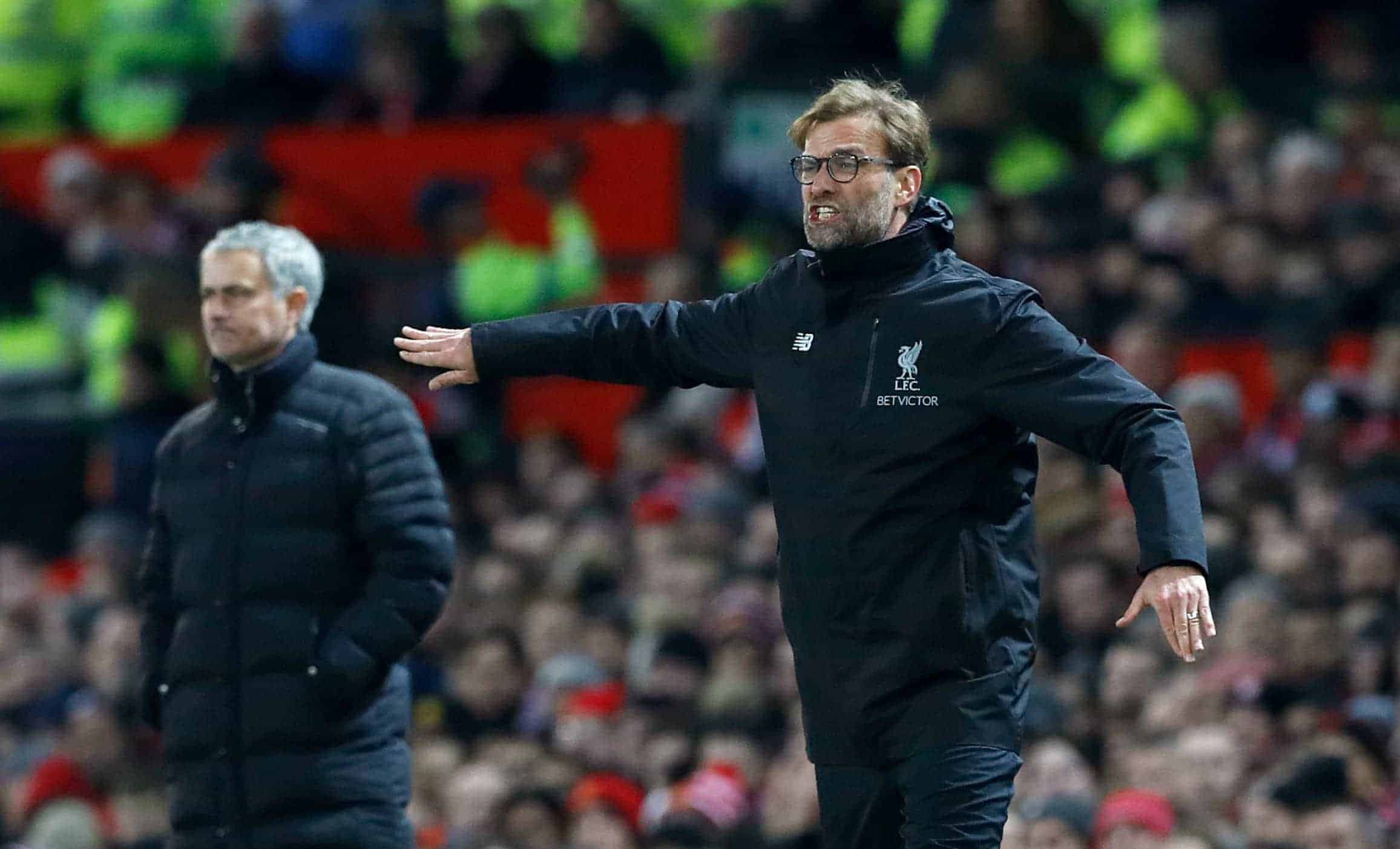 Liverpool were unable to hold on to a one-goal lead and ended up with a point from a battle at Old Trafford. Jurgen Klopp has only lost to Jose Mourinho once in the seven games between the two, winning three and drawing three.

Klopp set his team up in a diamond formation which had Adam Lallana breaking between the two wide forwards Divock Origi and Roberto Firmino.

At times it was as if there were three attacking midfielders and no forwards, as Liverpool looked to press without the ball and allow themselves space to run at the opposition back line when in possession.

Lallana led the press from the middle before dropping back into midfield if United managed to work the the ball into midfield.

This caused trouble for the opposition defence in the first half, and then when Liverpool had the ball the pace and tenacity of Origi had them worried too.

Mourinho’s side couldn’t cope with the way Klopp had his team set up so he changed things at half-time, introducing Wayne Rooney in replace of holding midfielder Michael Carrick.

This saw United come into the game as Paul Pogba and Ander Herrera were able to take more control, and Klopp responded by introducing his own possession hogger, Philippe Coutinho.

The Portuguese went on to introduce his trump card, Marouane Fellaini, with 15-minutes to go, and the move contributed to the equalising goal for Ibrahimovic, meaning the battle between the two managers this season remains all-square.

Milner the man on the spot Stepping up to take a penalty for Liverpool at Old Trafford, against a goalkeeper considered one of the best in the world, requires a cool head and great technique.

Milner displayed both of these characteristics as he executed his spot-kick perfectly, beating David De Gea even though the Spanish goalkeeper dived the right way.

Not long after this he was tracking back behind the defence, covering for Ragnar Klavan, who misjudged an attempt to play an offside trap, putting pressure on Henrikh Mkhitaryan as he broke through on goal.

Rooney tried to take the left-back out of the game by standing on his ankle in the second half, but Milner soldiered on.

Mignolet keeps the Reds in the game The number one spot has been a problem for Liverpool this season, but in recent weeks both stoppers have pulled some fine saves out of the bag.

Here the Belgian made important stops in the first half to deny Ibrahimovic and Mkhitaryan.

The save from the big Swede came following a free-kick which the forward tried to sneak around the wall, but Mignolet was wise to it.

The stop from Mkhitaryan was more impressive, and reminiscent of a Danish goalkeeper who use to operate between the posts in these parts.

He made an impressive save with his feet from Rooney in the second half, and even though the flag was up for offside he wasn’t to know this at the time.

He was eventually beaten by a looping Ibrahimovic header which he could do nothing about, but he will still be disappointed to let one in after such a good display.

Matip missed in jagged back line Dejan Lovren and Klavan had a torrid time at Southampton in the previous game, and at times this game was equally as sloppy from the defensive duo.

Liverpool’s best defenders are at the front in midfield, but if they’re to become a real force they need to tighten up at the back.

The amount of time Lovren has had to prove his worth, and the fact that Klavan is only meant to be the fourth choice in this position suggests that this issue is with personnel rather than system.

The team are currently in a farcical situation where Joel Matip is unable to play for the club because Cameroon haven’t told FIFA that he can.

Until this situation is resolved Klopp has the choice of persisting with the current duo, or adding promising young defender Joe Gomez to the mix.

Or he could dip into the transfer market, this being January and all.

Trip away to Home Park

The team will get just two full days to rest before they make the long trip down to the south coast for their FA Cup Third Round replay against Plymouth.

Klopp picked the youngest lineup in Liverpool’s history when the sides met at Anfield, and he might have to make changes again to rest his players who are challenging on three fronts.

The top of the league is getting tighter by the game. All the sides who think they’re challenging to catch Chelsea at the top might also be in danger of dropping out of the top four, as happened to Manchester City this weekend.

They also find themselves a goal down in their two-legged League Cup semi-final against Southampton, with a game at Anfield to come in which they’ll be expected to turn the tie around.

It will stretch the clubs resources to the maximum, and should the right player be available in the market then making sure they’re signed could determine Liverpool’s fortunes come May, especially in the league.