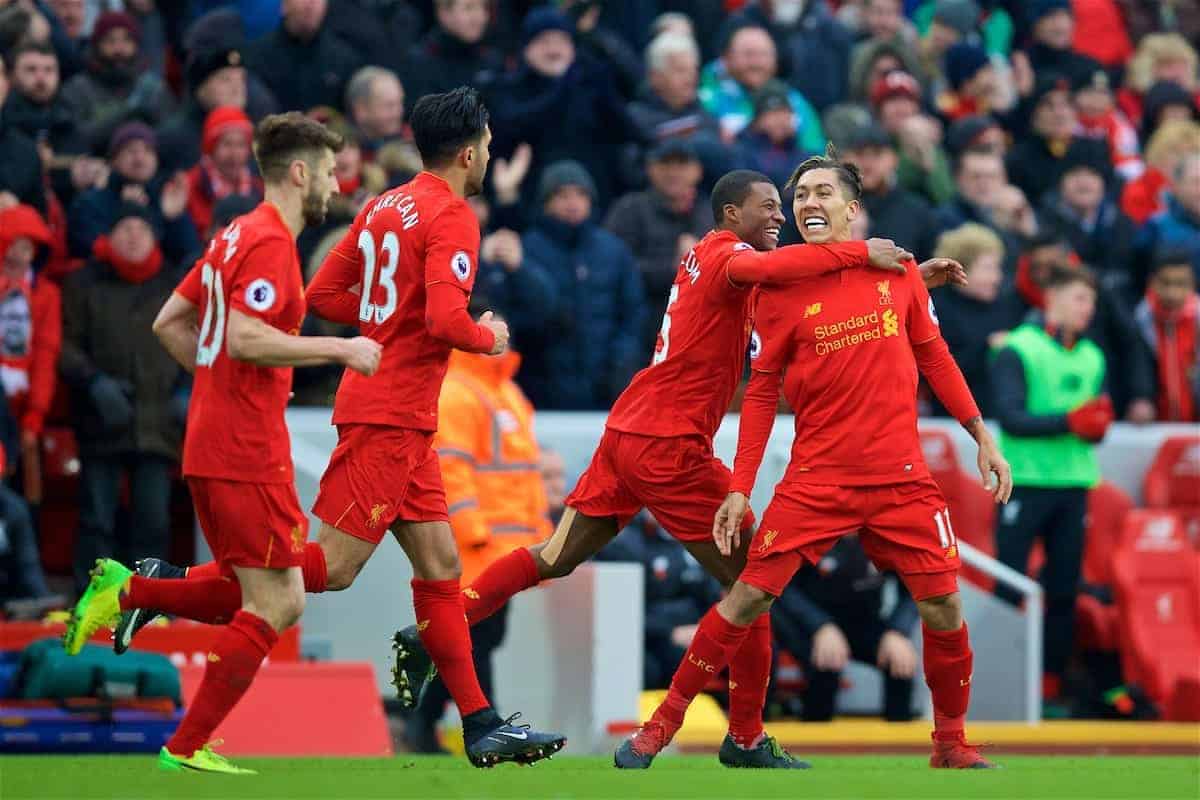 Liverpool must overturn a 1-0 first-leg deficit at home to Southampton on Wednesday evening if they are to reach the League Cup final at Wembley next month.

Do you wonder why you bother with football at times?

That 3-2 defeat at home to Swansea City on Saturday was a horribly depressing 90 minutes, as Liverpool’s title dreams were dealt an enormous blow.

Many predicted that to be the game when the Reds got back on track, but instead, it has made things feel even more desperate.

Wednesday provides a great opportunity for Jurgen Klopp and his players to bounce back emphatically, however, as Southampton come to town.

Saints were more than deserving of their 1-0 win in the first-leg at St Mary’s – one of many below-par Liverpool displays we have seen in 2017.

The Reds need to start displaying that fluent, care-free football that blew teams away back in the autumn, rather than the one-dimensional play that we have had to sit through of late.

Anfield needs to be at its ferocious best for the visit of Claude Puel’s side, as Liverpool look to keep their hopes of a first piece of silverware since 2012 alive.

Extra-time and penalties may be required on Merseyside, but however the match pans out, securing another trip to Wembley is paramount.

It is time Liverpool delivered another big performance. We spoke to Saints fan and writer Richard Brereton (@bagel_buns) ahead of the game – here’s a snippet of the interview.

How key do you think the missed chances will be?

The missed chances shouldn’t be too much of an issue if Southampton approach the second-leg like they did the first.

Liverpool have enough defensive weaknesses that there will be opportunities for Saints to extend their lead, particularly if we press you high up the pitch.

Southampton need to ensure that they are solid defensively and use their energy wisely by pressing in either third whilst not wasting energy pressing pointlessly in the centre of the pitch.

The longer the game goes on without Liverpool scoring, the more desperate they Merseyside team will become, causing them to take more risks and leaving room for the counter-attack.

Read the interview with Richard in full here. Klopp is expected to go with a strong starting lineup, with the FA Cup fourth round clash at home to Wolves on Saturday allowing him to rest key men.

Joel Matip will come back into the defence after a lengthy absence, with Ragnar Klavan the man likely to make way for the towering 25-year-old.

Adam Lallana may move into his preferred midfield role – something Klopp failed to do against Swansea – and that would see the out-of-form Emre Can relegated to the substitutes bench.

That frees up a starting berth for either Daniel Sturridge or Divock Origi on the right – Roberto Firmino has to play centrally – with the former the man Klopp should opt for.

Loris Karius is likely to replace Simon Mignolet in goal, as has been the case in cup competitions this season, while Nathaniel Clyne could play, despite not being fully fit against the Swans.

Southampton are sweating over the fitness of Virgil van Dijk and Steven Davis, but both should start. Otherwise, Puel has few concerns. Klopp was bullish in his pre-match press conference, and called upon both his players and the Anfield crowd to up their game:

“If we win every game from now, everybody sits here and smiles.

“Life is no guarantee. A football season is exactly the same, everybody wants to, but we have the opportunity to do our best everyday.

“My job is to tell the boys. Let’s fight again, this time Southampton at home.

UK viewers: Liverpool vs. Southampton is being shown live on Sky Sports 1 in the UK, which is available to live stream with a NOW TV day pass.

US viewers: Liverpool vs. Southampton is being shown live on beIN Sports in the US, which is available to live stream with FuboTV.

Get a 24 hour free trial here to watch the match live.

We will be running our matchday live blog from 7:15pm, with regular updates during the game and plenty of content leading up to it.