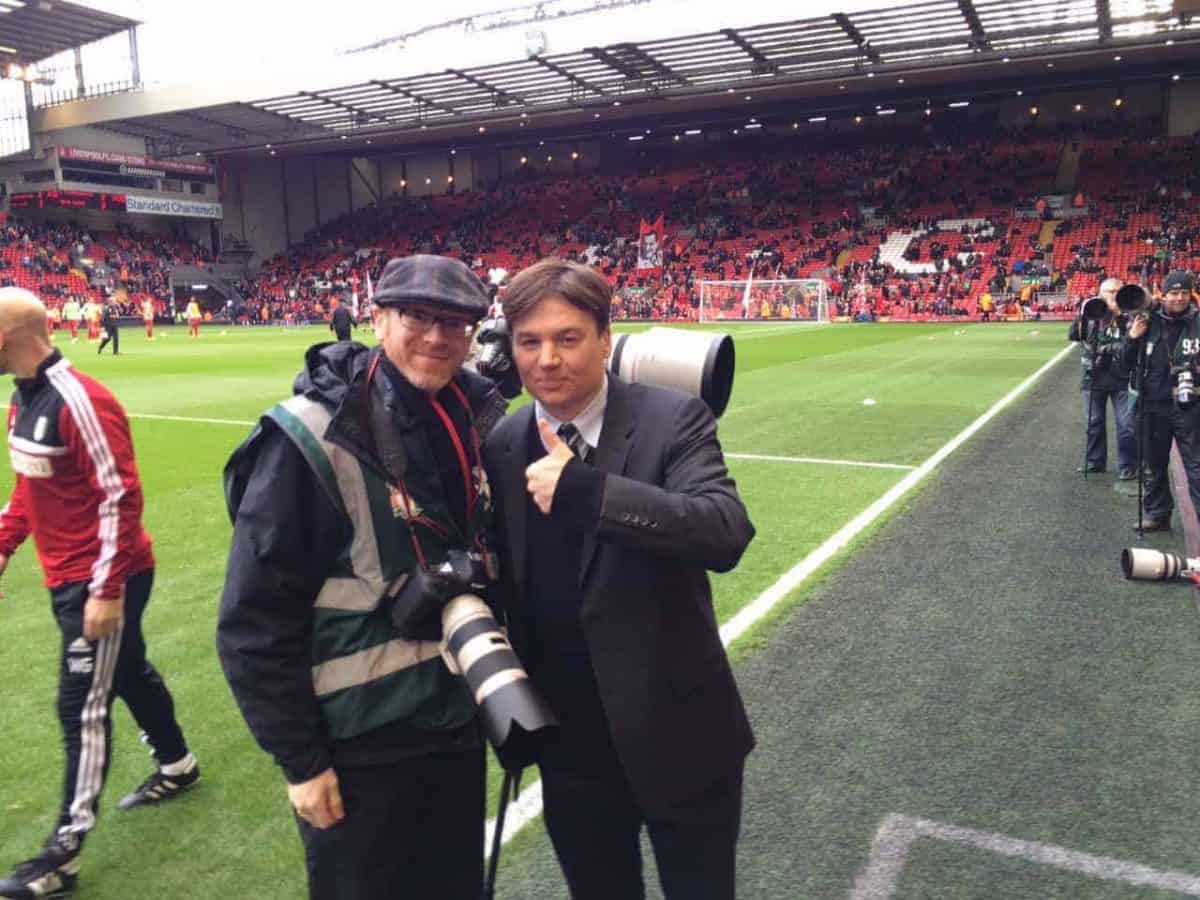 Continuing our matchday Q&A series, Dave Rawcliffe of Propaganda Photo provides interesting insight into the role of a photographer at Anfield and more.

David runs Propaganda, a local sports media agency based in Liverpool that specialises in images of Liverpool FC. You’ll be familiar with lots of Dave’s work as he provides most of the images used here on This Is Anfield.

He’s been shooting Liverpool games since 1992 and is a passionate supporter, having only missed a handful of games in the last 25 years.

We speak to Dave about his regular matchday routines, the problems photographers face, and plenty more.

Tell us about your typical match day, for a 3pm kick off. What’s your pre-match routine? What time do you get to Anfield? How long after the game are you there editing photo and video?

My match-day begins about four hours before kick-off. I’ll be preparing my equipment for the game, checking the weather report to decide what lenses to take or if I’ll need waterproof covers. If it’s dry I might take an extra camera to use remotely behind the goal.

If it’s good light, maybe I’ll swap out my 400mm for a 200-400mm zoom. Then it’s a quick check of the news sites to see what’s happening around the game, who’s returning from injury etc.

I get to Anfield three hours before kick-off. The photographers work from a room in the Centenary Stand. I’ll sign in there to collect my match-day accreditation with Derek, who looks after all the snappers. He’s been working at Anfield for decades, and seen it all, from winning numerous Championships to tear gas, to basically every legend that’s ever walked down the tunnel. Sadly now we don’t walk out of the tunnel ourselves, we now work from across the pitch.

Our working room is very basic, sometimes we have sandwiches provided. The biggest issue we have is getting a reliable internet connection. The wifi is patchy and many of the ethernet ports pitch-side don’t work, so the photographer’s first job when they arrive is to go into the stadium to find a port that works and plug in their cable in ready for the game.

In the photographers’ room, or wire room as we still call it, I will set-up my laptop and begin to do the preparation for the game which includes updating the team lists, writing a template meta-data caption, creating a gallery on our archive for our clients to download from. Once that’s done, I will pop over to Home Baked for a bite to eat as they have some fabulous vegetarian pies and great coffee.

After that, it’s out to shoot some preview pictures for the websites and blogs. The huge interest around the world in LFC means that the editorial match-day begins very early with websites and newspapers running minute-by-minute blogs starting hours before kick-off. So I will begin shooting some ‘colour’ around the stadium; fans arriving, the obligatory tourist half-and-half scarves (yes, I despise them, but the tourists love them), GVs (general views) of the ground, the team bus arriving etc.

Then it’s off to the next job, shooting the players’ warm-up. Specifically looking at players returning from injury or making their debut, and, of course, plenty of pics of Jürgen Klopp intensely checking out the opposition team’s warm-up. All the while I’ll be making trips back to my laptop to caption, edit and transmit the images as quickly as possible.

As the teams come out I’ll be near the dug-out with my colleagues shooting the amazing scenes of the Spion Kop in full voice, searching out for famous faces in the Director’s Box, and waiting for Jürgen and the team to come out.

Then it’s a race back to my working position behind the goal, hoping Jordan Henderson hasn’t lost the toss, which would mean grabbing all my equipment and running down to the opposite end just as the game’s kicking off. I wish they’d scrap the coin toss or at least pick an end 45 minutes before the game like they do in Rugby League.

I work behind the goal, near the corner flag. At the Anfield Road End the photographers are only allowed to work on the Main Stand side, the other side being reserved for the club photographer. During the game I will edit and caption important incidents as soon as they happen, transmitting them to my clients immediately. Goals, celebrations, crunching tackles. They all need to be moved as soon as possible.

At the Kop End there is very little space to work, as Anfield is such a compact stadium, so it’s awkward to shoot from that position and edit my images at the same time.

Anfield is a great stadium for football, but as a working photographer in the Premier League it presents many challenges. One of the biggest issues used to be the floodlights. The previous ones gave an awful yellow colour cast which was different in every frame and that made it hard to correct for in post production. If anyone ever followed me on Twitter they’d be familiar with my constant moaning about how bad they were. But now we have fantastically brilliant, bright floodlights, with a uniform colour! I cannot begin to tell you how happy I am about that!

There’s plenty of challenges working at Anfield, the weather, the comms, the positions, but despite all that, it’s still a wonderful place to go and take pictures.

I’ve been shooting Liverpool for 25 years now and every game is still a thrill, to be capturing the historic moments in the club’s history. From Robbie Fowler’s five goals against Fulham in the League Cup, to the glory of Istanbul and the dark, dark days of Roy Hodgson, it’s been an amazing journey and a very privileged experience.

How do Anfield’s facilities compare to other Premier League grounds?

The new Main Stand is great, mainly because it brought with it new floodlights. We waited a long time for that investment in the stadium. There’s still a lot to be improved upon if Anfield is to match the facilities of others Premier League grounds.

Regarding food, visit Home Baked, a fabulous non-profit community bakery across the street from the Kop. They do great vegetarian pies, jam scones, cakes, and their coffee is fabulous too.

Most of the photographers go to the Sing Fong chippy. When I do I always get their Salt and Pepper chips. If you haven’t tried them then you’ve been missing out!

I think it’s important to support the local Anfield businesses. I hate the burger vans that drive in on a match-day. The Anfield bricks and mortar businesses need to survive every week when there’s no football on, so to see other companies come in and take business away from them really saddens me.

My advice to any supporter visiting Anfield would be to go and buy their pre-match food and drink from the local businesses and put the money directly into the Anfield economy.

Then get into the ground early, soak up the history of the place, get your singing voice ready and back the team for 90 minutes. It’s easy to go and sit there expecting to be entertained, but as as Liverpool fan you’re the 12th man (and woman). You have a job to do also!

And don’t leave early. Stay to the end. You might need an extra 20 minutes in the car to get home, but the team need your support right until the end, whether it’s 1-1 or we’re cruising to a 5-0 win over the mancs.

A lot of people think safe standing, ie rail seats, are the answer, but unless fans can move around and join their mates that won’t solve anything. Getting more youngsters into the ground would help also. We need more kids to get into the habit of going to the match regularly.

And a few vegan food options wouldn’t hurt either! ;-)