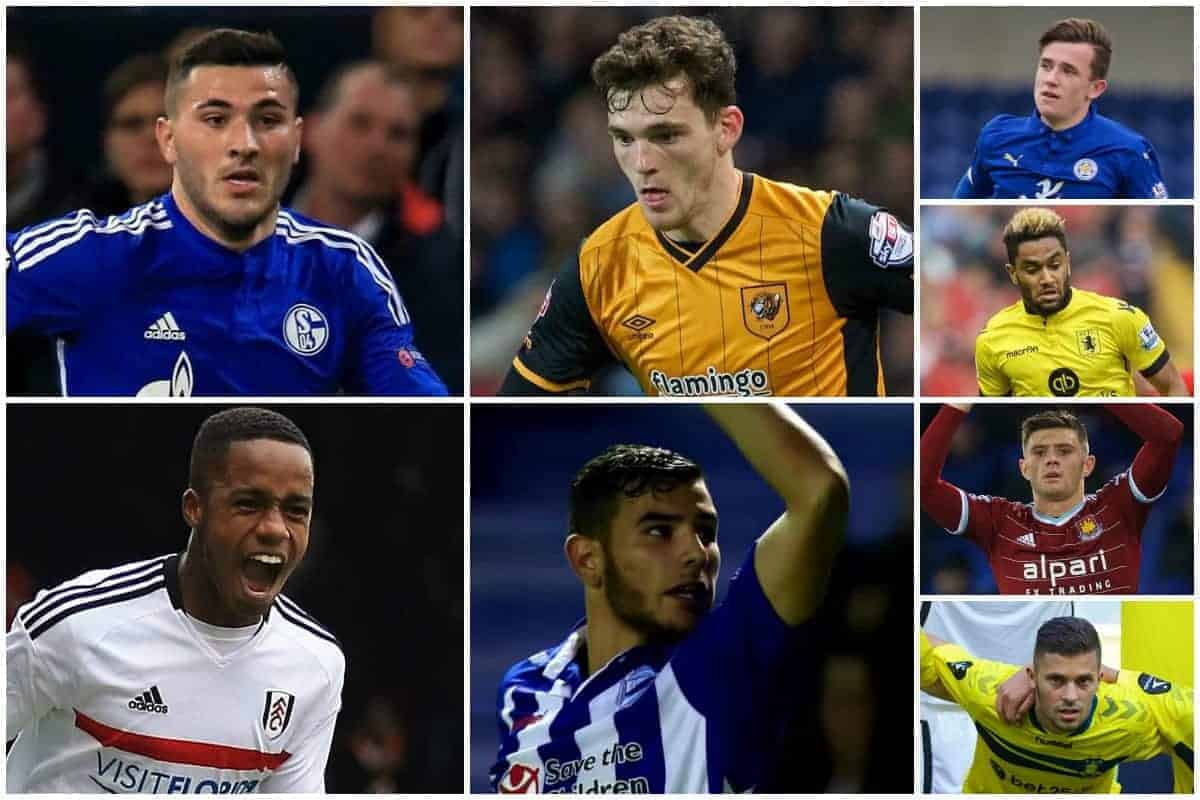 With Liverpool likely to dip in the transfer market for a new left-back this summer, we take a look at some of the Reds’ potential targets.

Jurgen Klopp is set to be a busy man throughout the summer, as the German builds on his first full campaign as manager at Anfield.

Despite making seven additions to his squad ahead of 2016/17, including a combined £55 million outlay on Georginio Wijnaldum and Sadio Mane, there remain glaring holes in Klopp’s squad.

And though James Milner‘s performances out of position have been admirable, one of the key roles that will need to be filled for Liverpool to progress next season is left-back.

It is rare that a club can target one player for a position and come out successful, so Klopp looks to have drawn up a longlist of potential replacements for the likely outgoing Alberto Moreno.

Here are a host of the left-backs who have already been linked with a summer move to Merseyside—some more tenuously than others.

Kolasinac is, in every aspect, the ideal target for Klopp as he seeks to bolster his left-back ranks: he’s young, accomplished, well-rounded and, crucially, available on a free transfer.

This makes the Bosnian a highly coveted talent, however, with AC Milan, Juventus, Roma, Man City and Arsenal also believed to be interested.

But if Klopp is to be bold and solve a long-term problem position in his squad, Kolasinac is his man.

Another player who will be subject of widespread interest this summer, England U19s left-back Sessegnon has been a revelation for Fulham in the Championship this season.

He has scored six goals and assisted another three in 24 games for the Cottagers, and is already operating alongside Trent Alexander-Arnold at youth international level.

While he would be an excellent signing, Sessegnon is unlikely to come in and perform as first choice, with the teenager more one for the future. While also a teenager, unlike Sessegnon, Alaves’ on-loan Atletico left-back Hernandez would be able to step into the Liverpool squad as first choice immediately.

Proven in La Liga, Hernandez is well versed in the high-energy brand of football Klopp demands at Anfield, and crucially, is also able to operate at centre-back.

Though Real Madrid are also interested, Liverpool are said to be willing to treble their contract offer in an effort to convince Hernandez to move to the Premier League. Durmisi is something of a left-field option for the Reds, and the Denmark international would not come cheap, owing to the £17 million release clause in his contract with Betis.

But the player himself acknowledged seemingly concrete interest from Klopp in January, when he said he would “of course listen to the offer.”

A versatile left-back also able to contribute moving into the attacking sector, Durmisi could be a bolt from the blue if he usurped Milner as first choice.

As his interest in Sessegnon proves, Klopp is not averse to looking towards England’s second tier for targets, praising the Championship last year as “really competitive and difficult.”

One player who may have caught his eye, according to reports, is Leeds stalwart Taylor, who like Kolasinac would be available on a free transfer.

This would ultimately involve a tribunal fee, however, but Taylor is a solid, all-round talent at left-back, and he could arrive to bolster Klopp’s options further.

Given Klopp’s adamancy regarding his left-back options this season, it is worth noting that Liverpool were eagerly pursuing Foxes youngster Chilwell last summer.

They were eventually dissuaded by Leicester‘s £10 million valuation, after having bid £7 million, and Chilwell went on to sign a new five-year contract back in July.

It could be that Liverpool revive their interest this summer, though it is likely another big-money bid would be required, and it is questionable whether Chilwell is the right target.

With Leicester unwilling to part ways with Chilwell last summer, Liverpool were said to be weighing up a move for Scotland international Robertson as an alternative.

On face value, Robertson should have been their priority over the Foxes youth product, given his experience, proven quality and his scope for further development.

Hull activated a one-year extension for Robertson’s contract in December, but this is unlikely to keep him at the KC Stadium if they are relegated.

Speculation over a possible return to Liverpool for former academy talent Cresswell came from a hugely tenuous source, with the left-back seen touching the This is Anfield sign ahead of December’s 2-2 draw.

But the possibility of Cresswell being on Klopp’s radar is certainly not to be overlooked, particularly given the likes of Taylor, Robertson and Chilwell are also linked.

Cresswell is a readymade option capable of stepping up to a higher level, and a fairytale comeback after being released by Liverpool at 15 would be an interesting move. Another dubious rumour from the past comes in the form of Aston Villa‘s impressive former Nice left-back Amavi, who was the subject of speculation from French publication L’Equipe last summer.

Amavi has recovered from a nightmare ACL injury to take up a regular role for Villa once again, and his pace and defensive nous could make him a welcome option for Klopp.

Signing Amavi would be a risk, however, and it is questionable whether any reported interest is genuine. Finally, Willems is a name regularly touted with a move to Merseyside, and this will no doubt be the case again this summer, when the Netherlands international enters the final year of his contract.

While he certainly has the physicality and attacking prowess required to operate in Klopp’s system, Willems would arguably be a like-for-like replacement for Moreno.

But if he arrives as backup to another, first-choice left-back like Kolasinac, he would be a welcome addition.