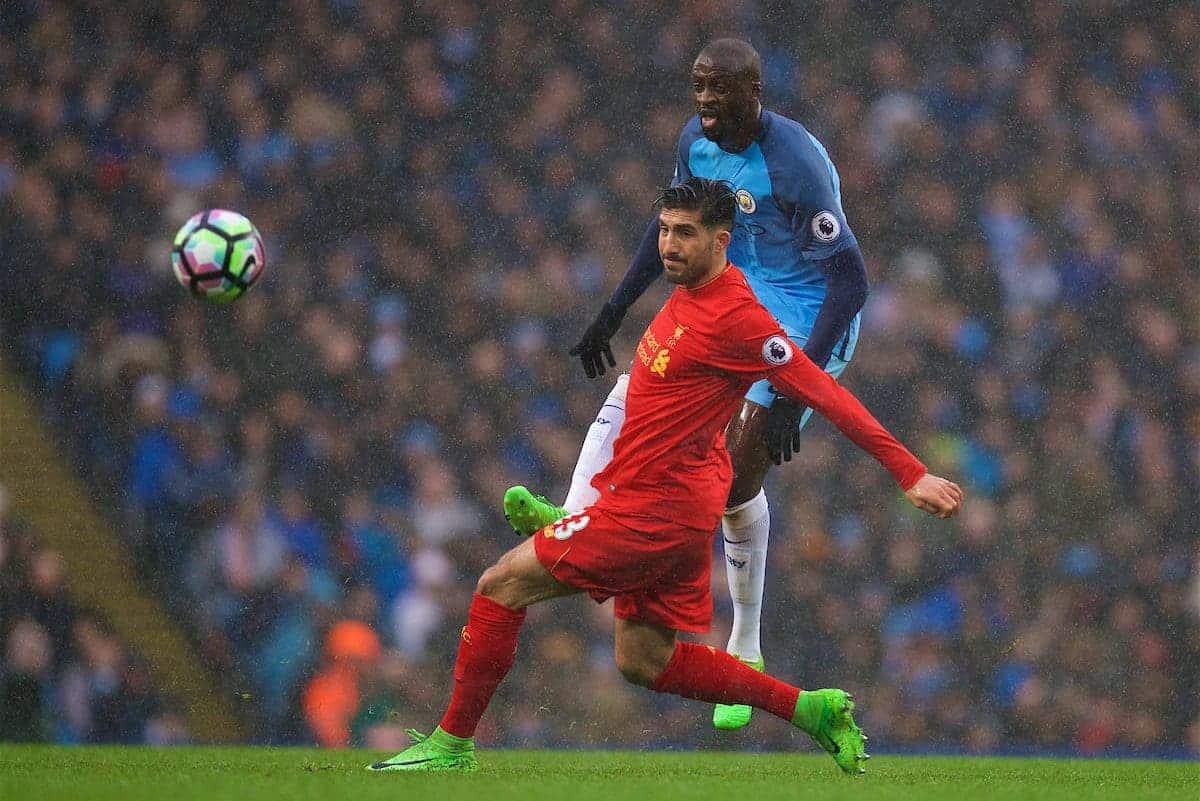 The media commended Liverpool for producing again on the big occasion, and credited the Reds’ collective team performance in the pulsating 1-1 draw at Man City.

Jurgen Klopp’s men battled to a deserved point in a thrilling top-four encounter with Pep Guardiola’s side at the Etihad Stadium.

James Milner kept his cool to slot his seventh penalty of the season and put the Reds ahead after Roberto Firmino was fouled, but Sergio Aguero grabbed City a share of the spoils as he finished from Kevin de Bruyne’s cross.

Klopp’s side deserve real credit for the way they competed in Manchester, with numerous Reds producing impressive performances in a pleasing collective display that ensured Liverpool finished the season unbeaten against top-six rivals.

Klopp can certainly be proud of his team’s efforts, ensuring the Reds maintain a solid position in the intense race for Champions League football going into the international break.

Here is how the media assessed the breathless top-four battle.

Numerous reporters felt the gripping contest was the Premier League at its best, with others feeling the game also showed why neither side will win the big prize anytime soon.

The Mail’s Ian Ladyman thought negative similarities between the sides were exposed, and highlighted why these teams are still a way from winning the title.

But their watchability comes not just from their exciting attacking play but also from their flaws and unpredictability.

On the whole, unpredictable teams do not win the Premier League. You don’t win the really big prizes if nobody knows what you are going to do next and that, for the time being, is what continues to undermine these teams and indeed everybody else who may still entertain fanciful designs of catching Antonio Conte’s monotonous side.

The Mirror’s Andy Dunn was among those who felt the match proved Liverpool won’t achieve their ultimate goals until squad depth improves:

Liverpool cannot win the league unless the squad is strengthened. No chance. Stronger options, particularly attacking options, might have been decisive from the bench.

The Telegraph’s Chris Bascombe thought the spectacle was made because both teams played into one another’s hands:

Rarely do Liverpool play a side prepared to attack them, while – Champions League tormentors Monaco aside – it is also rare for Manchester City to face opponents so eager to press in their own half.

Meanwhile, Michael Cox, in his tactical analysis for the Guardian, felt the failure of either manager to grab control inspired the frantic contest:

It was breathless stuff and among all the talk of coaching philosophies this game was partly brilliant as it felt as if neither manager could control the utterly frenetic contest taking place in front of them.

Despite being an engrossing match in which Liverpool turned in an impressive collective performance, the watching media offered mixed views on the Reds’ overall display.

Richard Jolly, writing for the National, assessed how the Reds thrived due to being able to play as underdogs:

There is something in the psyche of Jurgen Klopp’s team that means they are at their best when they can imagine themselves underdogs.

Liverpool played the game on their terms, City joined in the excitement.

Writing for Goal.com, Melissa Reddy praised Liverpool’s collective performance, especially with it coming despite Philippe Coutinho being way off form:

The visitors had a few man-of-the-match candidates and it is hugely positive that even when Philippe Coutinho is off-colour in such a high-stake game, Liverpool are still able to pack quite the punch.

The Guardian’s Daniel Taylor felt the Reds looked like the more complete outfit:

Liverpool certainly rode their luck at times but there were also periods when they looked the more rounded side in terms of getting the balance right between defence and attack.

However, David Usher, for ESPN, was frustrated by the Reds’ failure to kill the game off:

Having taken the lead there was a real opportunity for Liverpool to kill the game as the home side wobbled but, despite numerous opportunities on the break, the away side were not sufficiently clinical or composed. A shame, then, that he was left exposed time and again by Liverpool on the left, and City knew it, too. Eventually it paid off for them when Aguero equalised from Kevin De Bruyne’s cross from Milner’s flank.

Milner won’t complain, it’s not his way, but Klopp must ensure that he is not left in the lurch by his team-mates at left-back again.

Interestingly, ESPN’s Mark Ogden felt the Reds lacked energy in the closing stages once again, which presents a problem as the Reds battle for a top-four finish:

The question to which Klopp must find an answer is why his players, having benefited from such a light workload this season due to their lack of European football, are struggling through the final stages of games with two months of the season yet to be played.

Against City, his players clocked up more miles than in any other league game this season, a statistic that would suggest that they are still going strong. But the reality is that Liverpool are starting strongly and putting opponents on the back foot with their intensity and high-pressing, but then paying the price in the final moments.

Ogden also suggested Klopp may have to rethink his approach in a league that doesn’t have a winter break:

Klopp’s style of play asks a lot of his players but it is a high-risk strategy, particularly in the Premier League, which continues to plough on without the mid-winter break to which he was accustomed while managing in Germany.

He is set to take his non-international players on a sunshine break during the next fortnight in an effort to re-energise tired minds and bodies, but has the damage already been done with the energy already spent this season?

Firstly, the Express’ Gideon Brooks believes the Reds will be the happier side to have taken a point:

When the dust settles, Liverpool will be the happier of the two sides with the draw which completes an impressive 10-game unbeaten record against the other top-six clubs – five wins, five draws and 20 points.

The BBC’s Phil McNulty felt the stalemate benefited Man United the most:

City remain a point ahead of Liverpool in third with a game in hand as Klopp’s side lay fourth – while the result suited Manchester United best of all as they are now four points behind the Merseysiders with two games in hand after their win at Middlesbrough.

Despite the Reds’ big-game results, the Liverpool Echo’s James Pearce believes the success of the season will hinge on how Liverpool fare with weaker opponents:

However, this campaign will ultimately be defined by their ability to deal with inferior opposition who don’t go toe to toe with them like City did.

After a fascinating contest littered with impressive individual displays, reporters offered views on who shone at the Etihad Stadium, with deserved praise for Emre Can but criticism coming for Philippe Coutinho.

He has shown signs of coming into form recently and this was his best display of the season by some distance. Powerful, composed, determined and purposeful, Can was easily the best midfield player on the pitch and played the pass from which Roberto Firmino won the penalty.

Emre Can prefers the deep-midfield role but sometimes there is an indiscipline to his game. Not this time. This was probably his most accomplished performance of the season.

Reddy reserved praise for Can and midfield partner Gini Wijnaldum:

Emre Can – proving to the club just how valuable he can be as his contract situation is put on ice – was particularly outstanding along with Gini Wijnaldum.

Meanwhile, the Independent’s Luke Brown feels Coutinho should now be dropped after another anonymous performance:

With the club battling so hard to cement a place in the top four, they cannot afford to be carrying any passengers at this pivotal stage of the season. Klopp has to drop his playmaker.

Klopp should gamble. Drop Coutinho for the crucial Merseyside derby after the international break and possibly even for the two or three games that follow it. That gives Coutinho time to rest and get himself up to full fitness before the blood and thunder of the league run-in.

Finally, Bascombe gave Lallana man of the match despite his crucial miss:

It has to be Adam Lallana despite his miss. He must have broken records for distance covered, tackling and creating. Had he struck the winner it would have been one of the great performances of the season.