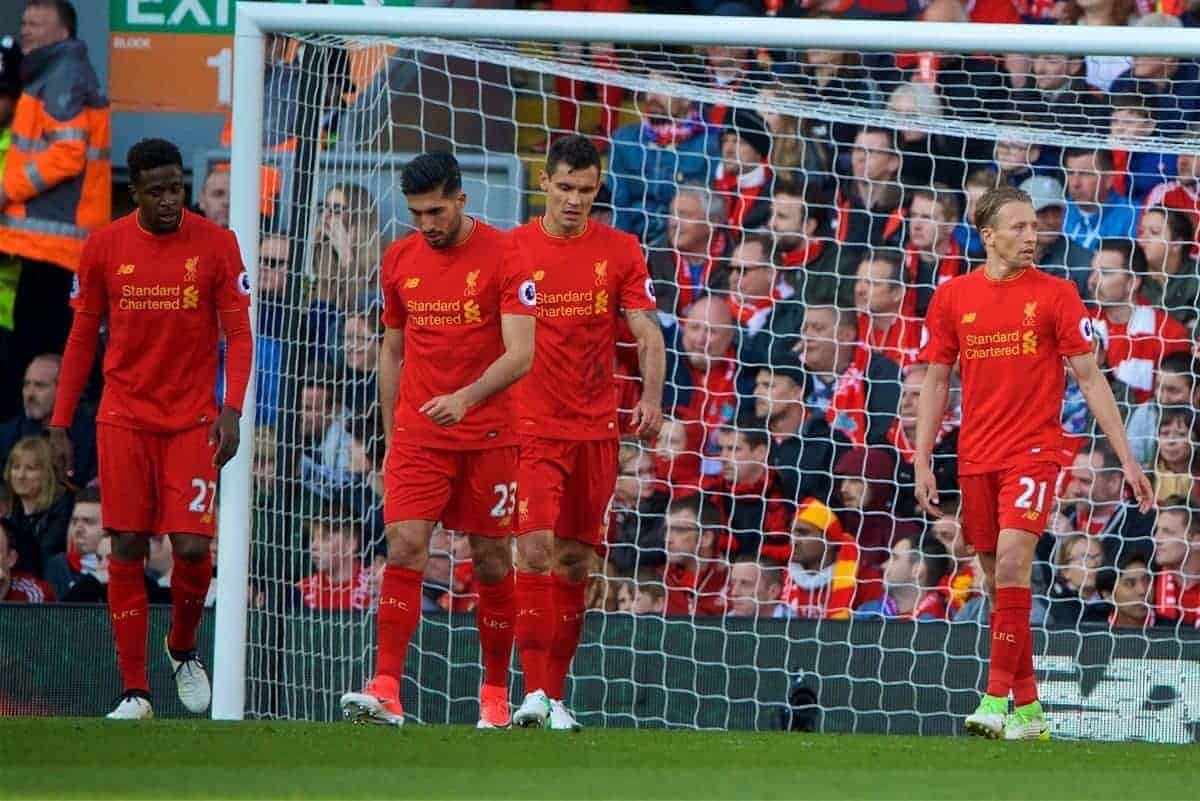 Liverpool saw their first-half lead slip as they fell to a 2-1 defeat at home to Crystal Palace on Sunday, leaving the Anfield crowd stunned.

Taking on a Palace side battling to avoid relegation, it was always going to be a difficult afternoon for Jurgen Klopp‘s Reds.

But after Philippe Coutinho broke the deadlock with an excellent free-kick, it was hugely disappointing to let the points go as Christian Benteke’s brace struck his old club.

With just four games left to play before the end of the season, and with Man United producing a 2-0 win away to Burnley earlier on Sunday, this was a frustrating result in the Reds’ top-four pursuit.

Here’s how supporters reacted to Liverpool’s 2-1 loss at home to Palace on social media.

For those who don't know who Rhian Brewster is make sure you remember the name. A real talent from the LFC Academy

Coutinho wowed Anfield with his opener…

Been a while since I've seen a great free-kick goal by #LFC. What a lovely one by Coutinho.

There I was about to moan about Coutinho shooting too much. What a footballer!

A fit, confident & in form Phil Coutinho is an absolute joy to watch. #LFC.

If that was Benteke in a red shirt no doubt it would have ended up in the Kop. #LFC.

And Sakho’s celebration came under debate…

Benteke. Sold. Scoring the goal. Not celebrating. Sakho. On loan. Not involved. Gets the party started. Idiot. Sooner he's out the better.

btw, if anyone thought there might yet be a way back for Sakho, I think that celebration brought the realisation that he'll be gone

Lovren was berated as Benteke headed Palace in front…

Probably the easiest chance Benteke has had since he last trained with Liverpool.

Lovren all over the place at the back.. involved in both goals conceded.. 2-1 Palace..

Dejan Lovren must see he's facing Crystal Palace and have some sort of existentialist crisis.

Well it's been a real 1/10 game from Dejan Lovren here. Baffling to think he's about to sign a new long-term contract.

And supporters were left to rue a pivotal defeat…

4 wins needed now. Worry is we've watched that performance on loop. Southampton will be yet another re-run. Guaranteed.

Where was the second half siege? Any shots on target? Any near misses? Nah. Just a leaderless team that doesn't know how to defend.

Two very preventable goals, in part due to two poor errors from Lovren, and a likely penalty not given due to a player's honesty. Horrible.

Lovren was dreadful. He's tended to do better against the tall teams, but today he was like vs West Ham last season, all at sea on left

No excuses, #Klopp has to recruit better defenders in the summer, and replace #Lovren for starters. #LFC

Players looked like they didn't know what shape they were playing at the end. Not sure changes helped in any way

The more basic your game plan, the bigger your chance of getting something at Anfield. It's been the same enigma forever. #LFC.

Poor game. No tempo. Not much created. Palace defended well as a team. Benteke 2 goals. Big step back this regarding top 4

Full time, same old story for #LFC. Well done to #CPFC, deserved the points, had a game plan and stuck to it.