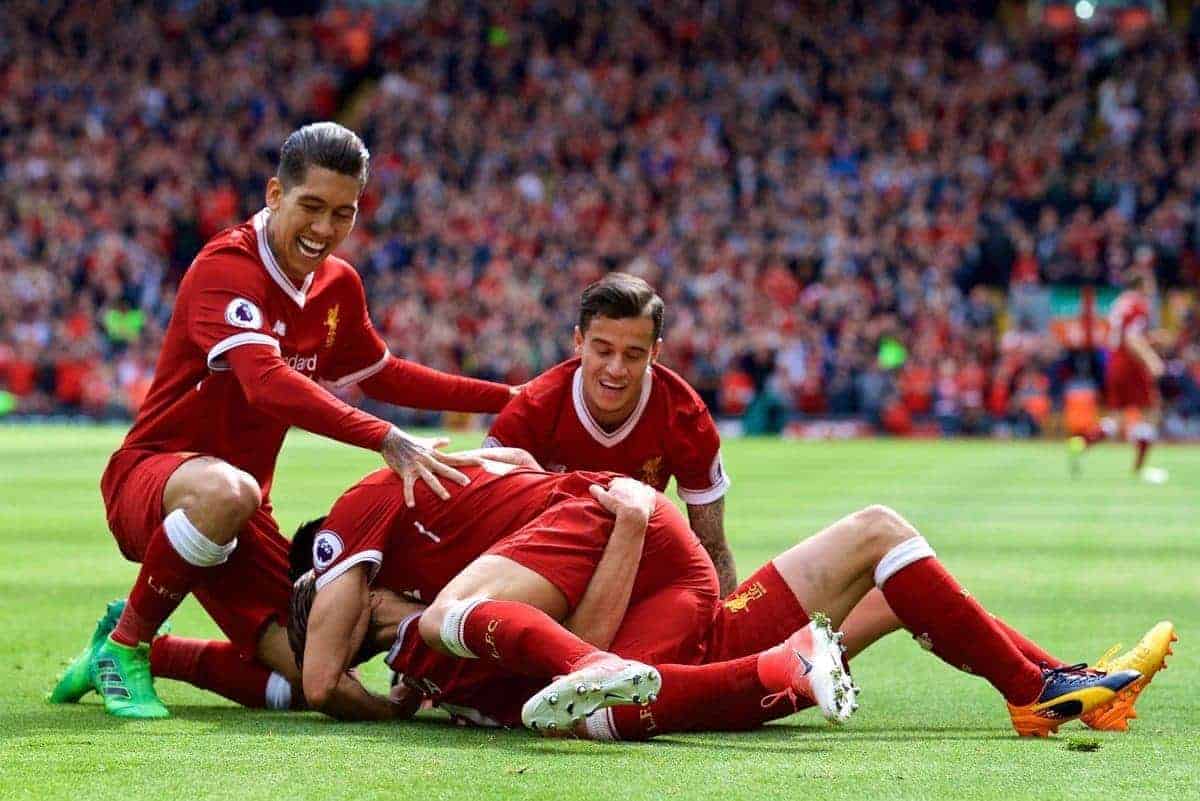 Liverpool were able to achieve a top four finish on the final day, despite a nervy start and wins elsewhere for Arsenal and Man City.

It was a nervy start for the Reds who troubled to break through the defensive wall Middlesbrough built in front of the Kop.

They were limited to shots from outside the area as no player could find a way to breach the opposition back line, either by passing through them or dribbling around them.

On the occasions they did manage to break, the play was sluggish and littered with poor decisions. Both Emre Can and Georginio Wijnaldum squandered good counter-attacking chances by choosing the wrong option when given space.

But all of this changed in one moment in first half injury time, when Wijnaldum was able to break the deadlock.

From then on Liverpool looked freer and were able to add to their lead as a result. Adam Lallana‘s third goal summed up their new assertiveness.

As the game approached the end Klopp was able to use his subs as he saw fit, giving a substitute appearance to Lucas, who was urged to shoot every time he received the ball, and to Alberto Moreno who’s likely to leave the club in the summer.

The atmosphere went from that of a tense cup final, to something of an end of season friendly.

Another Big Anfield Goal From Wijnaldum With goals this season against Man City, Chelsea, and Arsenal, the Dutchman is used to finding the net on big occasions at Anfield.

This one may not have been against a big team, but it was undoubtedly one of the biggest moments of the season.

With Man City and Arsenal cruising in their respective games and the Reds struggling to put anything together for 45-minutes against Boro, the tension was rising in Anfield on the pitch and in the stands.

A rare forward pass from Clyne found Firmino whose lay-off to Wijnaldum fell just behind him, but the No 5 was able to catch the ball with his left foot to set himself perfectly for a shot.

He blasted past Brad Guzan’s at the near post in front of the Kop, lifting the fans from their seats in celebration, and lifting the tension around the place before the half time break.

If the team had gone in at half time at 0-0 and found out the scores in the other games, the tension would have been even higher in the second period.

As it was Wijnaldum’s goal made Jurgen Klopp‘s team talk a lot easier, and relieved the pressure for the rest of the game.

Coutinho’s free kick rounded off a personal best season in terms of goals and assists in typically impressive fashion.

He had threatened the opposition goal with a couple of efforts in the first half, but as he shaped up to take this free kick in the second, you got the impression he was about to find the net.

As with many of his goals, it was dispatched with supreme technical prowess which almost makes it look easy.

It took him to 13 goals in the league this season, and o top of this he matched his 2013/14 assists tally with seven.

Barcelona will be lurking in the summer, but with the Champions League qualification in the bag and an increasingly elevated status at Anfield, he’s no reason to leave this year.

With the score at 0-0 Dejan Lovren put in a challenge which, on another day, could easily have resulted in the referee awarding a penalty.

The initial contact may have been outside the box, but the challenge was clumsy and dangerous at a vital time in the game and the season as a whole.

It further illustrates the need for reinforcements in this area of the pitch if the club are to challenge at the top of the table next season, and also if they’re to give a good showing in the Champions League.

Middlesbrough has a couple of chances in the second half, and you never felt entirely comfortable that the aerial threat of Rudy Gestede would be dealt with.

It’s no wonder left centre back is a top priority this summer, and Liverpool look to win the race for Southampton centre-back Virgil Van Dijk.

This is a huge result for Liverpool in many ways.

It’s not just the chance to play in next year’s Champions League play-off, but it’s a win which means the club will not be left behind by its rivals.

Throughout the season the question has been which two of the big six will miss out on the top four.

But if Manchester United win the Europa League, only one of these teams will miss out on a Champions League place.

If the club to miss out were Liverpool, whose Champions League campaigns have been few and far between in recent years, it would have made the battle to sign top players this summer all the more difficult.

As it is, it’s Arsenal who miss out for the first time in 19 seasons and will have a task on their hands to sign the quality they need to get back to this level next year.