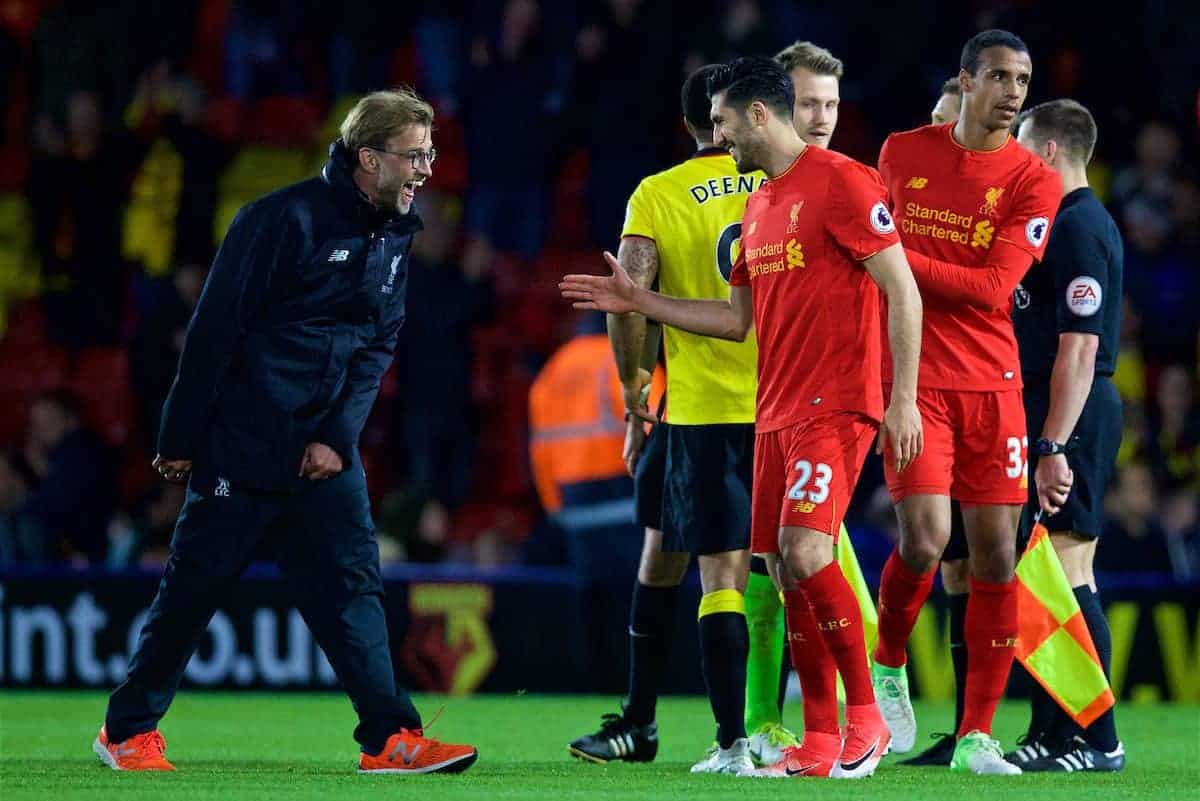 Liverpool produced a mature performance away from home, as they grabbed a 1-0 win at Watford‘s Vicarage Road thanks to Emre Can‘s wondergoal..

A single, sensational goal from Can secured a crucial victory for the Reds, on a night where anything less than three points would have been a huge failure.

As they continue their top-four challenge, a win in Hertfordshire has put Jurgen Klopp‘s side in a great position with just three games left to play—with their performance hugely encouraging.

Here are five talking points from Liverpool’s 1-0 win away to Watford.

Can Takes Responsibility at Key Stage

It was shaping up to be a frustrating season for Can, with injury problems and increased competition hampering his progress in the middle of the park.

But since overcoming a nagging calf injury, the Germany international has been in excellent form.

At Vicarage Road it was no different, with Can taking responsibility in midfield, snapping in challenges, making him constantly available and performing with a welcome sharpness.

His goal was, naturally, the icing on the cake, but it was a truly mature performance from the 23-year-old.

Liverpool need leaders like Can during this crucial run-in, with his display against the Hornets far from a one-off—even if the bicycle kick proves to be. There is considerable speculation surrounding Lucas’ future at Liverpool heading into the summer, with Galatasaray believed to have revived their interest.

Klopp has kept faith in the veteran with Jordan Henderson out injured, and he has been rewarded with a departure from the norm for Lucas.

In his last five games, Lucas has tallied three assists, matching his creative output for his previous 163 appearances for the Reds in the Premier League.

His pass from Can’s wondergoal was of the highest quality, lofted up perfectly for the German to power home, and it was characteristic of a more adventurous approach from the No. 21.

If Lucas is setting out to convince Klopp he has more strings to his bow, he is certainly going the right way about it.

Matip and Lovren Hold on in Testing Atmosphere

There was heavy scrutiny on Liverpool’s centre-back pairing in the buildup to Monday’s clash with neither Joel Matip or Dejan Lovren showering themselves in glory in the 2-1 loss to Crystal Palace.

Lining up against a formidable physical presence in Troy Deeney, the Reds duo had their work cut out for them, but despite a considerable test against Watford, they held out impressively.

No player won more aerial duels than Lovren (seven), while none made more clearances than Matip (eight), as they took a simple approach at the back.

On a difficult evening against the Hornets, the centre-back duo prevailed, keeping it simple and holding out for another clean sheet.

Liverpool’s season has been dogged by regular injury issues, and it was fitting of their battle that just as Adam Lallana made his return, Philippe Coutinho was forced off the field with a dead leg.

The sight of the Reds’ Little Magician limping around before trudging off with 77 minutes left to play was a worrying one, though he has since provided an optimistic diagnosis.

Fortunately, Lallana’s comeback, replacing Coutinho as an early substitute, saw the England international pick up where he left off with his movement and guile giving the away side an attacking sheen.

And thankfully, Coutinho posted on social media post-match that “It isn’t serious” which is a huge relief ahead of the final three games of the season.

Being able to partner Coutinho and Lallana again should be a key factor behind Liverpool’s top-four push.

With both Man City and Man United held to draws at the weekend, all the pressure was on Klopp’s side to come up with the goods on Monday night.

And though they made it difficult for themselves, holding on for a 1-0 win has given them a real advantage in the race for a place in next season’s Champions League.

Liverpool though are simply three wins from being in next season’s Champions League.

That is, of course, easier said than done, with Southampton (H), West Ham (A) and Middlesbrough (H) left to play.

But this win has put the Reds’ fate back in their own hands, no longer dependent on results from elsewhere in the north-west.