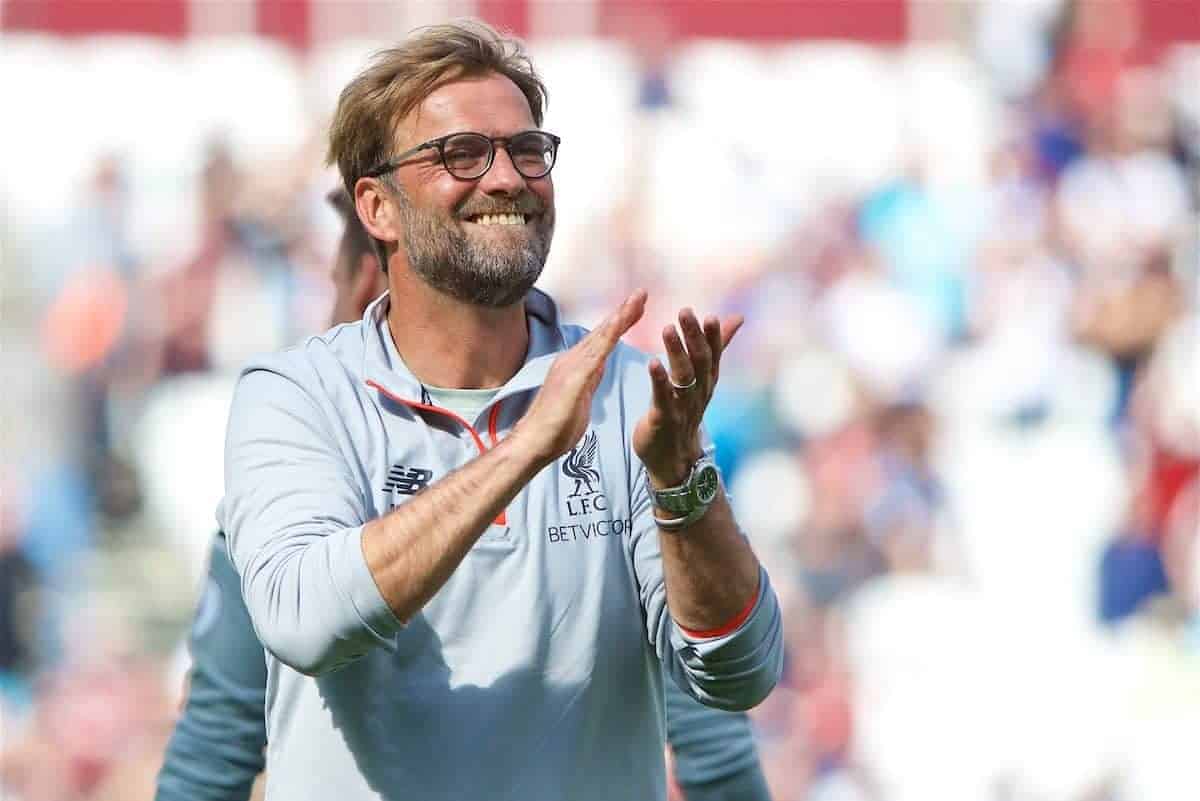 Jurgen Klopp enjoyed the “perfect afternoon” as Liverpool kept their Champions League destiny in their own hands by destroying West Ham at the London Stadium.

Philippe Coutinho scored twice after setting up the returning Daniel Sturridge for the opener, and Divock Origi put the seal on a thumping 4-0 victory.

Liverpool travelled to the capital knowing any slip-up could let Arsenal take the initiative in the race for a top-four finish, and faced a West Ham team who had dashed Tottenham‘s even loftier ambitions just nine days earlier.

But an emphatic win ensured that victory over relegated Middlesbrough on the final day will take the Reds back to Europe’s elite next season.

“It was hard work, and there were a few moments where the game could have changed, but we played really good and we were deserved winners,” said Anfield boss Klopp.

“The boys did brilliantly, we scored the goals and could have scored more. So yes, a perfect afternoon.”

The breakthrough arrived in the 35th minute when Coutinho’s exquisite through-ball, from inside his own half, exposed a gap the size of the nearby Blackwall Tunnel in West Ham‘s defence.

With Jose Fonte playing him onside, Sturridge was able to race towards goal before rounding Adrian and tucking in his first goal since January.

Yet Liverpool had an extraordinary let-off on the stroke of half-time thanks to an astonishing double miss from Andre Ayew.

The £20million forward prodded Manuel Lanzini’s corner onto the far post from two yards out, and, as the ball rebounded to him, he hit the same upright again. West Ham promptly caved in and Coutinho twice weaved his way through what was by now masquerading as their defence to make it 3-0 before Origi tapped in a late fourth.

“They had chances to score but they couldn’t score,” added Klopp. “They had one of the biggest chances I ever saw in my life and didn’t score it.

“Now we have one more game and we will stay focused, 100 per cent. We know the situation and no one will underestimate the next game.”

It was not the way West Ham wanted to end what has been a turbulent first season as tenants of the former Olympic Stadium.

A five-match unbeaten run came unceremoniously to an end and a ‘lap of appreciation’ by the players after the match was conducted in front of virtually empty stands.

“I am very disappointed the way we played,” said manager Slaven Bilic. “We wanted to put in the same performance as against Spurs but it wasn’t to be.

“We have to be honest about it. We wanted to avoid that factor of complacency but obviously it was there, at least subconsciously.

“We were nowhere near close enough to them when they had the ball and when you give players like that space they will kill you.

“We could have scored the first goal, and we should have equalised but that, on top of the performance, meant it ended like that.”