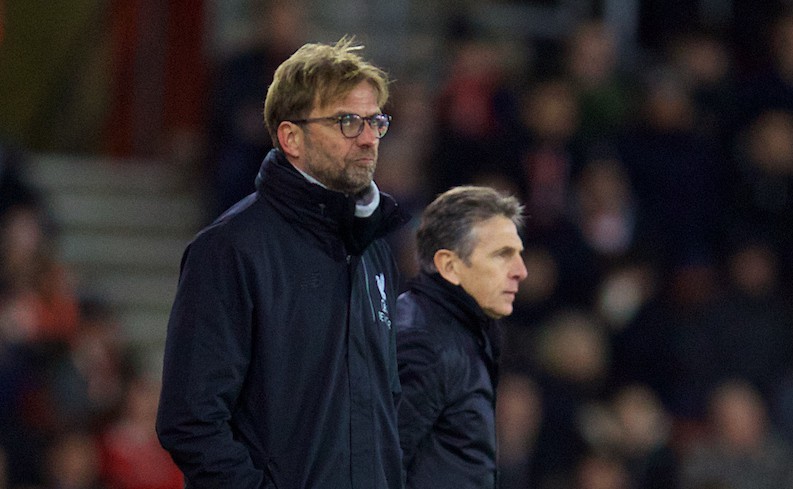 Southampton have heaped misery on Liverpool a number of times recently, and beating them on Sunday would be another major challenge seen off.

A couple of weeks ago, I wrote about the mental barrier that would be overcome if the Reds could beat Crystal Palace.

The Eagles have had plenty of success over Liverpool, but many things pointed toward Jurgen Klopp‘s men prevailing at Anfield and cementing their place in the top-four.

We all know what happened next, as Palace picked up a 2-1 win, and we were left witnessing the away end once again basking in the joys of winning at Anfield for the third season running.

Having seen off Watford on Monday, thanks mainly to Emre Can producing the kind of acrobats Jackie Chan would be proud of, attention is now very much on this weekend’s visit of Southampton.

While Liverpool have enjoyed some memorable wins of their own against Saints, most notably the 6-1 League Cup win at St Mary’s last season, their opponents have had a hoodoo over us that must end. You think that because the Reds have seemingly signed about 47 players from Southampton in the last four years, we would be the ones having a laugh at their expense.

It has been quite the opposite a number of times, however, and you wonder if the frustration at Liverpool constantly buying their best players acts as an incentive for them.

Reds supporters would be no different at the end of the day, if star men were joining the same team every summer.

Saints fans certainly seem to act in that way, with a dreadful repertoire of songs aimed at the travelling Reds earlier this season, and Dejan Lovren invariably booed for the entire 90 minutes.

That aforementioned League Cup mauling is the only time Liverpool have prevailed in their last six clashes with Southampton, which sums up their recent (lack of) success in the fixture.

The 0-0 draw at St Mary’s in November was not a terrible result, by any means, but it did halt three wins on the bounce for Klopp’s men and took some momentum out of their title challenge.

There was also the two-legged League Cup semi-final back in January, with the south coast outfit winning 1-0 home and away and effectively doing a job on Liverpool.

That’s 270 minutes played against Southampton this season without scoring.

Claude Puel’s defended superbly, stifling the Reds time and time again, and were more than worthy of progressing. It was another chance of a trophy gone for the Reds, and their conquerors then made matters worse by losing to Man United in the final at Wembley. They probably even did that out of spite!

Southampton‘s 3-2 win last season was one of the bleakest results of Liverpool’s up-and-down season, and a low point in Klopp’s superb reign to date.

Leading 2-0 at half-time and seemingly cruising, Sadio Mane inspired the hosts to victory with a double against his future employers, and Martin Skrtel defended so badly it may as well have been Martin Kemp at centre-back.

Mane also popped up with a late equaliser the previous October, robbing Klopp of his first win as manager, while Lovren scored the winner at Anfield in 2013/14, prior to his move there less than a year later.

Peter Crouch, yet another who switched from one club to the other, scored in a 2-0 win in 2005, while John Arne Riise’s own goal was a horrible moment back in the title-chasing 2001/02 campaign.

The 3-3 draw at The Dell in 2000, having led 3-0, was another occasion to forget, and they were left licking their wounds on numerous occasions throughout the 1990s.

Sunday is a day to stop the rot, as Puel’s inconsistent outfit make the trip to Merseyside.

There For The Taking?

Tempting fate is always a very dangerous thing to do, but Liverpool go into this weekend’s contest as firm favourites.

They have so much riding on these last three league matches, with Champions League qualification vital to their chances of success in the coming years.

Performances at Anfield have been shaky of late, with Palace winning, Bournemouth getting a point and Burnley unfortunate to lose.

On top of that, Southampton‘s season appears to be petering out, with no wins in their last three attempts, albeit including games against Chelsea and Man United, and very little to play for in mid-table.

Only West Brom have a worse record in that time, and their supporters are rumoured to be growing a little restless with the surly Puel. The Reds are looking for their first goal against their opponents in their fourth meeting this season – that drought simply must end.

Saints are a good side on their day, however, with players who can hurt you, so anything than a good display would not be appreciated by the masses.

Many mental barriers have been hurdled this season, with ugly away wins starting to come thick and fast for once, but individual teams continue to be bogey sides for Liverpool.

The Palace curse still hasn’t been overcome but their Saints struggles have to end on Sunday. Dropped points would make for a horrible nervy last two games.