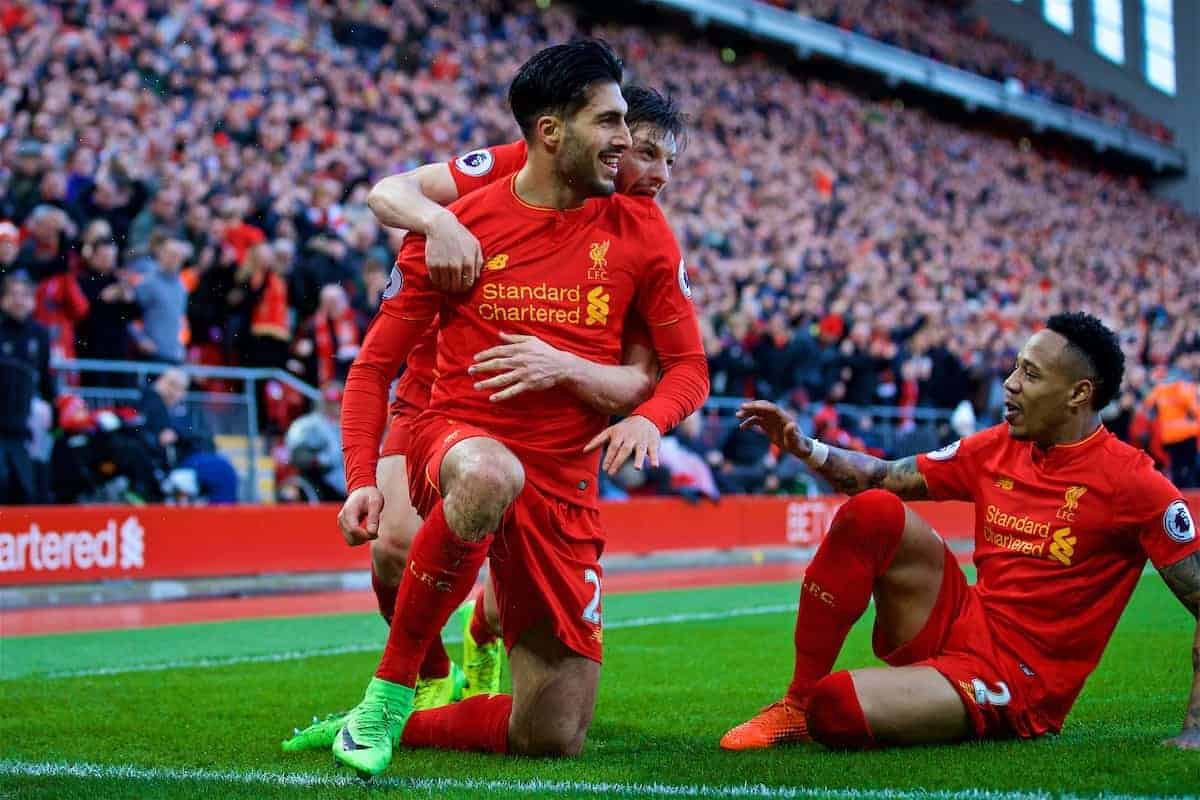 Emre Can‘s recent performances have reminded the doubters of his vast potential, and Liverpool must tie him down to a new deal pronto.

It wasn’t long ago that Can was being vilified left, right and centre for his performances, with many hoping to see him leave Liverpool this summer.

The 23-year-old’s form was undoubtedly poor, especially compared to the highs of this stage last season, but writing a player off so quickly was a reckless thought process. Will we ever learn?

All of a sudden, Can looks one of Liverpool’s key players again, with his latest outing at Watford his most significant contribution of 2016/17 to date.

His outrageous strike, which has to win both the Reds’ and Premier League‘s Goal of the Season award, sealed three invaluable points for Jurgen Klopp‘s side.

It was another 90 minutes that outlined why contract talks with Can’s representatives must go smoothly in the coming weeks, with the German really proving his worth.

The way in which Can has stood tall while plenty around him have started to flag has been admirable, and it has outlined the mental fortitude at his disposal.

Like many Reds, he was dire in the 3-1 loss at Leicester City in late February, but since then, he has been a dominant figure in the Liverpool midfield.

Can has looked far more mobile than he did earlier in the campaign—he was being hampered by injury, in fairness—and his overall influence has gone up a huge notch.

Whether it be his marauding runs through the middle, superb work rate or blossoming leadership skills, the youngster has had an aura about him, especially away to potentially tricky opponents.

His winning goals against Burnley and Watford have also been crucial in Liverpool’s slightly laboured run-in, proving he can come up trumps at key moments.

It is also worth noting that Can has now chipped in with five goals this season—the best tally of his career so far, which is promising.

Those impatient calls for him to be disposed of at the end of the season now feel a long way off, and Liverpool must ensure one of their prized assets remains on Merseyside.

Can’s Liverpool future has been up in the air for a while now. His representatives have appeared hesitant to sign a new contract, with the terms of the deal failing to be agreed upon.

The general consensus was that the former Bayer Leverkusen man was not doing enough to merit being one of the top earners at Anfield, but the club’s stance should be different now.

Given his potential and the fact he has shone so brightly during a vital part of the season, he deserves to be paid handsomely.

He has said in the past that money is far from the most important thing, but Liverpool must give him what he wants, or risk losing him to a European powerhouse.

Can also reportedly had concerns about a lack of game time moving forward, with Jordan Henderson, Georginio Wijnaldum and Adam Lallana Klopp’s first-choice trio in midfield, when fit.

He is doing his utmost to change that, and there is a strong argument to say he now justifies being considered a key player.

It is very easy to forget how important Henderson was to the team before injuries yet again ruined his season, but therein lies the problem.

The Liverpool skipper cannot be relied upon to be a pivotal figure in the midfield week in, week out, whereas Can’s fitness levels are invariably good.

Equally, Wijnaldum has gone missing away from home on occasions, and while the Dutchman has enjoyed a very good debut season, he should not necessarily be an automatic pick.

Can is a footballer who can look all over the place when out of form, with his all-action style often coming across as messy and frantic.

His poor form prior to the last few months should not be excused, even if he wasn’t 100 percent fit, and he is at an age where he must start delivering more consistently.

Despite huge criticism coming his way, Can has really taken the bull by the horns of late, and his box-to-box brilliance has helped drive the Reds on to a likely top-four finish.

He has everything in his locker to become a genuinely formidable footballer in the next few years, and Liverpool need to be keeping hold of players of his calibre.

Can is still learning, and there will be speed-bumps in his progress, but as Klopp looks to tie players down to new deals, his compatriot must be at the forefront of his thinking.

Dejan Lovren has already signed on, causing quite the stir in the process, and Can should be next in line to extend the deal that expires next year.

It can be argued that the Reds have already left it too late, with Lovren’s £100,000-a-week wage and their likely Champions League qualification setting a precedent for discussions.

When those dark months of January and February ended for Liverpool, not many would have predicted Can featuring much, let alone being Liverpool’s star man of the spring.

That is exactly what has happened, though, and we have suddenly remembered what an excellent player the club have in their ranks.

The Germany international’s moment of magic against Watford has earned him admiration from all corners of the footballing community, and it is likely to aid him in his quest to become one of Liverpool’s big earners.