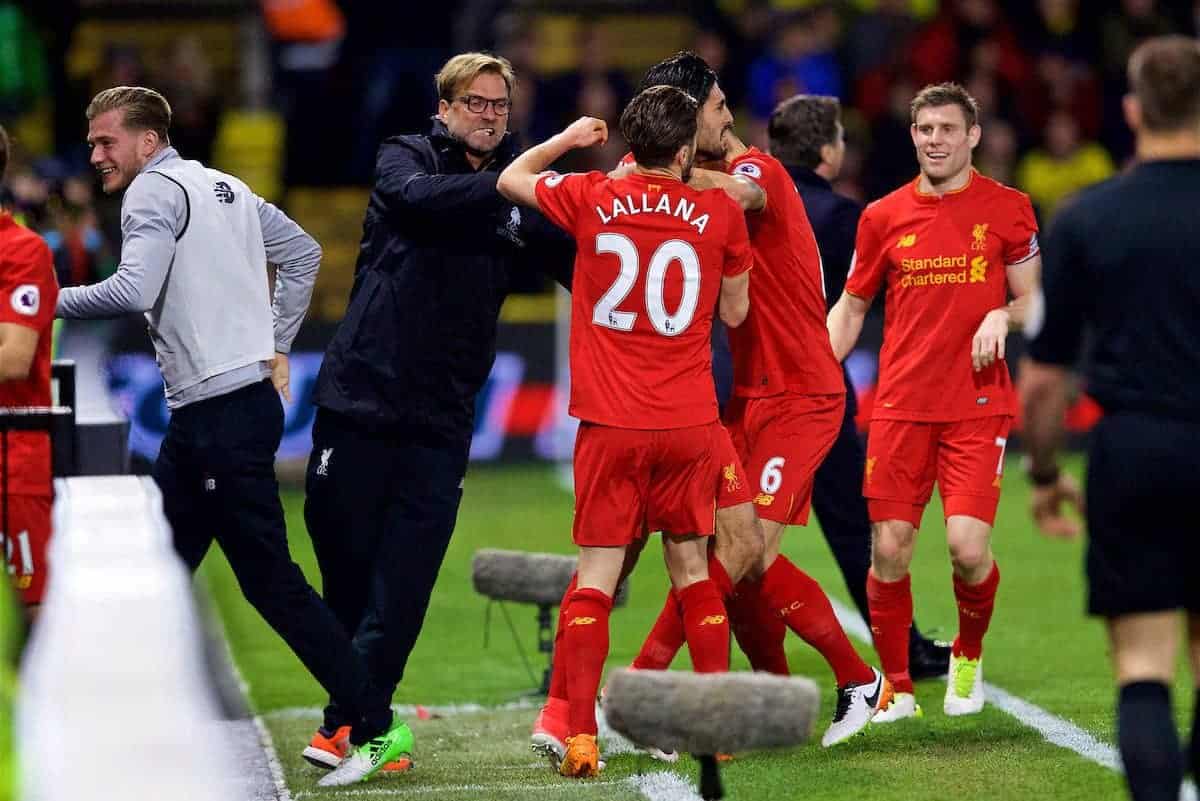 Emre Can scored an incredible winner to give Liverpool a 1-0 victory at Watford on Monday night, giving the Reds the top-four advantage.

The Reds travelled to Hertfordshire buoyed by an excellent set of results for them elsewhere in the Premier League, with Man City and Man United both held to draws on Sunday.

Jurgen Klopp‘s side were lifted by the return of both Adam Lallana and Daniel Sturridge, too, though the German opted to make no changes to the side that lost 2-1 to Crystal Palace last time out.

Watford were looking to end the season strong, as they continue their evolution under Walter Mazzarri, ensuring Monday’s clash would be far from straightforward for the Reds.

Victory at Vicarage Road was imperative, and a moment of true quality made sure that was the case.

Liverpool were dealt a blow in the opening stages, as Philippe Coutinho went down under a robust challenge, with the Brazilian forced off with a thigh injury.

Lallana took his place, making his first appearance after picking up a similar issue on England duty, entering a tense atmosphere that saw Can go closest with a powerful, left-footed drive.

The substitute’s quick feet and movement did allow the Reds to gain more of a foothold, but Watford still held firm, with Liverpool struggling to create any meaningful openings.

Lallana almost broke the deadlock in sensational fashion with five minutes left to play in the first half, but the midfielder’s dipping, long-range volley crashed against the crossbar.

Can went one better just before the interval, however, with the German sending an overhead scissor kick into the top corner on the charge, powering home Lucas Leiva‘s deft chip.

Boosted by that late opener, the Reds emerged for the second half an improved outfit, looking to add a second to their tally and secure a priceless victory.

One of the most improved players after the break was Divock Origi, performing with more vibrancy and urgency, and the Belgian went close to adding Liverpool’s second, but was thwarted by Heurelho Gomes.

The Reds continued to hold onto their lead as Watford looked to threaten Simon Mignolet, with referee Craig Pawson certainly aiding their cause with a series of questionable decisions.

Klopp sensed the need for fresh legs as the game entered its closing stages, sending on Sturridge for Origi, hoping to stretch the game with the striker’s movement, while Ragnar Klavan replaced Lallana.

It was far from the most comfortable of evenings, but these two substitutions gave the away side more of a backbone as they held on for a significant win.