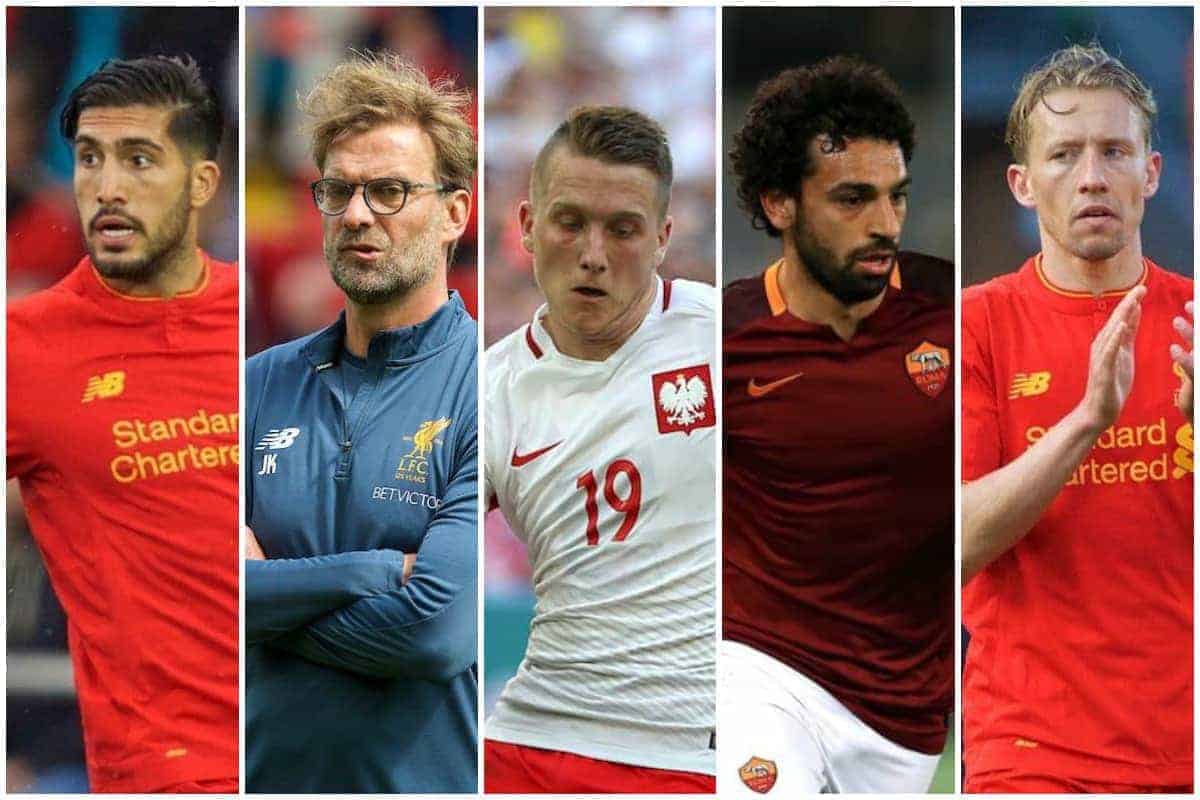 We round up the latest Liverpool FC transfer rumours, including a rumoured new contract for Emre Can and a renewed bid for Piotr Zielinski.

The Reds have already been busy this summer, agreeing a deal with Chelsea striker Dominic Solanke and seeing a move for Southampton centre-back Virgil van Dijk collapse.

With Jurgen Klopp determined to strengthen his squad ahead of the 2017/18 campaign, this is set to continue over the coming months.

This should see a host of ins and outs on Merseyside, as Klopp shapes his side after a successful campaign last time out.

Here, we take a look at the latest from the rumour mill, with Can believed to be close to a big-money contract extension.

Can Set For New Reds Deal? Can’s future has come under question in 2017, with the Germany midfielder’s current deal with Liverpool set to expire at the end of the upcoming campaign.

The 23-year-old is believed to be seeking assurances over his future, having struggled to break through into the midfield setup in the first half of last season.

But despite overtures from Serie A giants Juventus, Can could be set to commit to the Reds for the long term.

According to the decidedly dubious Tutto Mercato, he is due to pet pen to paper on a new four-year contract worth around £100,000 a week, which would put him in line with recent extensions.

The Reds’ pursuit of a new left-back looked set to focus solely on Fulham teenager Ryan Sessegnon earlier this summer, but their interest has now subsided.

However, Alberto Moreno is set to leave, with La Liga his likely destination, and Klopp will still need to add to his left-back ranks to supplement current first choice James Milner.

Seemingly on Liverpool’s radar is Porto’s upcoming star Rafa Soares, who spent much of last season on loan with Rio Ave in the Portuguese Primeira Liga.

“I know I’ve been followed by English clubs especially after our campaign,” he said this week.

“Liverpool are a great club and to be linked is an enormous honour for me. I’m naturally flattered, but I’m a Porto player and focused on succeeding here.”

The Poland international was widely expected to join Liverpool from Udinese last summer, with the Reds even bidding £12 million for the midfielder at the beginning of July.

He went on to sign for Napoli, however, and shone throughout 2016/17, scoring five goals and assisting seven in 36 games as his side finished third in Serie A.

According to Italian publication Il Mattino, Klopp has prompted a renewed pursuit of the 23-year-old, even suggesting a bid of £25 million has been made.

Whether this is the case remains to be seen, with RB Leipzig’s Naby Keita and Arsenal‘s Alex Oxlade-Chamberlain also options, but Napoli are believed to value Zielinski at closer to £61 million.

One of the names most regularly, and tediously, linked with Liverpool this summer so far is Roma winger Mohamed Salah.

The 25-year-old has already been the subject of a failed £25 million bid from the Reds, with his side looking for upwards of £35 million, and the saga can be expected to continue.

But there may have been a breakthrough, if the presence of Salah’s agent, Ramy Abbas Sissa, in London is significant.

While little can be drawn from Sissa’s trip to the capital, all indications have been that Salah is eager to join the Reds, and this could be the next step in the process. If Can commits his future to Liverpool, Lucas Leiva‘s prospects will be increasingly slim, with the Brazilian midfielder expected to depart ahead of the 2017/18 campaign.

Having already revealed he would be willing to return to former side Gremio if a deal can be brokered, Lucas could have other options in the Premier League.

Brighton & Hove Albion have already been credited with an interest, and according to the Northern Echo, Rafa Benitez’s Newcastle United are also considering a move.

The Magpies are said to have made an enquiry into Lucas’ availability, with the 31-year-old valued at £4 million.