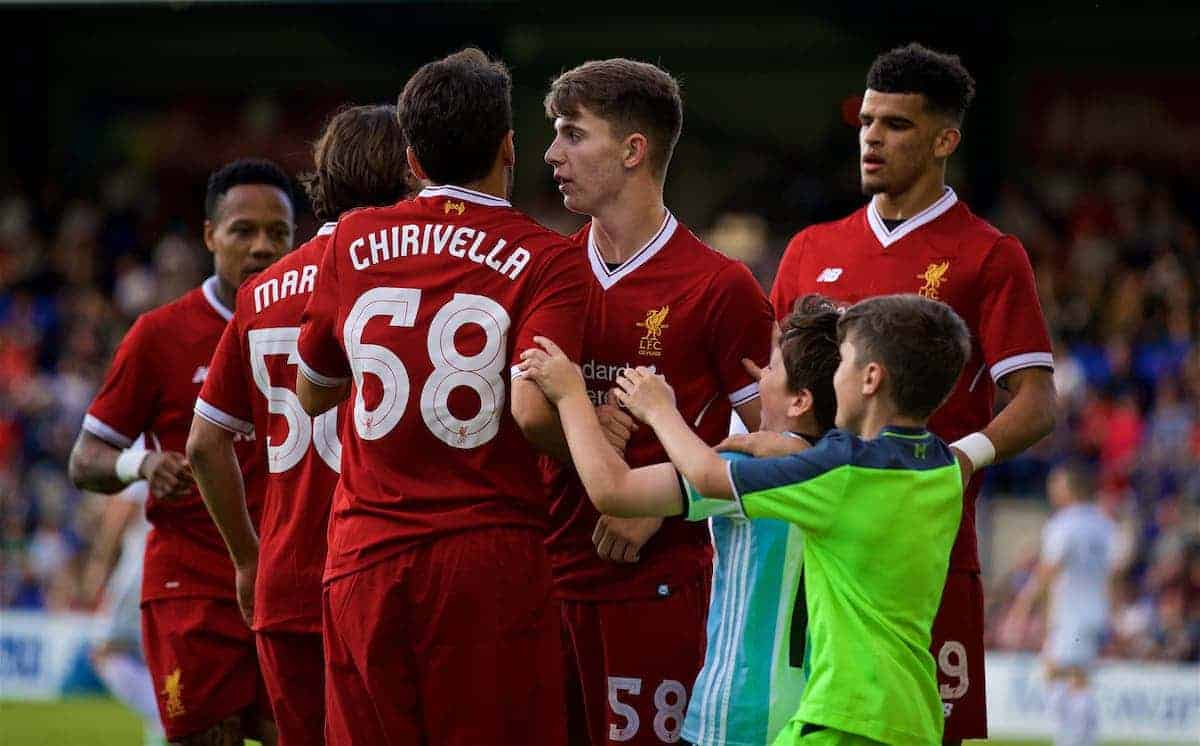 Liverpool sauntered to a 4-0 win in their first pre-season game of 2017/18, barely breaking sweat as they saw off Tranmere Rovers on Wednesday night.

A Game of 2 Halves and 1 System As was the case with this fixture last season, Klopp fielded different teams in each half.

The only difference here was that Loris Karius remained in goal for most of the match, before being replaced by Kamil Grabara with around 25 minutes to go.

But despite the changes in personnel, the formation remained the same as Klopp stuck with the 4-3-3 which was used for the majority of the last campaign.

Two slightly staggered central attacking midfielders played in front of a holding player, while up front the wide players offered a mixture of pace and creativity.

Roberto Firmino offered the first-half guile and Sheyi Ojo the pace. In the second these roles were taken by Ryan Kent and Lazar Markovic respectively.

One noticeable aspect of the team’s play in both halves was the interchanging of positions among the front five. Wingers would find themselves in midfield or in the striker position, and the central players would sometimes fill in out wide.

The full-backs would join the midfield when attacking rather than overlapping every time, and midfielders regularly found their way into the box.

There were encouraging signs that little work is needed on a system which was honed last season, and the players just need to find their fitness and polish their skills before the season starts in a month’s time. The team which was sent out for the first half had a first-team feel to it. The only players who wouldn’t be considered regulars or senior players were Ojo, Trent Alexander-Arnold and Marko Grujic.

All three of them had their moments, with Ojo showing glimpses of the play which had helped England U20s win the World Cup this summer, and Alexander-Arnold still looking like competition for Nathaniel Clyne rather than just backup.

But perhaps the most intriguing performance was that of Grujic.

The Serbian played just 39 league minutes last season, and though he managed a couple of outings in the League Cup, including an assist for Daniel Sturridge against Spurs, Liverpool fans are yet to see what he’s all about.

In this game he was spraying passes about the pitch when he found himself in deeper midfield positions, but he wouldn’t stay there for long.

One shot from outside the area was parried by Tranmere ‘keeper Scott Davies, but this was just a sighter for a long-range blast which would find the back of the net towards the end of the first half.

A New Signing on Show

Liverpool have only signed two players so far this summer, and with Mohamed Salah in Paris finalising his work permit, Solanke was the only new boy on show in Birkenhead.

The 19-year-old was fresh from the U20 World Cup win which Ojo and Ovie Ejaria were also part of, and his recent competitive football showed with his sharpness at Prenton Park.

He cut a considerable figure up front, even when stood next to the Tranmere defenders who looked like they’d enjoyed their off-season a bit too much.

It was his shot which troubled Davies, forcing him to parry into the path of Pedro Chirivella for Liverpool’s third.

He wasn’t involved as much as he would have liked as the game went on, but it was good for fans to see at least one new name on the pitch this pre-season.

They’ll be hoping to see a whole host of others by the end of the month. Two of the Liverpool goals came from the spot, and both were despatched with apparent ease.

Last season’s first-choice penalty taker made no mistake with the first chance: James Milner stepped up after Ojo was taken down by Davies, and sent the ball confidently past the ‘keeper, who had no chance even though he guessed the right way.

The second came late in the game with different personnel on the pitch, but the end result was the same.

Ben Woodburn was felled after good work from Kent, and the Welshman rose from his feet to take the spot-kick. He went with a different technique to Milner, sending the keeper one way and finding the opposite corner.

Given the trickiness of Liverpool’s attacking players, and the speed which will be added to the team by Salah, there’s a good chance they’ll get a few penalties in the coming season.

And finding reliable players to convert them could win the team vital points. Liverpool’s National League opponents offered very little, and Karius only had a couple of saves to make, catching an audacious long-range lob from Ollie Norburn in the first five minutes, and blocking a close-range effort from a tight angle in the second half.

If there were possession statistics for this game, they would probably read at 80-20 in favour of the visitors from across the water.

Klopp’s side were second only to Man City in the possession-hogging stats last season, and given the style on display here it looks like they could challenge Pep Guardiola’s side in that regard in the coming campaign.

Upcoming games against Wigan and then Crystal Palace will provide a gradual step up in quality for the Reds, before they face stronger European sides when they travel to Germany at the end of the month.