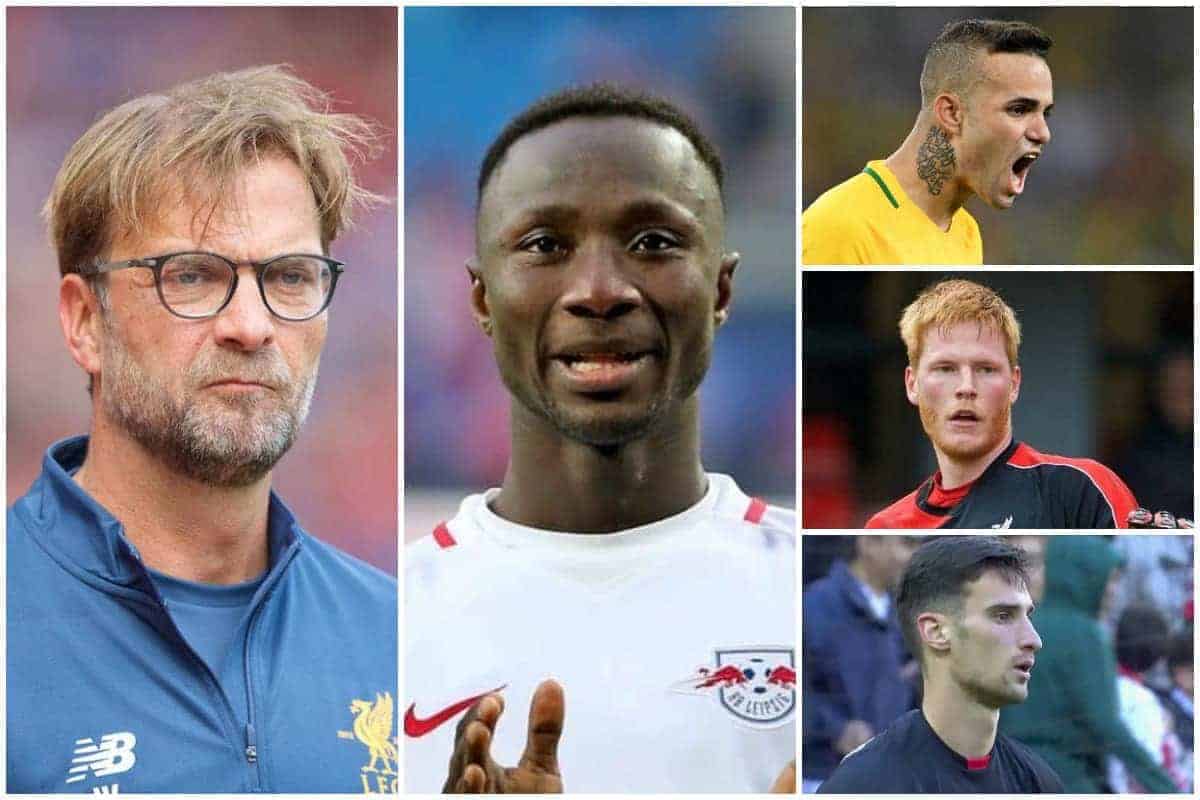 We round up the latest Liverpool transfer news and rumours on a quiet Monday, as the Naby Keita saga rumbles on.

The weekend saw developments in the Reds’ pursuit of both Keita and Alex Oxlade-Chamberlain, with the transfer window officially opening on July 1.

With Jurgen Klopp welcoming his squad back to Melwood for pre-season training on Wednesday, there is likely to be further progress—for better or worse—as the German urges deals over the line.

Here’s the latest from the rumour mill, as Liverpool’s transfer window continues to unfold.

Naby Keita is set for talks with RB Leipzig this week as speculation mounts over a big-money summer move to Merseyside.

The 22-year-old is expected to tell the Bundesliga side of his desire to leave, and Klopp is reportedly eager to secure a deal, regardless of Leipzig’s £70 million valuation.

And taking to Twitter on Monday morning, former Liverpool striker Titi Camara, Keita’s Guinean compatriot, claimed “Naby has his heart set” on joining the Reds, with Leipzig “looking for a replacement.”

Camara even went as far as suggesting Keita has “requested” the No. 8 shirt if he made the switch, describing it as a “lucky number” for the midfielder.

While it would be wrong to take Camara’s word as gospel, Keita does seem to be edging closer to Liverpool.

After the two clubs agreed a £4.5 million deal in June, Andre Wisdom has finally completed his switch from Liverpool to Derby County.

The 24-year-old had spent the past four seasons away on loan, including a successful campaign with the Rams in 2013/14, with Wisdom clearly making an impression at Pride Park.

Following his return to England last week, Wisdom put pen to paper on a long-term deal with Derby and underwent a medical.

And the two clubs have now confirmed Wisdom’s move, with the versatile defender leaving Liverpool after nine years. All the best, Andre! Back in May, Liverpool were claimed to be pursuing 24-year-old Gremio forward Luan, with his club even forced to deny a £26 million deal was in place with the Reds.

The Brazilian is still rumoured to be a long-term target for Klopp, but according to reports in Italy on Monday, Luan could be on his way to Inter Milan instead.

Tuttosport have run with the headline describing Luan as a “a wildcard for [Luciano] Spalletti,” presented by technical director Walter Sabatini.

Speaking to FCInterNews this week, Gremio vice-president Odorico Roman confirmed interest from “England, Spain, France, Italy, Russia and Germany,” so it could be that Luan is on his way to Europe soon.

But given Liverpool already have Roberto Firmino, Daniel Sturridge, Divock Origi, Dominic Solanke and Danny Ings to call upon up front, a move for Luan seems unlikely.

Bogdan Closing in on Forest Move? Last week, Championship side Nottingham Forest were reported to be interested in signing out-of-favour Liverpool goalkeeper Adam Bogdan on loan.

The Hungarian has little chance of battling his way back into contention on Merseyside, having left on loan for Wigan Athletic last summer, before his season was derailed by an ACL injury.

Bogdan has since recovered and returned to training, with the 29-year-old set to return to Melwood on Wednesday to begin pre-season under Klopp.

However, according to Hungarian journalist Tomasz Mortimer, Bogdan is likely to make the move to the County Ground.

Joining Mark Warburton’s side would be a positive move for Bogdan, who conceded just 19 goals in 17 games for Wigan last term. Despite having Simon Mignolet, Loris Karius and Danny Ward on the books, Liverpool have been regularly touted with signing a new goalkeeper over the past year.

The latest to emerge on the rumour mill is Sevilla’s Sergio Rico, who has established himself as first choice in Andalusia over the past two seasons.

According to Seville outlet Orgullo de Nervion, Liverpool are planning to bid around £10.5 million for the 23-year-old, who is contracted to the club until 2019.

However, Rico is said to have a release clause of £26.3 million in his current deal, suggesting the Reds’ rumoured offer would fall on deaf ears at the Ramon Sanchez Pizjuan Stadium.

Whether Klopp needs another goalkeeper is hugely questionable, either way. Liverpool are likely set for another overhaul in their academy ranks this summer, with a host of names already leaving, some to be promoted to the first team and others departing on loan.

One player who currently finds himself at odds at Kirkby is Sam Hart, who endured a hit-and-miss spell with Port Vale last season, before returning to Merseyside in January.

Turning 21 in September, Hart is no closer to sealing a first-team role under Klopp, and according to the Star, is the subject of loan interest from League Two side Grimsby Town.

While it is certainly a dubious source, it would be no surprise to see Hart leave the Reds for another temporary spell this summer.