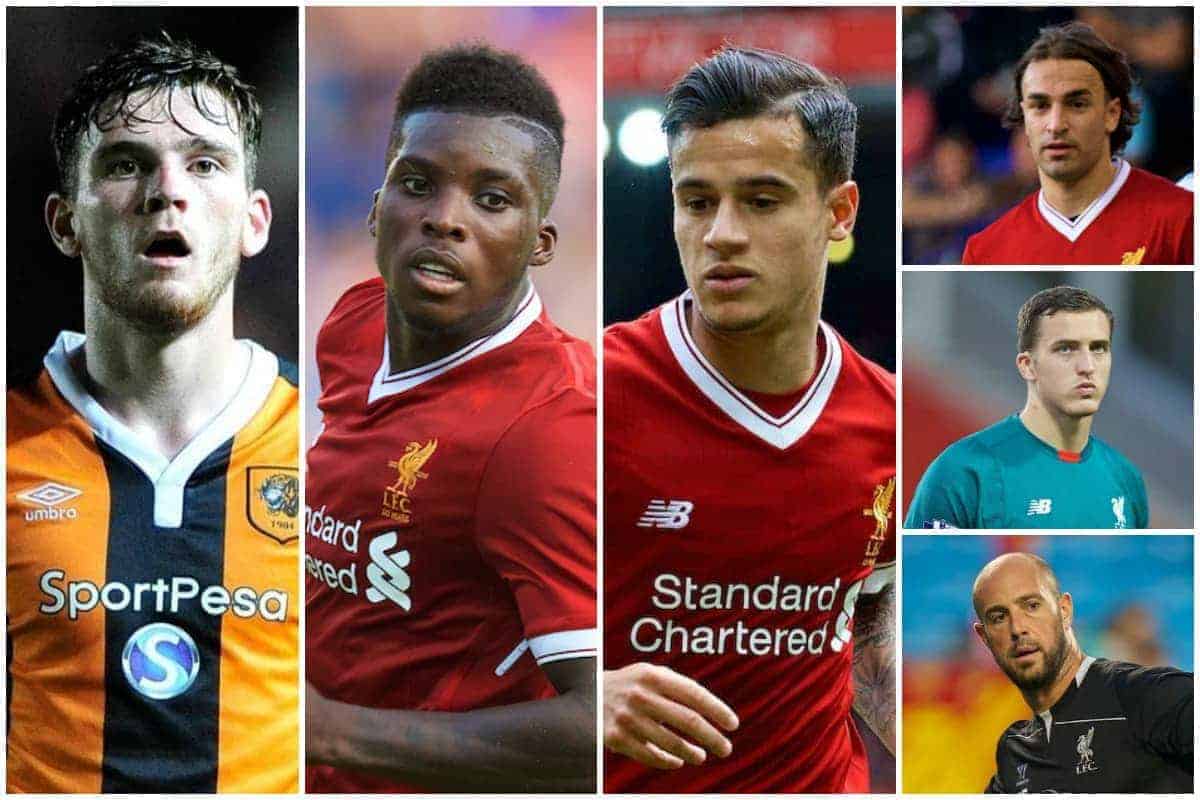 While Jurgen Klopp and his Liverpool squad endure monsoon conditions in Hong Kong, we round up the latest transfer news and rumours on Tuesday.

The Reds are in the Far East as they continue pre-season, and are set to take on Crystal Palace in their Premier League Asia Trophy ‘semi-final’ on Wednesday.

Klopp faced the press on Tuesday morning, with the focus far away from Hong Kong, as reporters grilled the German on his plans for the transfer market.

Here’s the latest from the rumour mill as the Reds’ summer preparations roll on.

Hull City left-back Andrew Robertson is set to become Liverpool’s third summer signing, with the two clubs holding negotiations over the past week.

While the Tigers are still seeking a loan deal for Ryan Kent, Robertson’s future is not contingent on the 20-year-old making his way to East Yorkshire.

Kent is with Klopp’s squad in Hong Kong, but according to BBC Radio Humberside‘s David Burns, Robertson has left Hull’s pre-season training camp in Portugal, suggesting a move is close.

If Robertson is on his way to Merseyside, it is likely to discuss personal terms and, potentially, undergo a medical.

Sky Sports claim that the deal could be worth up to £10 million, though this remains to be seen.

Having been omitted from Klopp’s touring squad for the Far East, Sheyi Ojo looks set to embark on another loan spell in 2017/18.

The 20-year-old has previously spent time with Wigan Athletic and Wolves, and ahead of the new campaign is due to have his pick of two clubs: Fulham and Middlesbrough.

According to the Liverpool Echo, the Reds have accepted both clubs’ offers for a season-long loan, leaving Ojo’s fate in his own hands.

The ex-MK Dons youngster is likely to enjoy more game time if he moved to the Championship, and in Slavisa Jokanovic the Cottagers boast a manager comfortable with puttins his faith in youth.

Furthermore, improved relations with Fulham could see Liverpool emerge successful if they return for England U19s left-back Ryan Sessegnon in the future.

No Transfer Request From Van Dijk

While progress is being made with Robertson, Liverpool are no closer to a deal for priority centre-back target Virgil van Dijk.

The Reds are expected to revive their interest in the Netherlands international this summer, after issuing a public apology to Southampton at the beginning of June.

However, according to the Southern Daily Echo, Van Dijk has not attempted to force through a move with a transfer request.

The 26-year-old was part of the Saints’ squad for their pre-season training camp in Austria, but didn’t feature as Mauricio Pellegrino’s side were held to a 0-0 draw by St Gallen, due to injury.

Southampton are said to be eager to keep Van Dijk for another year, before reviewing their stance over his future, though this could change if the player agitates for a departure. Heaven forbid Liverpool be accused of double standards this summer, but their no-nonsense approach to Philippe Coutinho‘s future is certainly familiar.

Speaking at his press conference at the Grand Hyatt hotel on Tuesday morning, Klopp insisted the Brazilian—and his other key players—would not be going anywhere.

“Not only Philippe, but it’s a good thing to talk about because in the transfer window, if the world thinks about improving a squad it’s all about bringing in new players,” he said.

“Nobody thinks that the players could make the next step and it would also be a nice idea.

“Yes, we use the transfer window of course because we have the opportunity. But the main thing I think about is how we can make the next step with the players we had last year.”

Markovic a Loan Target for Besiktas?

Klopp won’t stand in the way of some of his fringe players leaving this summer, and one of those set to depart is Serbia winger Lazar Markovic.

Watford have been linked with a move for the 23-year-old, who missed Friday’s 1-1 draw with Wigan and was left out of Klopp’s squad for the trip to Hong Kong.

However, there has been little progress with the Hornets so far, and according to Turkish outlet Fanatik, Besiktas could be looking to take advantage.

They claim that the Super Lig side are hoping to secure a loan deal for Markovic, with an option to buy next summer.

Markovic spent the 2015/16 campaign on loan with Besiktas’ Istanbul rivals Fenerbahce, but this has seemingly not deterred manager Senol Gunes, who is looking to bolster his wide ranks. The futures of both Ojo and Markovic are still up in the air, but one of Liverpool’s peripheral figures left the club on a permanent basis on Tuesday.

Ryan Fulton, who joined the Reds’ U10s in 2007 and worked his way up through the academy ranks, has signed a two-year deal with Scottish Premiership side Hamilton Academical.

This marks the end of a decade on Merseyside for the Scotland U21, but joining the Accies should be a positive move.

Fulton follows Andre Wisdom through the Anfield exit as the Reds’ second sale of the summer transfer window.

Reina on His Way to Man City? He left Liverpool three years ago, but Pepe Reina is still fondly regarded by supporters at Anfield.

The Spaniard could, however, be lining up against his old side in the Premier League next season, with Pep Guardiola looking to sign his compatriot for Man City.

The Telegraph report that while Napoli rejected an initial £2.6 million bid, City are likely to come to an agreement for £4.4 million.

Reina would serve as backup to new arrival Ederson, who joined from Benfica last month for £35 million.