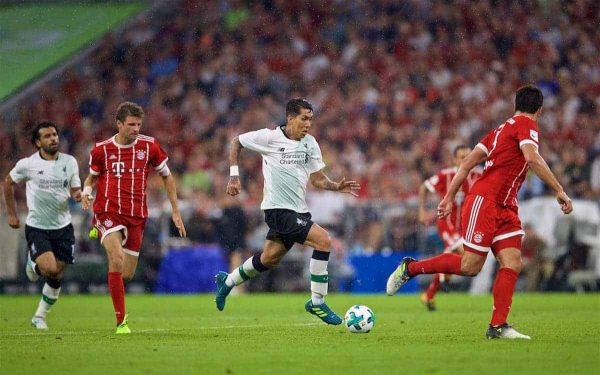 Can Reds make it 2 in 2 at the Audi Cup? – Liverpool vs. Atletico Madrid Preview

Liverpool take on Atletico Madrid in the ‘final’ of the Audi Cup at the Allianz Arena on Wednesday night, as the Reds’ pre-season nears its conclusion.

Twenty-four hours later, Liverpool take on Diego Simeone’s Atletico at the same venue, in their seventh of an eight-game pre-season schedule.

Ahead of their return to Merseyside on Thursday, the Reds will be looking to round off their time in Klopp’s homeland with a win and a productive display.

So what can we expect from Liverpool against the Liga challengers?

Klopp opted for a near full-strength side against the Bundesliga champions on Tuesday, with Mohamed Salah and Sadio Mane starting together for the first time.

Against Atletico, Klopp is likely to rotate his squad, in order to avoid fatigue as preparations continue.

Nathaniel Clyne, Joe Gomez and Divock Origi are all injured, and will miss the clash.

Meanhile, Danny Ings‘ fitness is still being carefully managed, and Sturridge picked up a knock on Tuesday.

Simeone’s side were embroiled in a bitter encounter with Napoli on Tuesday afternoon, with centre-back Diego Godin handed a red card in the second half.

Speaking after the Reds’ win at the Allianz, Klopp said that he hoped “things have calmed down because we want to play a lot.”

He is still likely to preside over a competitive clash in Munich, however, as Atletico prepare for a campaign in the Spanish top flight, having finished third in 2016/17.

Klopp can be expected to make significant changes to his starting lineup on Wednesday, and it is likely Simeone will do the same, as Atletico prepare for a trip to Brighton on Sunday.

This could mean ex-Red Fernando Torres drops down to the bench, though Simeone may hand Liverpool’s former No. 9 an opportunity against his old club in the second half.

The likes of Sime Vrsaljko, Matias Kranevitter and Tuesday’s goalscorer Luciano Vietta should be given a chance to impress.

As with Tuesday against Bayern, the Reds’ clash with Atletico will be shown live on ITV 4 and LFCTV.

This is Anfield will also be providing coverage from the Allianz Arena throughout the night, with Henry Jackson manning the live blog to bring you updates.