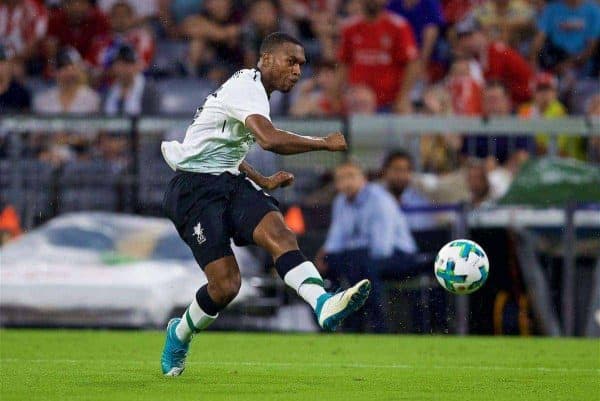 Daniel Sturridge believes the thigh injury he picked up scoring in Liverpool’s 3-0 win over Bayern Munich on Tuesday “will be OK” despite initial fears.

The 27-year-old was forced off the field with four minutes to play at the Allianz Arena, shortly after netting the Reds’ third of the night.

Adding to first-half strikes from Sadio Mane and Mohamed Salah, Sturridge sealed his first goal of pre-season, after returning in excellent shape from a summer in Los Angeles.

Speaking to reporters after the game Jurgen Klopp cast a doubtful view over Sturridge’s withdrawal, simply saying: “I hope that it’s nothing serious.”

Shortly after, however, Sturridge cut a more positive figure when discussing his fitness, explaining he is “feeling great.”

“I put in the work; I trained a lot in the summer in LA and I’ve not missed many sessions here,” he told LiverpoolFC.com.

“I’m feeling the best I’ve felt for a while. I’m looking forward to the season.

“And hopefully we can have some success this season as well.”

Sturridge’s strike, an impudent chip over the onrushing Sven Ulreich, was reminiscent of his best in a Liverpool shirt, and is hugely encouraging ahead of the 2017/18 campaign.

Now looking likely to stay on Merseyside despite previous interest from West Ham United and Paris Saint-Germain, the No. 15 can provide Klopp with an invaluable attacking option.

And as he reflected on his goal at the Allianz, and a missed opportunity minutes earlier, Sturridge served up a reminder of the instinctive talent the Reds possess up front.

“The first time I was running through, I wanted to do that but he didn’t come out,” he explained.

“I was watching from the sidelines and I remember Mo [Salah] went running through on goal and the ‘keeper went down really early.

“So before I even came on I was thinking if I run through and I’m central, I’ll try to chip him because he goes down quite quickly.

“He didn’t actually go down! So it went against my plan but it worked anyway.”

There are few players in Klopp’s squad who can score a goal like Sturridge’s in Munich, and preserving his fitness will be a big boost for the upcoming campaign.

It is likely he will sit out of Wednesday’s Audi Cup ‘final’ clash with Atletico Madrid, but Klopp will be hoping to usher him back in soon after.