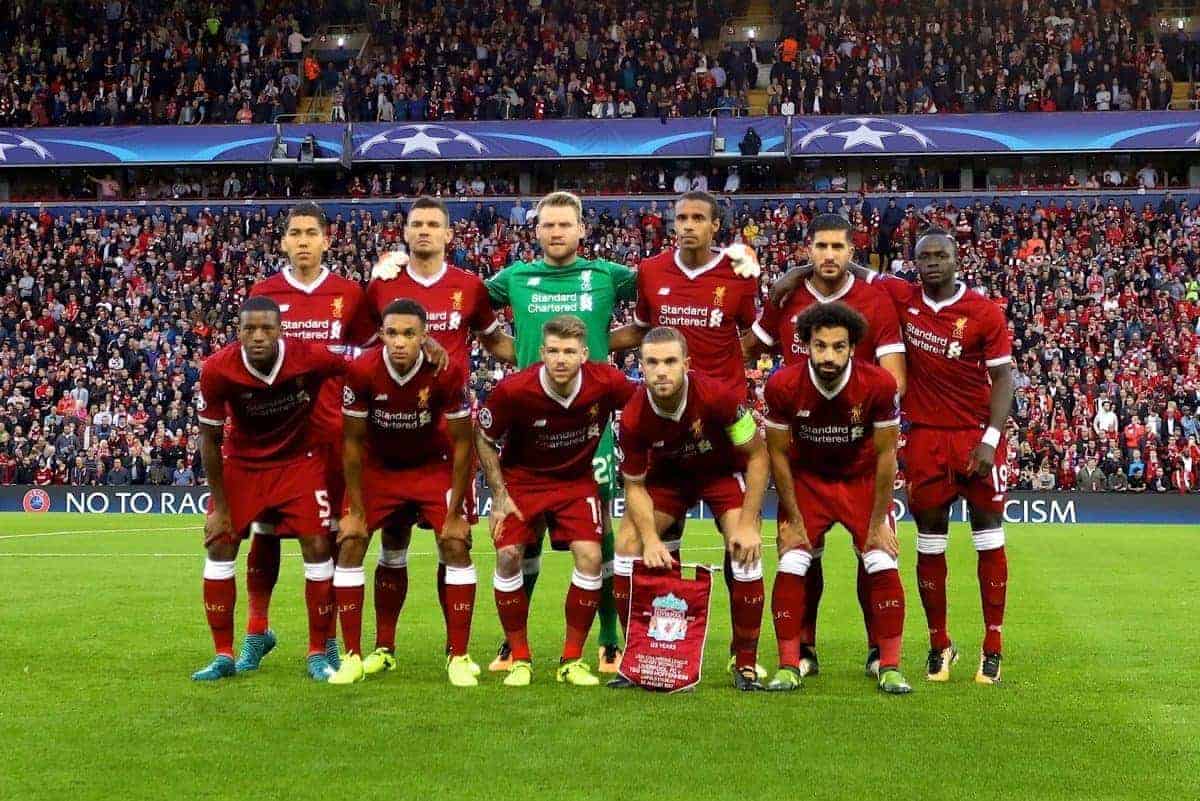 Liverpool secured Champions League football for the rest of 2017 with an excellent attacking display at home to Hoffenheim.

Neat little header from Henderson’s back pass which probably wasn’t a back pass, but the Belgian was taking no chances.

Made a save towards the end of the first half but the shot from Uth was probably going wide at the near post anyway.

Looked uncomfortable under a couple of high balls in the second half, one in particular took him an age to gather, but he collected quite a few stray balls on the ground during the game and cleared up quite regularly in his area.

Had a chance with a free kick within the first few minutes but couldn’t repeat his first leg heroics.

Good covering defence to stop Serge Gnabry in the area. The former Arsenal man decided to go to ground but it was never a penalty.

Made some lung busting runs forward in the second half, picking up an injury which eventually saw him replaced by Gomez.

Another impressive performance from the youngster.

Excellent stepping out of the defence, both to stop opposition attacks and to start Liverpool ones.

Executed a perfect tackle on Gnaby on the goal-line in a dangerous area.

A loose pass led to a Hoffenheim chance in the second half, and he was also marking no-one for the second goal, but he and Lovren would have expected help from the midfield here.

Gave the ball away for the opposition goal, and didn’t look comfortable against the Hoffenheim attack when they enjoyed a good period towards the end of the second half after changing to a back four.

Made a number of clearances, and had plenty of chance to do so as the opposition appeared to be targeting the Liverpool left.

Let Sandro Wagner get in front of him for the second, even though he might have expected a bit of help from those around him as there were two men in his vicinity.

Won free kick early on and showed great speed down the left on the overlap.

Lacked the Milner insurance which Andy Robertson enjoyed against Palace, and was caught out a couple of times, missing interceptions and losing his man.

He was a distraction to the opposition which helped Mane, but he didn’t quite have the composed end product of Robertson.

Performed much better than in recent weeks, occasionally looking to turn and pass forward when he received the ball.

He was closing down with much more purpose in defence, and even harried the opposition keeper in the first half.

Another moment of high pressing led to the fourth goal. He dispossessed Kevin Vogt high up the pitch, before squaring for Fimrino who tapped home.

Doesn’t protect the back four though, and regularly lets players wander through unopposed.

Does tonight’s showing of poor defensive protection, but effective high pressing, mean he would be better used further up in midfield?

The consistent driving force in Liverpool’s midfield as he has been throughout the calendar year.

Was on hand to dispatch a pass from Sadio Mane via Vogt for the opener, and had made a good run into the box to score the third from Firmino’s cross.

Had another good effort in the first half but his attempt to place the ball in the bottom corner saw it curl just past the far post.

An all-action performance with two goals helped his team secure Champions League qualification, and he exited the pitch to a standing ovation with his name being sung around Anfield.

Brilliant pass for the third goal, which cut through the entire Hoffenheim midfield and defence with one touch.

More involved than he has been recently but still needlessly lost the ball on a couple of occasions.

Hit the post with a well-placed side-footed effort, and though he didn’t score the ball rebounded off the post to Salah.

Through on goal in the second half and should have scored. His shot went over off Baumann’s shoulder, though no corner was given.

Had a chance at the far post after Alexander-Arnold’s free kick deflected in his direction but he couldn’t get over the header.

Made no mistake with a later chance which landed at his feet when Wijnaldum had hit the post. He was a alert, calm, and more importantly he was onside.

Had a couple more shots which failed to trouble Baumann, but he was a lurking threat which the opposition constantly needed to be aware of. Had a hand in every goal and assisted the third with a neat left-footed dink to the far post.

He was Liverpool’s creative outlet while those to the side of and behind him ran riot.

Threaded a couple of through balls to Mane in the opening stages, one of which eventually led to he first goal.

Occupied the Hoffenheim centre backs as a target man and set up his team-mates as an attacking midfielder — a complete performance was rounded off with the fourth goal in front of the Kop.

Speaking in his post match press conference, Klopp said: “Roberto Firmino – what a game he did today. He gave opportunities to the two quick boys on the wing.”

Lightning quick down the left flank, and though he should have scored when Firmno put him in on goal he did more than enough after that to become one of the game’s standout players.

He set up the first goal with some good hold-up play before finding Can, and a neat back-heel led to the third goal.

Did everything but get on the scoresheet, and consistently beat his man down the left side to create chances in the final third.

Couldn’t stop the cross for Hoffenheim’s second, and had a bit of trouble with Andrej Kramaric.

Added some bit into the midfield and continued where he’d left off in the previous game.

His time at left back seems to have helped him understand what the full back needs from him in terms of cover. Was handed a tactical advantage by his opposite number as Julian Nagelsmann’s back three and high line played right into Liverpool’s hands.

Mane and Salah were able to run riot, and with the subsequent support from midfield Klopp’s side were able to take an early lead before Hoffenheim could react.

They changed to a back four eventually and troubled Liverpool once they did, but the manager’s system had already done it’s damage.

He brought Milner on to add a bit of late bite and energy, which worked, but the enforced change of Gomez for Alexander-Arnold didn’t so much — but this probably justifies his initial decision to play Trent.