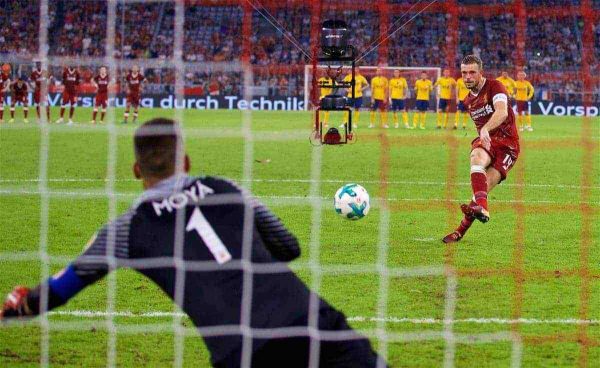 Liverpool were denied their second trophy of the pre-season campaign as Atletico Madrid won on penalties in the Audi Cup final.

Jurgen Klopp named a much-changed side as Liverpool were forced to play two matches in as many days. Phil Coutinho, Mo Salah, Dejan Lovren and Alberto Moreno were all left out of the squad.

Sadio Mane, Emre Can, Adam Lallana and James Milner all started and there were also places in the team for youngsters Ben Woodburn, Dominic Solanke and Joe Gomez.

Daniel Sturridge, who picked up an injury after scoring Liverpool’s third goal in the semi-final, was also left out of the squad.

Goalkeeper Danny Ward also earned a start despite not featuring in any of Liverpool’s pre-season matches so far this summer.

It wasn’t the most exciting first half and despite a few Liverpool chances, it was Atletico who broke the deadlock after 33 minutes.

Klopp made several changes in the second-half but it took until the 83rd minute for Roberto Firmino to make his mark with Liverpool’s equaliser after converting a penalty won by Divock Origi.

It meant the game went to penalties but Henderson’s missed spot-kick meant Atletico were crowned champions of the Audi Cup.

There was plenty of intrigue surrounding the starting line-up…

Can't expect much else from the line-up given that we played yesterday.

Has Robertson got a knock?

“Robertson should have started. Kent also in place of Woodburn” – L Muon Gante on Facebook.

“Good line-up. I fancy Solanke to bag a couple. Come on lads!” – Pete Matthews on the forums.

Gini breaking ankles. Love it. How is Henderson supposed to get in this team? #LFC

That was really good from Wijnaldum #LFC

Solanke was continuing to impress…

Dominic Solanke looks so dangerous in the air. Hardly a slouch off the ground, either. Could prove to be a very shrewd bit of business.

The more I watch Solanke, the more I am amazed Chelsea let him go #LFC

“Solanke, Woodburn and Kent in two years time together will be something else.” – Adam Taylor on the forums.

But fans weren’t happy with the defence, in particular, Milner, following Atletico’s goal…

“Milner has to be finished as a left-back.” – Pat Doran on Facebook.

Milner doing everything he can to ensure he never plays left back again, Robertson will come on at HT I think.

Don't care what anyone says, i will always love Fernando Torres because of the things I've seen him do in a Liverpool shirt #LFC

Why does Torres coming on to play against #LFC again still feel too soon pic.twitter.com/AbLgQj0VTq

#LFC are scrapping well and deserve a goal. But where's it going to come from? Maybe Torres will score an own goal!!!! #YNWA

But fans were disappointed when Atletico won on penalties…

“Losing on pens is no big deal. Game before was hard to watch. Still don’t see us able to break a bus but overall a good tournament with some positives.” – PJ Pop on the forums.

The young'uns showed some great nerve with the penalties. Turned out to be an established player that missed.

Yep, it's preseason. No it doesn't really matter. Is it still annoying to lose on a penalty shoot out? Oh yes. #LFC

Bad game on the eyes, but a good workout for the lads. Impressed again with Solanke, Ryan Kent and Grujic.

Back to bed for me.