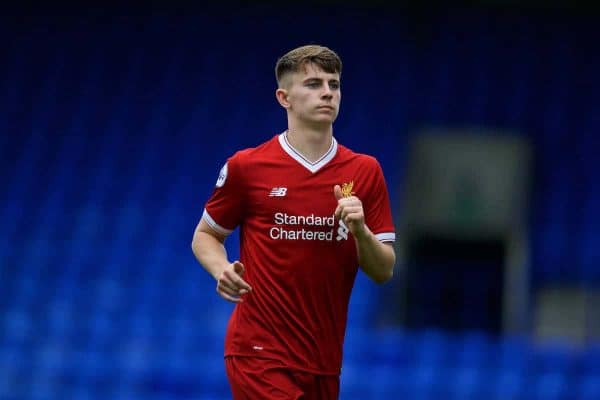 Steven Gerrard has named Ben Woodburn in his Liverpool U19s lineup for their UEFA Youth League opener against Sevilla on Wednesday evening.

The young Reds kick off their European campaign against the same opposition as the first team, taking to Prenton Park for a 5pm (BST) kickoff.

Gerrard called upon a 40-man squad for the UEFA Youth League, with Woodburn’s inclusion the biggest surprise among the Liverpool legend’s selection.

And the Wales international is set to line up for Gerrard in Birkenhead, starting in a mixed U19s side also including Kamil Grabara and Rhian Brewster.

Grabara starts in goal, behind a back four of Liam Coyle, Conor Masterson, George Johnston and Adam Lewis.

In midfield, Herbie Kane is joined by Edvard Tagseth and Curtis Jones, behind a front three of Woodburn, Brewster and Liam Millar.

Luis Longstaff, Bobby Adekanye and Glen McAuley are among the substitutes, with McAuley having scored three goals in four games for the U18s this season so far.

Liverpool U19s vs. Sevilla U19s is live on BT Sport 1 in the UK, while overseas viewers can watch the game on YouTube here.