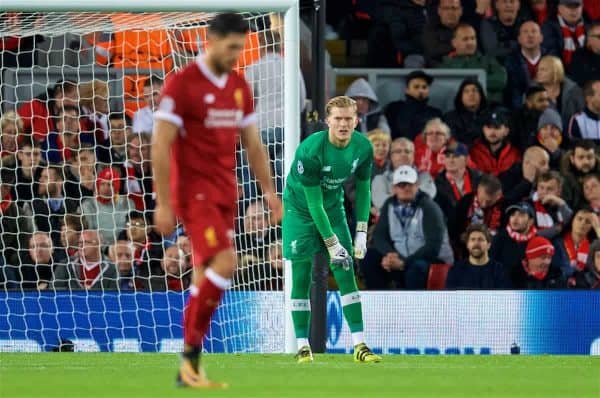 Liverpool kick-started their Champions League campaign with a 2-2 draw against Sevilla at Anfield on Wednesday evening.

Sevilla started off as the better side and got the opening goal after five minutes through Wassim Ben Yedder, but Roberto Firmino quickly equalised for the Reds.

Mohamed Salah gave Liverpool a deserved lead shortly before half-time when his shot was deflected into the back of the net and Firmino then had a chance to make it 3-1 but hit the post from the penalty spot.

Joaquin Correa managed to grab an equaliser for Sevilla in the second half as Liverpool were left frustrated by missed opportunities to extend their lead.

Here are all the reactions from Liverpool supporters on social media throughout the 2-2 draw.

Fans were split on Coutinho’s exclusion from the starting XI…

Coutinho on the bench for #lfc tonight. Am disappointed tbh

That's some bench we have tonight…

“Well if we need impact players on the bench, I can’t think of better than Coutinho and Sturridge.”

But there was frustration with Lovren when Sevilla opened the scoring…

And that's what happens when lovren starts

Dejan Lovren. There are simply no words I have to describe that attempt at defending. Just how?

Embarrassing start. Plenty of time to turn it back round but that was comical from #LFC

Awful start to the game. Dejan Lovren with another defensive howler; he's got far too many mistakes in him.

Get in Moreno. Vindicated. ?

“Moreno comfortably Man of the Match so far.”

But when Firmino missed the penalty, fans were gutted…

“We are wasting a lot of chances.”

“Painful to miss there but we need to get them back!”

– Norse Dweller on the forums.

There was frustration when Sevilla equalised…

Sevilla's first shot this half. Ugh.

We've been wasteful really. Simply have to take our chances given the way we defend.

And at full-time, supporters felt they had missed out on a victory and weren’t happy…

– Bee Dizzle on the forums.

LFC should have won, but that isn’t a bad or harmful result really *if* Reds beat weaker duo in group.

We're still capable of bagging another 9 points from 5 matches as 10 should be enough but that was disappointing. #LIVSEV #UCL #LFC #YNWA

“How anyone can defend the decision to not buy ANYONE for that dismal defence is beyond me.”

– Christian on the forums.

All those chances wasted, should have hammered them!

Harsh lessons to learn quickly in CL. Dropped points against a more experienced side not necessarily a better one.

“Another year of pulling my hair out watching Sunday league defenders.”

With Maribor and Moscow drawing too, I'm not sure how I feel about that, it's both a wasted opportunity and not a disaster rolled into one

“Disappointing performance but not a terrible result.”

– Der Kaiser on the forums.

Needed to have capitalised on a superb first-half. As it is, I'm thoroughly hacked off after that.

Missed penalty, missed about 6 really good chances, concede from the only 2 shots on target after spectacularly bad defending. Typical LFC