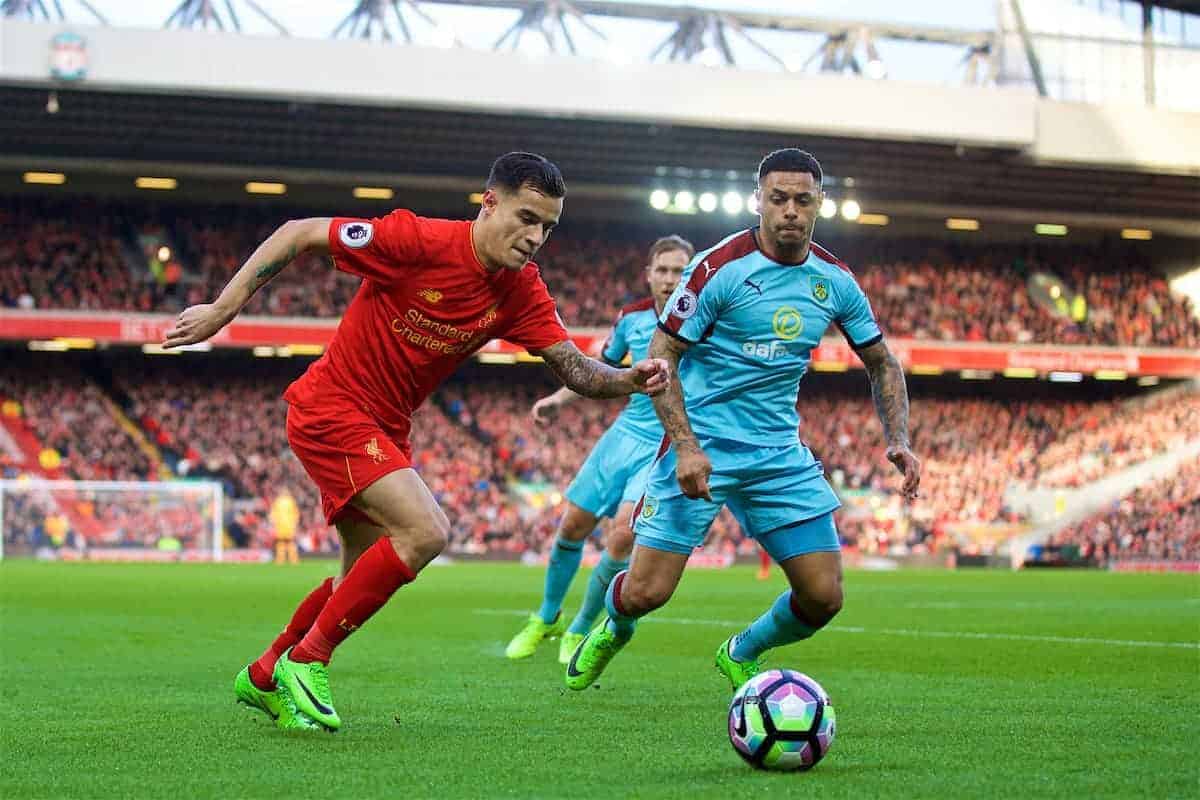 Liverpool host Burnley in the Premier League on Saturday afternoon, as the Reds aim to bounce back from two matches without a win.

It hasn’t been the most encouraging return to club football after the international break, with the Reds’ defensive deficiencies continuing to be a major issue.

Seven goals have been shipped against Man City and Sevilla, with so much good attacking play again undone by carelessness at the back.

This weekend’s visit of Burnley represents a must-win game for Liverpool, especially if they want to be genuine title challengers this season.

These were the games that the Reds so often came up short in in 2016/17, and they must come flying out of the traps early to avoid a nervy afternoon.

Burnley have become one of the Premier League‘s most resolute sides under Sean Dyche, with the manager getting the most out of a fairly limited squad.

Their style of play is the polar opposite to Liverpool’s, with long balls launched up to their burly strikers and not too much emphasis on entertainment value.

Jurgen Klopp knows exactly the threat that the Clarets pose, having lost to them away and only narrowly beaten them at home last season – a big response is needed from his players after a disappointing week.

Even without the suspended Sadio Mane, Liverpool should still have too much for their opponents, but if the visitors score first, you would have to worry.

We all need a bit of a pick-me-up after a below-par couple of performances – let’s hope it comes at Anfield on Saturday. Philippe Coutinho made a very welcome return against Sevilla on Wednesday night, although his late cameo showed his rustiness.

The Brazilian has a good chance of starting against Burnley, especially with Mane missing after his red card at City.

Simon Mignolet will come back in for Loris Karius in goal, as will be the norm in the Premier League this season, while Klopp is likely to making alterations at full-back.

Trent Alexander-Arnold will replace Joe Gomez at right-back, and it would be nice to see Andrew Robertson given another chance on the opposite flank.

The midfield trio of Jordan Henderson, Emre Can and Gini Wijnaldum have missed just one match between them this season, so Klopp may think about giving one a rest, which could offer Alex Oxlade-Chamberlain his first start for the club.

It could, though, allow James Milner a chance to come in, or see Coutinho used deeper and either Daniel Sturidge or Dominic Solanke start.

Nathaniel Clyne and Adam Lallana are still out, but they are the only high-profile injury concerns currently.

Goalkeeper Tom Heaton is out with a shoulder problem for Burnley, and both Dean Marney and Nahki Wells are also unavailable.

Last 5 At Home To Burnley (all competitions) In only one of the last 10 meetings between Liverpool and Burnley have both teams scored – last season’s 2-1 win for the Reds at Anfield.

In his pre-match press conference at Melwood, Klopp said he won’t take Burnley lightly, and hinted that he may make a few changes:

“That’s something I have to consider when I think about the lineup, we need freshness in mind and in legs.

“There will be really small spaces, not a lot of easy situations to outplay them.

“It’s really interesting to play them, because they are always on a really high level since I’ve been in the league.” Liverpool don’t have too many untelevised matches these days, but this is one of those occasions.

The game kicks off at 3pm (BST), and if you’re not fortunate enough to be at Anfield, your best bet is to follow our matchday live blog from 2:15pm. Henry Jackson is in charge of guiding you through the action.