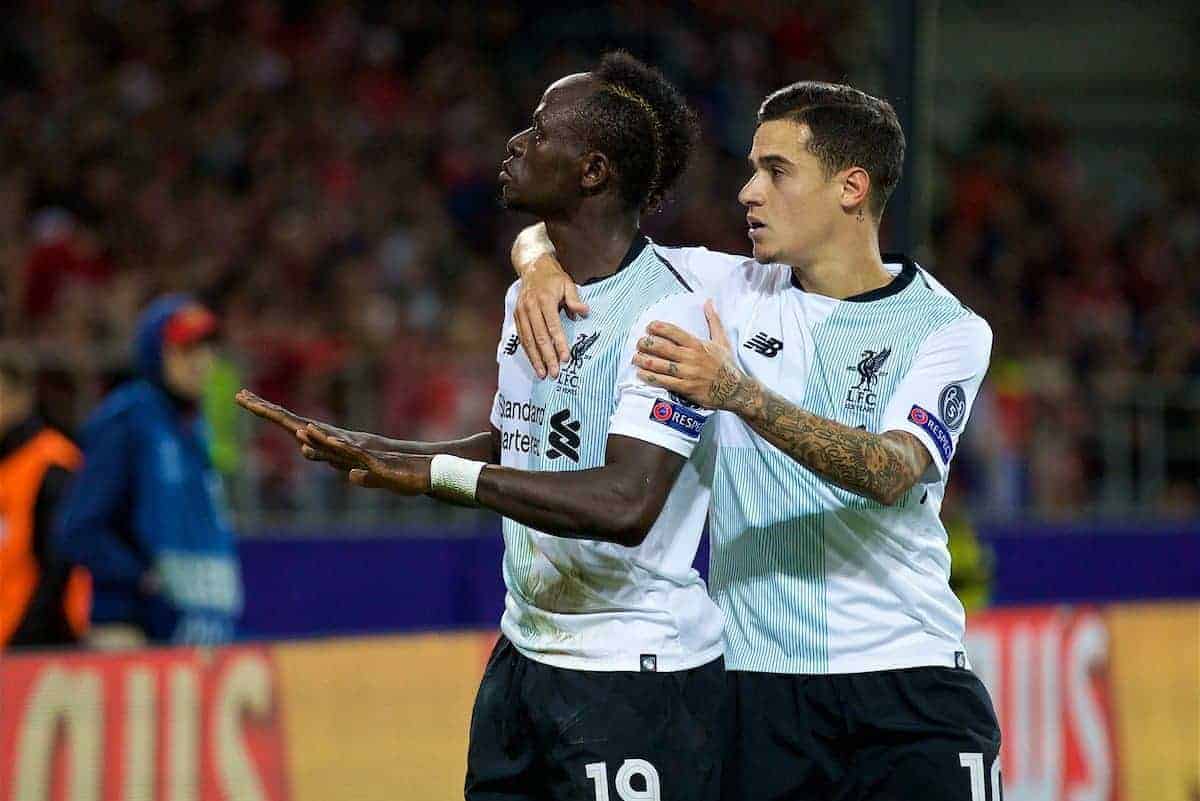 Liverpool were once again frustrated despite producing a dominant display, held to a 1-1 draw away to Spartak Moscow in the Champions League.

Jurgen Klopp made three changes to his side for their first away clash in this season’s Champions League, with Sadio Mane returning to join Philippe Coutinho, Mohamed Salah and Roberto Firmino.

But for all of their attacking might, the Reds were undone once again at the back, as Fernando sent a free-kick beyond Loris Karius to put Spartak ahead, with Emre Can poor in the buildup.

Coutinho levelled shortly after following an excellent one-two with Mane, but Liverpool were unable to find the opening for a winner in Moscow.

Here’s how supporters reacted to Liverpool’s 1-1 draw at the Otkrytiye Arena on social media and our forums.

Our best XI starting for first time. Should spank Spartak.

“Wow. The four machines are ready to eat up Moscow’s team.”

Pretty much full strength from Liverpool, there. Looking forward to watching the front 4 play together.

“Damn. Was not needed to give that ball Can. Unnecessary we get into situations like these and concede. Bad from Karius as well.”

Dominate a game and conceded first? ?

Karius has to do better there

Shouldn't be scoring a free kick there, Clive. pic.twitter.com/dlVFYVzBOy

“So sick of hearing a commentator say ‘Liverpool should be up’ and ‘against the run of play’. Have to stop this.”

Yes! Two in two for Coutinho.

“Beautiful one-two. It’s been coming. Great composure with the shot to not rush it”

Cracking goal from Coutinho to level things for Liverpool. Surprised someone didn't try and buy him in the summer.

The half-time verdict was mixed…

the goals will come if we continue to dominate like this, every mistake is punished at this level so need to be a bit more 'streetwise'?

Story of Liverpool's season so far. Attack, create chances, fail to score and concede. So predictable. So frustrating. So disappointing.

How do you not score from this situation? pic.twitter.com/2oBNY6uscD

“Half time substitutions please. Can out Milner in. Firmino out Sturridge in.”

Emre is playing is like he wants Liverpool to withdraw their contract offer.

Can & Firmino have both been poor throughout that half for different reasons. On 55mins I'd bring on Sturridge & Milner (yes Milner).

Hopes faded with 15 minutes to play…

Liverpool just seem to have lost focus in this game. Happens too often.

Players have run out of ideas. Relying on Phil magic or pressing them into mistake.

“Man, those guys suck. Packed in the box like sardines and flopping at every touch. Need to be careful of the sucker punch but we’ve been so much better than a draw would be disappointing despite it actually being a positive result.”

We need to be beating these

Liverpool again in full control of a fixture but just unable to find that critical goal to take them clear. Creating lots of clear chances

Sturridge missed a sitter late on…

What a miss by Sturridge. Omg

Sturridge. What you doing.

There's nothing Klopp can do about this finishing from so many individuals. Players have to take the blame.

And the final whistle blew for a frustrating stalemate…

Frustration everywhere for Liverpool but, again, it isn’t a terrible result. A draw away in Europe, come on. Top two all that matters.

“One point away isn’t too bad to be fair, at least it keeps us in the contest. But providing we can beat Maribor home and away, the game against Moscow at Anfield will be the final for second place. Sevilla will win the group hands down.”

All LFC but have to turn that dominance into goals. Didn't create as much in 2nd half

What an absolutely bizarre game.

Liverpool will be fine because they're in a Europa League group but that was underwhelming.

“How can they be so bad in a pretty easy group so far?”

– Ahmed Hussain on the forums.

Not the end of the world but for once you can't say it was defending that let #LFC down. It was the finishing, and it's becoming a trend.

Too often this season #LFC have gone away thinking "we should have won that". Far too often to blame it on bad luck.

“20 shots and 1 goal. We really need to sort out our finishing and final 3rd pass!”

We will not get an away game as easy as that all season long.

Some of the misses today by Firmino, Salah & even Sturridge our best finisher were incredible. Literally no words.

Every single forward lost their composure in front of goal today, Spartak were the worst team we've faced all season.

There are no easy draws in the knock out stages of the Champions League. First or second doesn't matter, only qualification out of the group

Rafa Benitez & Newcastle up next. Not had much luck there over recent years. We're gonna need it on Sunday & a performance. On we go ?