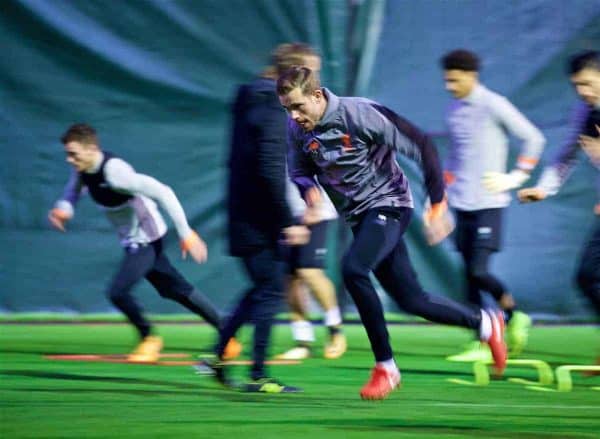 Jurgen Klopp oversaw training at Melwood on Tuesday evening, with a 23-man Liverpool squad preparing to take on Maribor in the Champions League.

The Reds face their fourth clash of Group E on Wednesday night, with the Slovenian champions taking to Anfield looking for an unexpected result.

Liverpool produced a comprehensive performance away to Maribor last time out in the Champions League, with that 7-0 victory the biggest ever European away win by a British side.

And Klopp will be hoping for a similar display as the Reds look to book their place in the last 16.

The German is likely to be without Dejan Lovren (thigh) and Philippe Coutinho (groin), however, with the duo absent from training.

Klopp suggested Lovren could still be involved if he joins his session on Wednesday morning, but this seems highly unlikely.

Nathaniel Clyne (back), Adam Lallana (thigh) and Sadio Mane (hamstring) are struggling with long-term problems, and Danny Ward (back) was also missing as he continues his recovery.

Therefore, two academy goalkeepers were drafted in, with Caoimhin Kelleher and Shamal George, reporting back from his loan spell with Carlisle United, joining the group.

Otherwise, Klopp will be able to call upon a strong squad, buoyed by their 3-0 victory over Huddersfield Town on Saturday afternoon.

Loris Karius is likely to take over from Simon Mignolet between the sticks, while Trent Alexander-Arnold and Andrew Robertson could come in at full-back.

Klopp has a selection quandary in midfield, as Jordan Henderson, James Milner, Georginio Wijnaldum, Emre Can and Marko Grujic will all be hoping to start.

But in attack, Daniel Sturridge should keep his place alongside Roberto Firmino and Mohamed Salah, though Alex Oxlade-Chamberlain and Dominic Solanke are also options.

Danny Ings and Lazar Markovic both trained on Tuesday, but are not named in the Reds’ squad for the group stage.

Liverpool Squad at Melwood on Tuesday

(* Not in Champions League squad)