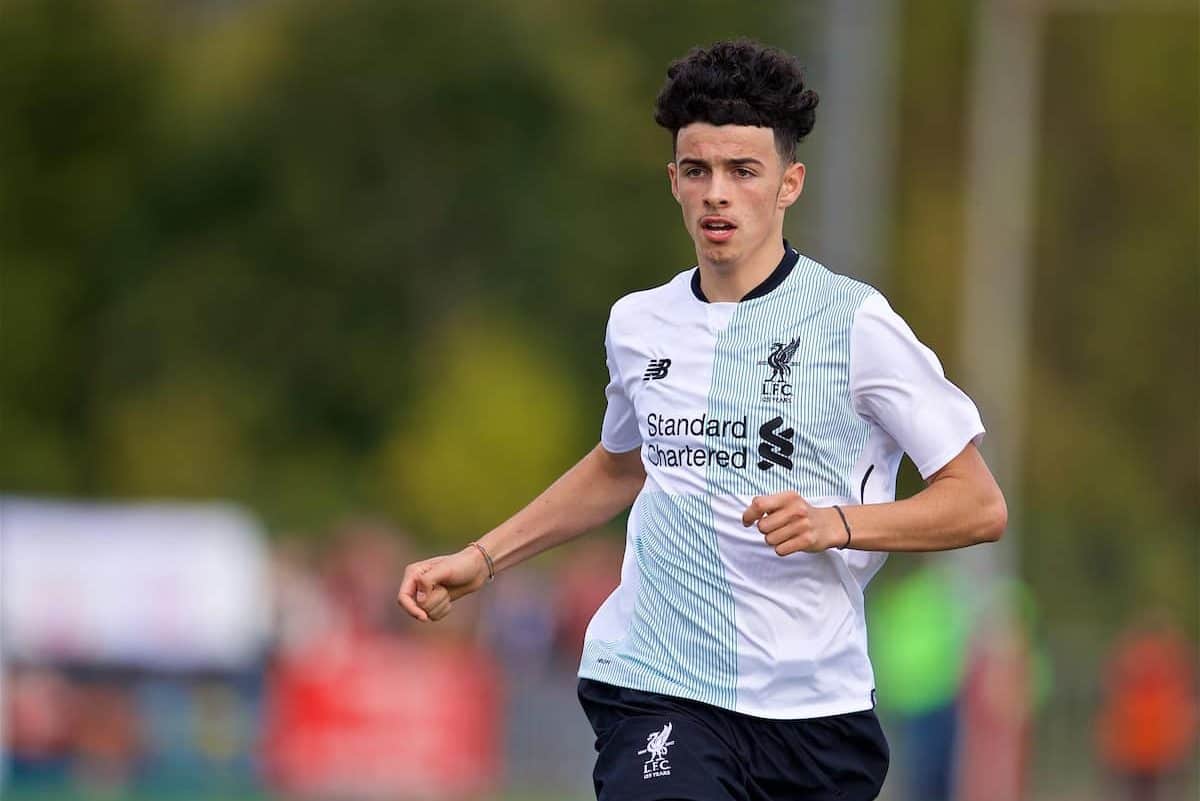 Continuing our series of Liverpool FC academy profiles, here’s the lowdown on Curtis Jones, the young midfielder who has caught Steven Gerrard’s eye.

Comparisons with Gerrard have not served Liverpool’s academy hopes well in recent years, with Jordan Rossiter, Adam Phillips and Cameron Brannagan all lumbered with the albatross.

Rossiter is now with Rangers, Phillips captains the Norwich City U23s and Brannagan is facing an unceremonious exit next summer after mysteriously falling out of favour under Jurgen Klopp.

Unlike Jones, however, none of those players honed their talents with the Reds’ legendary No. 8 in the dugout.

But while it would be wise to downplay suggestions that the 16-year-old Scouser could go on to emulate one of Liverpool’s greatest ever players, Jones is certainly a talent. A local lad, Jones joined his boyhood club at U9 level, and has moved swiftly through the ranks since, with his biggest step to date coming two months before his 16th birthday, when he made his debut for the U18s.

Having previously turned out for Barry Lewtas‘ U16s, Jones was called into Neil Critchley‘s squad for their home clash with Middlesbrough midway through the 2016/17 campaign.

While another prodigious youngster, Rhian Brewster, grabbed both the goals in a 2-1 win, Jones certainly impressed.

The midfielder hit the post with a curled effort with the scores still at 1-1, nearly capping a standout performance that has become customary on his maiden appearances.

He scored in his debut in the FA Youth Cup, a penalty-shootout win over Crystal Palace in 2016, and more recently found the back of the net twice on his first outing for the U19s in the UEFA Youth League.

That day saw him fire twice in a 4-0 win over Sevilla, and with Gerrard watching on alongside Critchley, it was clear the 37-year-old was impressed.

He’s not the only one, of course, with Liverpool’s elite development coach Pepijn Lijnders, Klopp’s liaison between first team and academy, name-checking Jones at the start of 2017.

It will have been Lijnders’ input that saw Jones called up to train alongside Klopp’s squad days after that FA Youth Cup over Palace, when the youngster was still just 15.

There Daniel Sturridge‘s took him under his wing, with Jones going on to thank the striker on Twitter for “showing me love today [and] giving me great advice for my first session with the first team.”

And Michael Beale, who was speaking on his initial departure from Merseyside around the same time, lavished praise on the teenage midfielder.

“He’s a player who can outplay you one-on-one, can play centre midfield, he can play wide, he can play as a deep midfielder.

“We’re developing these players now that are able to play in a range of different positions.” As Beale attests, Jones is a dynamic midfielder who can operate in a variety of roles, but he is arguably at his best off the leash in a box-to-box duty.

Able to glide past defenders with ease, he is an accomplished dribbler with a strong understanding of space and how the game is playing out around him.

As his feats since stepping up to U18 level have proved, Jones has an eye for goal, with an array of finishes to draw upon, including powerful volleys and close-range tap-ins.

Jones’ game certainly bears hallmarks of Gerrard in the late 1990s, when the captain-in-waiting was utilised in a roving role.

And in his new position as manager of the U18s, while he will give him the freedom the grow into his own player, Gerrard is looking to build around his midfield diamond. “This team is built around him. He’s a top talent and he’s a top player,” he said in September.

“It’s important he gets on the ball as much as he can because he makes us play. He’s got that quality to create something out of nothing.

“But it’s important we don’t get carried away. Curtis is doing really well, he’s improving all the time.

“It’s just important we keep giving him the right values and we keep working on the other side of his game. We know he’s fantastic on the ball, we are trying to improve the whole package.”

Developing Jones’ tactical and mental attributes, as well as his fitness, will be key in the coming years, as his trajectory is clear mapped out for him. Having made 12 appearances in the U18 Premier League last season, despite only turning 16 in January, Jones is likely to establish himself as a key player for Gerrard this campaign—and then, the U23s.

From there, the hope will be that he follows the likes of Trent Alexander-Arnold and Ben Woodburn and carve out a role under Klopp in the future.

For a player who only attended his school prom in June, the future is looking bright.