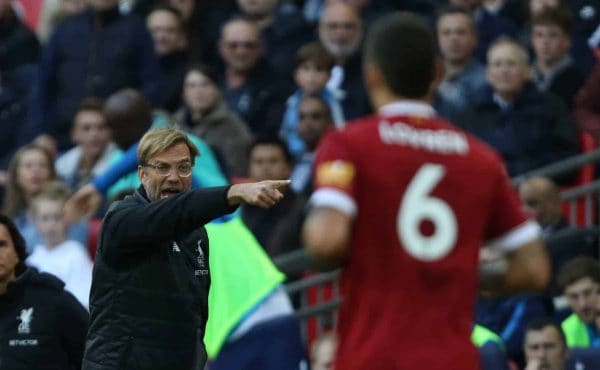 Jurgen Klopp: Wembley collapse was “pretty much all our fault”

Jurgen Klopp said his Liverpool players have nobody to blame but themselves for their Wembley humbling.

Klopp’s men suffered more defensive woe as they were swept aside 4-1 by a rampant Tottenham.

Sloppy defending saw the Reds trail 2-0 after 12 minutes, with the second goal coming when Dejan Lovren missed a headed clearance on the halfway line, allowing two-goal Harry Kane to run in behind and set up Son Heung-min.

Klopp felt he could have dealt with the situation had he been on the pitch.

“The whole game was pretty much all our fault,” he told Sky Sports.

“We made it much too easy for them. The first goal was a little throw-in and we were not really there. The second goal was from a counter-attack, when the ball passed Dejan it was already too late.

“If you were to shoot the ball another 500 times I’m pretty sure Dejan Lovren gets the ball.

“I don’t want to say too much but if I’m involved in this situation on the pitch then Harry cannot get the ball.

“Coming back into the game with the goal we had our chances, but it’s nothing to talk about today.”

The result moves Spurs level on points with second-placed Manchester United, while Liverpool have won just one of their last six Premier League games and are already 12 points behind leaders Manchester City.

Klopp’s men have a goal difference of minus two and have conceded three more times than second-bottom Bournemouth.

But the former Borussia Dortmund coach is confident the club can solve their defensive issues.

Kane scored the opener before teeing up Son for the second. Liverpool pulled one back through Mohammed Salah, but Dele Alli restored the hosts’ two-goal lead right before the interval and Kane added a fourth in the second half.

And Kane, whose goals were his first at Wembley in the Premier League, felt Spurs’ winning margin could have been even greater.

“We wanted to start fast and get the crowd on their feet and that’s exactly what we’ve done,” Kane said.

“When it went 2-1 we had to stay focused and we knew we were going to get more chances. “We probably could have (scored more). Their goal came against the run of play, we were really pushing. We could have had the third and fourth early on.

“Defensively we were solid and we were very good on the counter-attack. We’re very happy with the performance.”