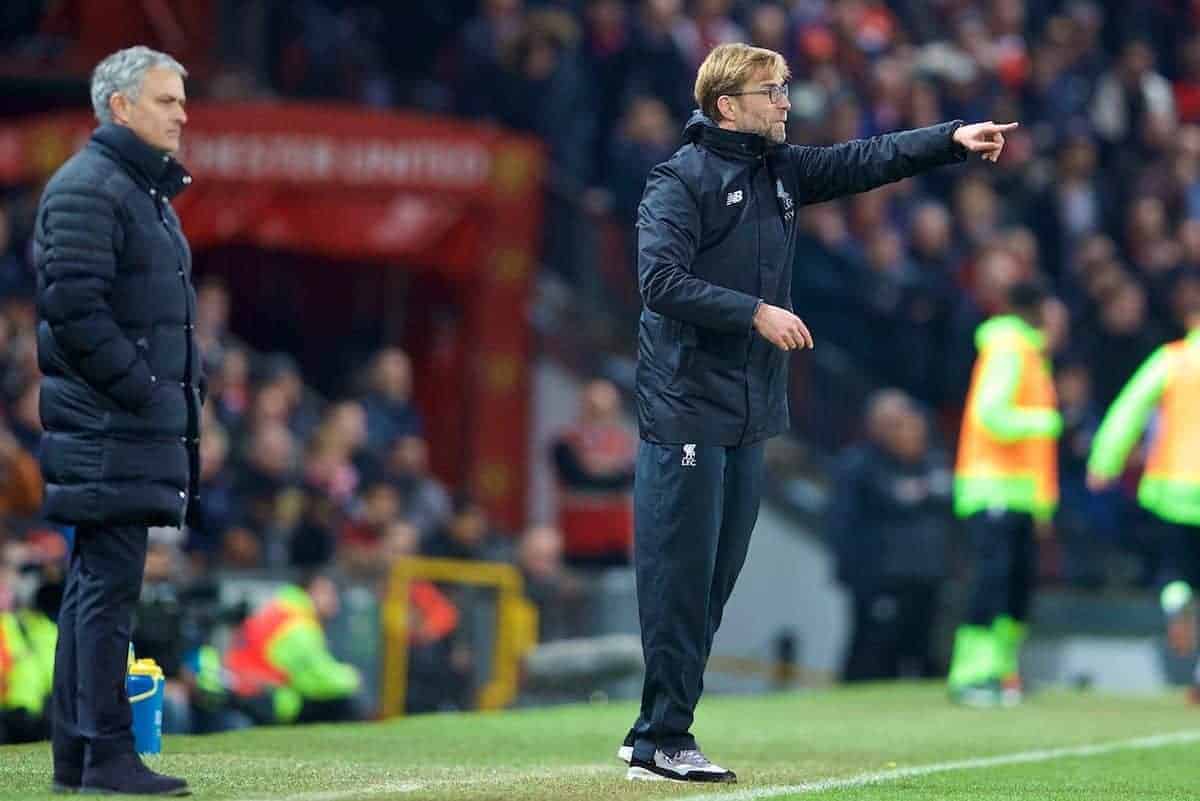 Liverpool host Man United in a huge Premier League clash on Saturday lunchtime, with the Reds looking for just their second win in eight matches.

The likes of Man City and Chelsea may be doing their best to change it, but this remains the undisputed biggest game in English football.

The rivalry between Liverpool and United is unlike anything else in the country, and Saturday’s clash promises to be a fascinating encounter.

It is a game that both sets of supporters dread losing, but one that makes for legendary post-match celebrations if you win—we have all experienced those highs and lows over the years.

United come to town as arguably the favourites to take all three points, having dropped just two in the league in their first seven games.

Jose Mourinho’s side have had an easy run of fixtures, but they look a strong all-round unit, and Nemanja Matic and Romelu Lukaku are excellent signings who have turned United into title contenders. Liverpool, meanwhile, continue to frustrate despite often playing well, defending poorly and lacking ruthlessness in front of goal. It is now just one win in seven, in all competitions.

The Reds’ bitter rivals don’t necessarily look any better in between each penalty area, but the difference in quality at both ends of the pitch is why they already have a seven-point lead over them.

These are games that often turn with one dodgy refereeing decision or a moment of individual brilliance, and Saturday’s much-anticipated meeting could be no different.

Deep down, both Mourinho and Jurgen Klopp would not be disappointed with a point apiece, but they will feel their respective sides have enough to snatch all three.

A nail-biting 90 minutes at Anfield awaits.

Liverpool have been dealt a big blow with the news that Sadio Mane will be out of action for approximately six weeks with a hamstring injury.

Once again, the international break has struck down a key player.

Brazilian pair Philippe Coutinho and Roberto Firmino didn’t return from duty until Thursday, which is far from ideal for Klopp.

Both are expected to start with Mane already unavailable, though.

Joe Gomez is likely to be preferred to Trent Alexander-Arnold at right-back, while on the opposite flank, Alberto Moreno should start, despite Andrew Robertson providing stiff competition.

Gini Wijnaldum was anonymous at Newcastle United in the Reds’ last game, and the Dutchman would likely have been dropped if Mane was fit. A much-improved performance is required from him.

Nathaniel Clyne and Adam Lallana are still missing through injury, but the English duo are slowly nearing a return. Their stock has actually risen since being on the treatment table.

Paul Pogba is out for United, with the midfielder’s return date still unknown, and Marouane Fellaini is unavailable after suffering knee ligament damage with Belgium.

Michael Carrick and Marcos Rojo are also injured, while Zlatan Ibrahimovic is yet to make his comeback.

Lukaku and Phil Jones are both expected to recover from knocks, while Marcus Rashford and Anthony Martial will battle it out for a start on the left wing.

Last 5 at Home to Man United (All Competitions) Only one player has scored a hat-trick in this fixture at Anfield during the Premier League era—Dirk Kuyt in 2010/11, with the Dutchman’s treble inspiring Liverpool to a 3-1 win.

Speaking at Melwood on Friday, Klopp called for the backing of Anfield as his side look to address their poor form with a win over their rivals:

“It’s Anfield, our stadium, the first game with the Kenny Dalglish Stand. We want to use all the power we can create in this wonderful stadium.

“I don’t think it makes sense that we look at it as a completely normal game, it isn’t.

“It means there are no excuses, you have try to everything. I understand it as an opportunity.

“A fantastic game, two really good football teams, the weather should be good, so it’s prepared.”

The match is live on Sky Sports Main Event, with coverage starting at 11.30am (BST). Expect Jamie Carragher and Gary Neville to be on good form!

Our matchday live blog will be in full swing from 11.45am, with Henry Jackson tasked with guiding you through what we hope is a much-needed Liverpool victory.