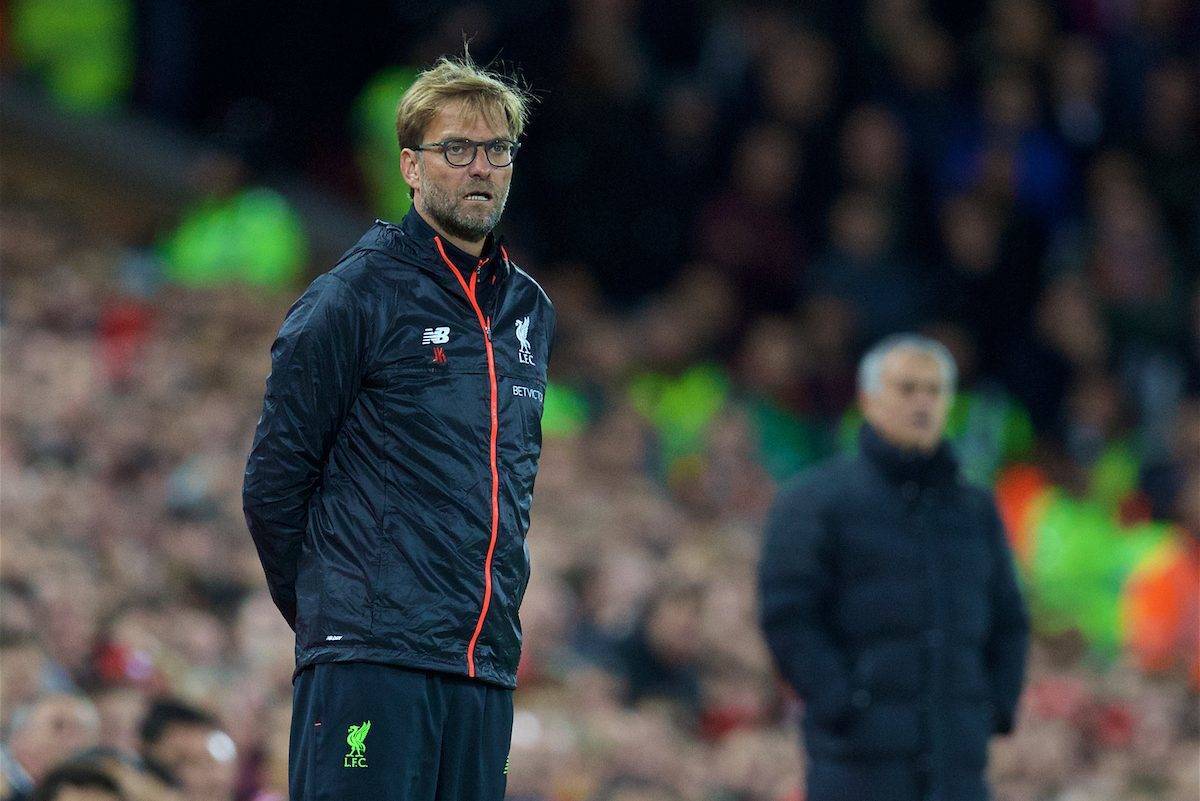 It has felt like a long two weeks since Liverpool’s 1-1 draw at Newcastle, but the international break is now over.

The Reds are badly in need of some momentum, despite only actually losing once in the Premier League this season, with Jurgen Klopp finding himself under an element of pressure after just one win in the last seven games in all competitions.

There are 10 matches to look forward to over the next three days – here’s a look at the best of the upcoming action.

The biggest game in English football No match in England is as hyped as Liverpool vs. Man United, regardless of where both sides are in the table, and they meet at Anfield on Saturday lunchtime.

It might not be a great contest, considering the timing of the match and certain players arriving back late from international duty, but it is sure to be as fierce and controversial as ever.

The Reds haven’t got going yet this season, but victory at home to their north-west rivals would be a huge shot in the arm for Klopp and his players.

United, meanwhile, have dropped just two points in their opening seven games, but this is the first time Jose Mourinho’s side face any of last season’s top six.

This is a fixture that is always difficult to predict, but if Liverpool are to win, they must be stronger at the back and more ruthless in front of goal. They need their form of last season against their top six rivals to return.

The final outcome will be determined by very fine margins – fingers crossed our weekend hasn’t been ruined again by Saturday mid-afternoon. No side in Premier League history has made a worse start to a season than Crystal Palace, with the Eagles losing all seven games so far and not scoring a single goal.

There has been no sign of change since Roy Hodgson replaced Frank de Boer – the former Reds boss has lost his first three games in charge – and if things don’t improve soon, they will be doomed by Christmas.

A tough run of matches doesn’t get much easier on Saturday, as Chelsea visit Selhurst Park hoping to inflict more pain on their opponents.

Antonio Conte’s side are one of the most ruthless in the division, and it would be no shock if Palace’s win-less, goal-less run continued into next weekend.

Anything is possible in the Premier League, though, and with Alvaro Morata and N’Golo Kante missing for the visitors, Palace may just believe they can surprise everyone.

That seems very unlikely, however.

Another goal-fest for Guardiola’s title favourites?

Man City‘s 1-0 win at Chelsea in their last outing was an eye-catching result, and it firmly established them as favourites to win the league this season.

They displayed defensive solidity that hasn’t always been on show, and in Kevin De Bruyne, they have the best player in the country in their ranks.

Saturday’s visit of Stoke City should be a much more routine afternoon for Pep Guardiola’s star-studded outfit, who could even have Sergio Aguero back in their squad.

Stoke have become something of a nothing team these days, and barring a huge slice of luck or a red card to a City player, anything other than a home win feels unlikely.

Expect City to still be topping the table after the weekend – they will be cheering on Liverpool at Anfield before their game kicks off. Tottenham and Arsenal both keep ticking along nicely, almost going under the radar while their rivals earn more column inches.

Harry Kane was again in devastating form as Spurs dispatched of Huddersfield a fortnight ago – are there many better strikers in world football currently? – and his side look such a strong all-around unit.

They host a beleaguered Bournemouth side this weekend, and although Wembley is still not proving to be too reliable a temporary home ground for Spurs, they should have far too much for their opponents.

Arsenal have a trickier game than their north London rivals, with Arsene Wenger’s team visiting a Watford outfit impressing under Marco Silva.

These are the matches the Gunners are experts at winning, though – they have just rattled off consecutive wins against Brighton & Hove Albion and West Brom without playing well – and they should sneak three points at Vicarage Road.

Liverpool could do with their top-six adversaries coming a cropper.