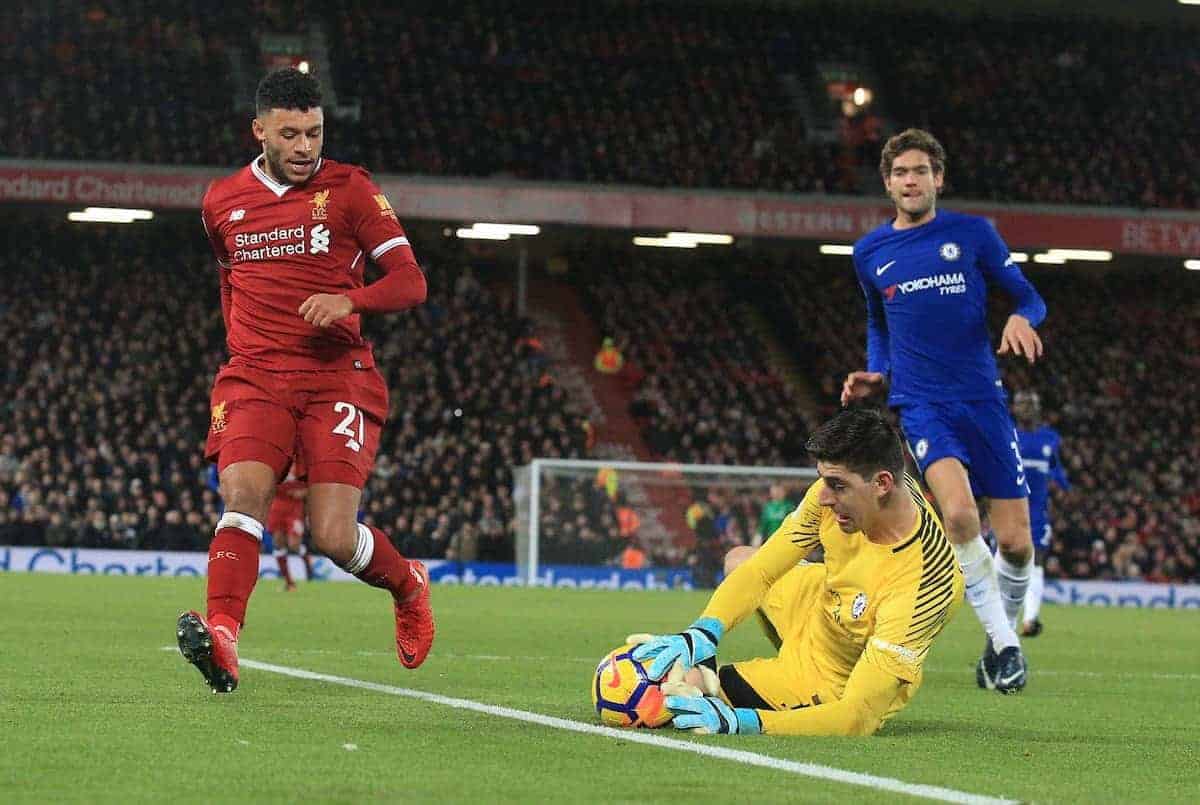 Liverpool saw Mohamed Salah‘s goal cancelled out late on as they were held to a 1-1 draw at home to Chelsea in the Premier League on Saturday.

The Reds looked to be heading for a priceless victory after Salah’s 65th-minute strike put them ahead against his former club.

But fate intervened as second-half substitute Willian’s cross sailed beyond Simon Mignolet to grant the away side an equaliser, depriving Liverpool of a much-needed three points.

Jurgen Klopp‘s side are left out of the Premier League‘s top four despite Tottenham dropping points at home to West Brom earlier in the day.

And following their 3-3 collapse away to Sevilla in the Champions League in midweek, this serves as another blow to the Reds’ momentum, despite going unbeaten for six games.

Klopp made five changes to a mixed reaction…

Big gamble from Klopp leaving out Mane and Firmino #LFC

Mané, Firmino, or Wijnaldum all on the bench and Lovren's not even in the squad. <this is fine meme>

Chelsea players will be delighted to see that team, let's be honest.

“This will either be astoundingly good or catastrophically terrible. I’m not sure there’s the possibility of middle ground…”

Klopp resting Firmino and Mane for Stoke on Wednesday. Sound.

The line up looks a gamble to me. Hope Klopp has got it right otherwise he'll have questions to answer. Lets do these reds #lfc

I will always acknowledge Liverpool's flaws, but how on earth did this Chelsea side win the league last season?!

“No shot on target. Crowd in complete silence. Most boring home performance of the season.”

Not a bad first half. Got to watch Hazard on the break though. Milner has been rubbish. Wouldn’t be against bringing Gini on.

“Chelsea are way better than us, we haven’t laid a glove on them and they look like scoring every time Hazard gets the ball.”

Everyone desperate for Manè & Firmino to come on. Hopefully we can keep it level for a bit longer then bring them both on to take advantage of tired Chelsea legs.

Is a draw (of any kind) a good result for #LFC today?

But Salah put the Reds ahead against his former club…

Get in there. Mo Salah!

“Who else but Mo to punish Chelsea?”

WHAT A GOAL SALAH!

He is just so direct with his movement. Always committing defenders. Good finish #Salah

This was cancelled out by Willian’s wayward cross…

Chelsea's goal was coming – Liverpool had got far too deep and were inviting pressure on. Need an outlet.

Not sure if Willian meant that, mind.

“The day he leaves our club will be a never ending celebration.”

Terrible, terrible goalkeeper. Stop calling him “one of the 6 best in the league”.

But the Reds were unable to seal a late win…

FT: Liverpool 1 Chelsea 1. A fair result on the balance of play although hosts will be disappointed that for the second match in succession they let a lead go late on in.

Good point, fair result. Subs should have came on earlier, but we shouldn't have dropped that deep regardless. Salah is magic but we knew that already

On the balance of things, not a bad result for #LFC. Feeling os could have been better though.

Close contest and the scoreline reflects it.

Would have brought Mané on earlier, to capitalise on the opportunities LFC had to counter at 1-0.

Not a bad performance or scoreline but also gah.

1-1 a fair result. The number of late goals we concede is constantly an issue, which Klopp's in game rarely helps stop.

Well, that was not fun.

Nature and timing of the equaliser it what stings. Fair result on reflection though.

Fair result, but tough to drop points due to a mis-hit cross and a stroke of luck. Liverpool really need a controller in midfield.

Would've taken a point pre-match having seen the starting XI but can't help feel disappointed now. Failed to react to the Chelsea changes until it was too late. Bit like Tuesday in that sense.

2nd time in a week where a draw feels like a loss.

I'm really fed up of Chelsea getting something at Anfield with ridiculous goals. But there we are.

Decent result. Salah is fucking brilliant. No need to over analyse that. End of.