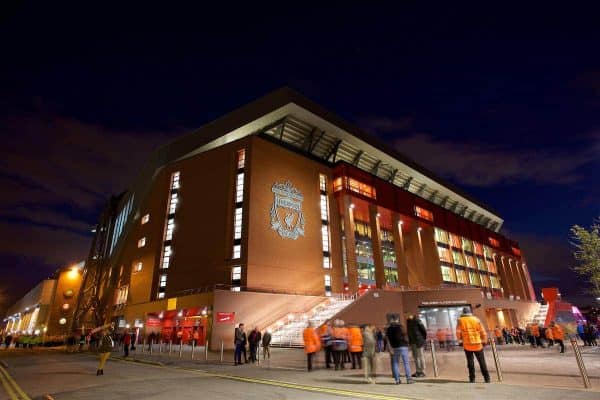 Behind Anfield’s corporate curtain: Liverpool FC and the future of football

The visit of Maribor to Anfield gave Jeff Goulding a rare opportunity to swap the Kop for the posh seats and peer behind the curtain of corporate Anfield.

Attending the recent Champions League game against Maribor in Liverpool’s hospitality suite of the new Main Stand was quite an eye-opener and forced me to think deeply about the direction football generally, and our club specifically, is taking.

The ownership and governance of football clubs is increasingly an issue that vexes supporters. Some argue that the sport has been usurped in the interests of finance and profits; their voices increasingly ignored. Others complain their clubs aren’t making or spending enough money.

Interestingly, when it comes to the ownership of Liverpool Football Club, this was a largely uncontested issue for much of the history of the club. A succession of wealthy local benefactors had held the reigns in the boardroom for more than a century, while the attitude of supporters to them was one of indifference. After all, as Bill Shankly said, they only existed to sign the cheques.

Superficially at least, it was the cataclysmic decision of David Moores to sell the club to Tom Hicks and George Gillett that changed that. While it is true to say that the nightmare that followed this leveraged buyout certainly focused the minds of Reds, in actual fact the rot had already set in with Roman Abramovich’s acquisition of Chelsea.

Even before that Reds were already beginning to suspect that the Anfield hierarchy were being consistently outflanked by teams like Manchester United in terms of marketing and finance. However, it never felt like they were beyond reach. All it would take was a few astute signings and we’d be back to winning ways, we thought, the other stuff would take care of itself.

The arrival of Roman and his rubles changed everything. Suddenly, success could be bought and its price seemed way beyond Liverpool. How could the most successful club in English football history be unable to compete with Chelsea, of all teams?

Suddenly, the whole question of Liverpool’s financial competence was thrown into sharp focus. Questions were asked about the motivations and competency of executives and Moores, once seen by many as a fan in the directors’ box was now considered part of the problem.

From that moment on, many Liverpool supporters became fixated on questions of finance and how the club is run. For some that has expressed itself in a desire to see the club’s net spend enter the stratosphere, for others its been about wanting a greater say in how the object of their affection is run. I fall into the latter category.

For me, the yearning for ever greater spending in the transfer market in order to compete with rivals who are already over the horizon and long gone is unsustainable and is already leading to some supporters becoming desperate to replace one set of owners with another, hopefully richer variety.

The trouble with this is, eventually you run out of oligarchs and sheikhs who are looking for a plaything through which they can spread their money. What’s left are buyers who see the potential of football clubs to at least pay their own way, but whom might just produce a dividend.

The massive growth in TV revenues has only served to fuel this process and has led to increasing opportunities for clubs to enter into commercial partnerships and boost revenue further. The result has been ever increasing transfer fees and, though supporter campaigns have slowed the rise, ticket prices are preventing the sport’s grassroots support from seeing their teams in the flesh.

The Premier League today has all the feel of a giant bubble, stuffed so tightly with money that eventually the whole thing will blow up in all our faces. What then?

This is a question that exercises my mind more, the older I get. While I often romanticise about the old days, the standing Kop, affordable tickets and trophies, football back then was no walk in the park.

Surely none of us would like to go back to the unsafe and unsanitary stadiums in which supporters were treated like cattle. Yet, as one who lived through that period, I can tell you there was a grittiness and an authenticity to the game back then. While I’d never argue that, back then, the corridors and boardrooms at Anfield echoed with the voices of Kopites, I can say that the club felt like it was ours in them days.

We believed that the people who ran Liverpool wanted it to succeed for footballing reasons not financial ones, even if they didn’t seem too interested in the experiences of those who turned up to watch the team.

Then along came the stadium disasters of the 1980s; Heysel, Bradford and Hillsborough. These moments in football history changed the landscape completely. Supporters rightly demanded safe stadia, they naturally want to be able to take their kids to the game and be treated with respect, not herded into pens like criminals.

The need to change the way the game was watched sounded a death knell for the old model. It soon became clear that the moderately rich fan in the boardroom was never going to be able to finance the type of transformation required. Enter Sky and Murdoch and the super rich, meaning supporters were, in my view, stuck between the devil and the deep blue sea.

Ever since, the choices have seemed stark. You either have to accept the monopolisation of the game by big business or face extinction. Locked into this mentality, many supporters appear trapped in a perpetual state of unhappiness. Spend a few hours on social media during a transfer window and you’ll get my point.

I’m increasingly forced to ask myself, is this really the only show in town? Do we really have to accept the ‘Sophie’s choice’ of picking between a game run in the interests of business, in which a few clubs succeed and the rest just make up the numbers, and the austere stuff of the 70s and 80s?

I dont believe so.

There has to be a balance point between generating enough revenue to make the club successful and retaining the grit and authenticity of the game I fell in love with. Perhaps counter-intuitively, this is a conversation I got into with a representative of a partner organisation, while observing the game from the comforts of the Legends Lounge, in the revamped Main Stand, after the Maribor game.

We both agreed, to my surprise, that while the surroundings we were in were exceptional and the experience luxurious, even surreal, it could not trump the feeling of being in the Kop surrounded by ordinary supporters, unsanitised, chaotic and raucous. The trouble is the atmosphere in the cheap seats that night was anything but raucous.

I don’t believe this is an accident. Instead, it is a consequence of the processes described above. In their attempts to model the game as entertainment and supporters as customers, with all that word entails, I believe, football owners risk killing the goose that laid the golden egg.

Customers complain when they’re not entertained. Their role is to consume the product, not support it through good times and bad. This is a fundamental difference between how business sees the game and how people like me do.

Of course, people like me won’t be around forever. Soon we will be replaced by the customer class modern football seeks to breed. When that happens, football grounds will become ever more quiet and soulless places, devoid of creativity, wit and imagination.

As is so often the case, the solution, in my opinion, lies somewhere in between the two models. After all, even a supporter-owned football club would most likely form relationships with businesses, in order to increase revenues. We’d just have different ideas about how that revenue was used. Supporters would likely prioritise cheaper tickets, links to the community and stadium expansion over profits and dividends, for example.

The obvious issue for supporters however, is that in the hyper-inflated market of the Premier League, fans lack the resources to own and run their clubs. So we’re left with what is to me an obvious truth. Supporters need owners with capital, and in turn owners need supporters not customers.

Customers move on when they grow tired of the product or a flashier more attractive model appears on the market. Supporters however have a symbiotic relationship with the product, which is of course their club and their team. That’s why I believe we should be more involved in the ownership and governance of football.

Liverpool have taken very encouraging steps recently towards more meaningful supporter engagement. But they must go much further; all clubs do. The elephant in the room will always, for me, be the need for supporters on the board.

The search among a vanishingly small pool of super-rich ‘sugar daddies’ for a saviour may deliver transient success for a few, but it will do nothing to bring the aspirations of clubs and their supporters closer together. I believe that, because in my mind the only way football can become sustainable for all while retaining its authenticity and community focus, is if it is run by a partnership between, supporters, players, employees and investors.

When we’re all in it together, we all win. My experience in the posh seats, no matter how luxurious, has only strengthened that belief. I believe also that investors with real insight see it too.