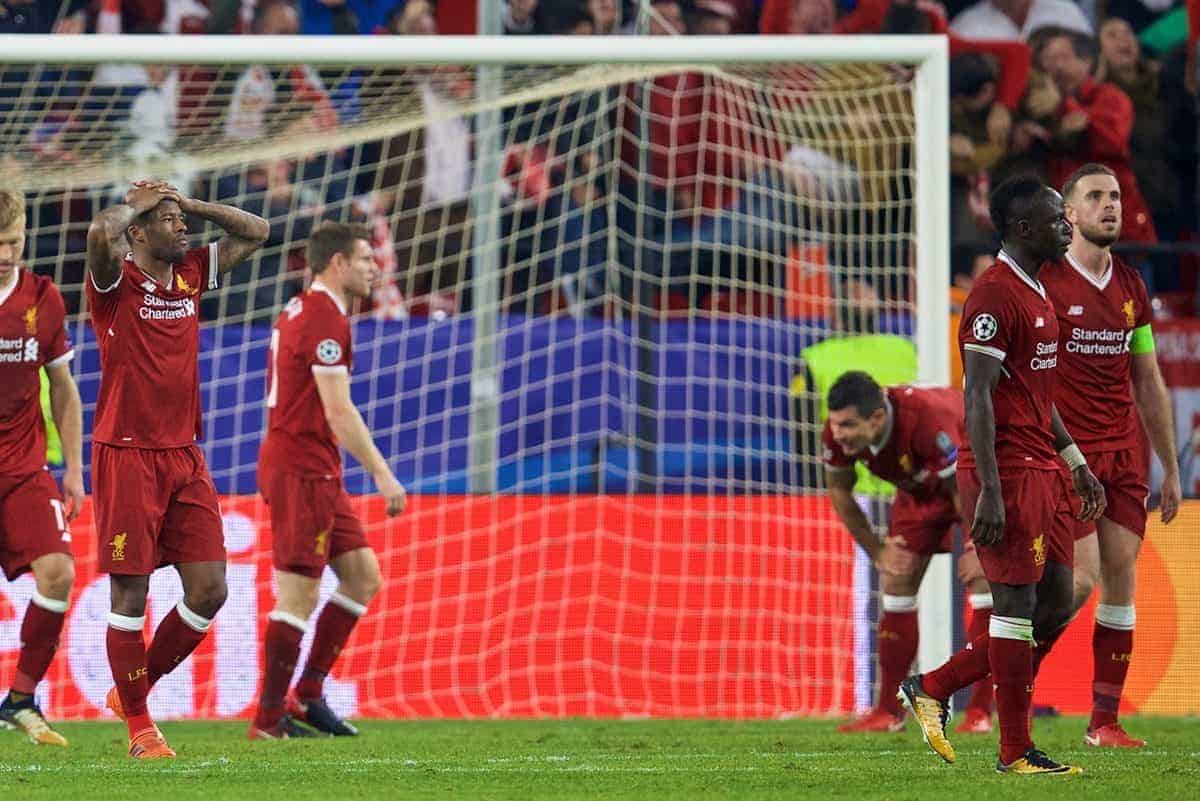 Jamie Carragher was left seething after Liverpool allowed a commanding lead out of their grasp as they drew 3-3 away to Sevilla on Tuesday night.

The Reds were three goals up at half-time in Andalusia, but a second-half display littered with errors, both individual and collective, allowed the home side back in.

Roberto Firmino‘s brace was cancelled out by a double from Wissam Ben Yedder, while Sadio Mane‘s diving header was matched by Guido Pizarro’s late blast.

This draw leaves Liverpool needing a point from their final game of Group E at home to Spartak Moscow to guarantee their place in the last 16 of the Champions League.

And speaking to Viasport Football after the game, ex-Reds centre-back Carragher was highly critical of their defensive collapse.

“Well it was a shambles, and thankfully I’m not allowed to swear also, because I’d like to swear when I see that second half!” he said.

“The big question going into this game [was] could Liverpool’s defence cope with the atmosphere and the players of Sevilla—we know they have a great record.

“And I felt before the game the answer would be ‘no’, but I didn’t think it would be as bad as this, especially in the second half.

“I didn’t see Liverpool keeping a clean sheet, but to be 3-0 up and to seeing how Liverpool gave the goals away, and the actual game intelligence, it was like watching children play.

“At Sevilla, you have to quieten the crowd. Liverpool did that by scoring goals in the first half.

“In the second half Sevilla came flying out, [Liverpool were] giving stupid free-kicks away that lift the crowd, lift the players, get the referee giving yellow cards.

“And that’s what Liverpool continually did. Two of the goals came from set-pieces, and another [one] from a foul they give away in the box from Alberto Moreno.

“It’s unbelievable to see a decision like that from a player at Champions League level. It was like watching children in the second half.”

Carragher was particularly incensed with the performance of Alberto Moreno, whose pair of quick-fire errors allowed his former side to claw back into the game.

The 39-year-old believes that, despite Moreno’s improvement in form this season, the Spaniard is still a ticking time bomb at the back.

“He’s had a lot of credit this season because he’s performed a lot better than he has done,” he continued.

“But he’s been at the club now for three or four years, and I don’t think a run of seven, eight games should cloud people’s judgement, of what you think of him as a player.

“I still think Liverpool need a left-back. He has done a lot better this season but he still has those moments where he makes rash decisions and rash tackles.

“And I don’t think that will ever go out of his game.

“It was actually a very good decision by Klopp to bring James Milner on, because at that stage I thought Liverpool were going to lose the game, never mind draw.

“To be fair he has done well, we haven’t seen that a lot this season, but again it goes back to the Moreno we’ve seen for the last three or four years.”