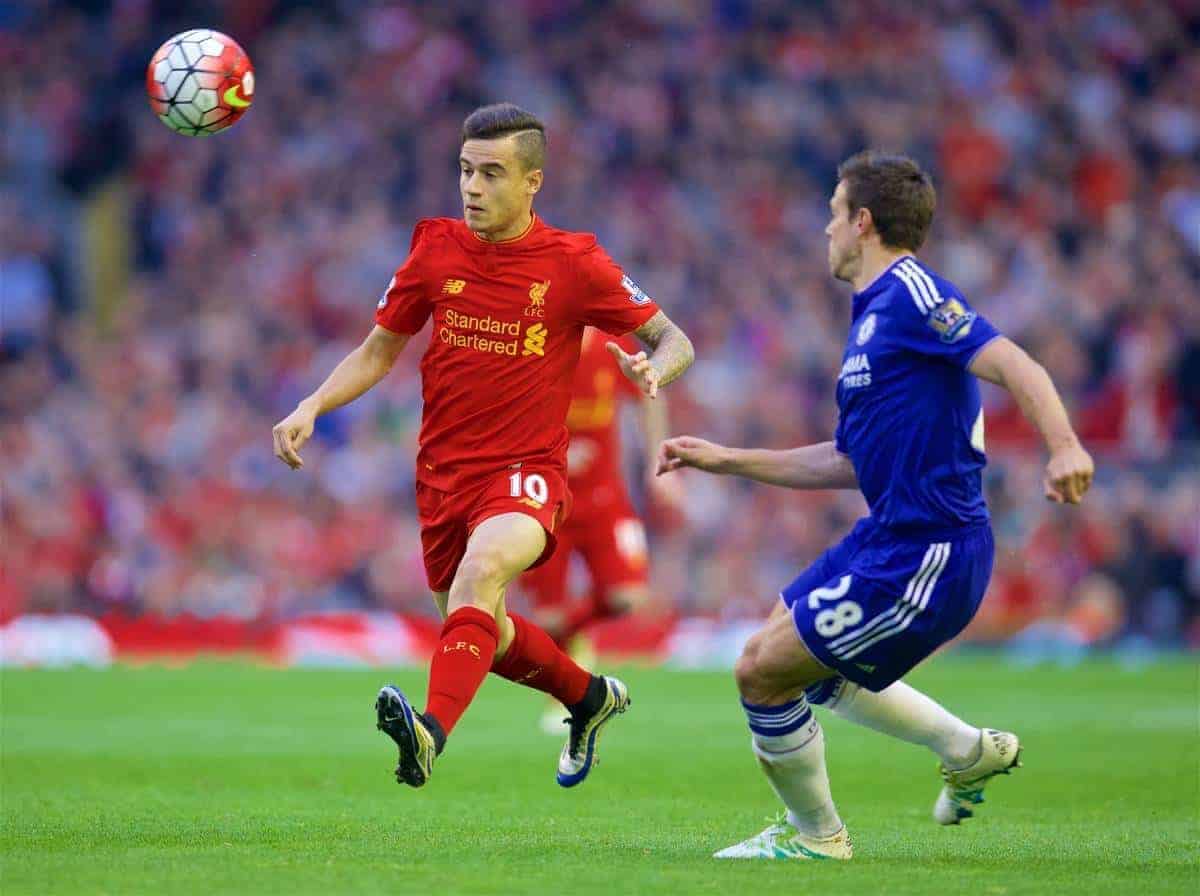 Liverpool host Chelsea at Anfield on Saturday for the 75th time, having won 46 of the previous home encounters against the Blues – but none since 2012.

Last season at Anfield the teams played out a 1-1 draw. David Luiz with a free kick gave the Londoners a half-time lead but Gini Wijnaldum equalised on 57 minutes. Chelsea had the chance to win the game but Simon Mignolet saved a Diego Costa penalty 13 minutes from time.

It was the Belgian ‘keeper’s sixth save from 14 Premier League penalties. He has since added to his tally by keeping out a spot-kick from Leicester‘s Jamie Vardy. In the earlier Stamford Bridge clash Dejan Lovren scored his first league goal for the Reds and Jordan Henderson netted his only goal of last season as Liverpool won 2-1.

There have been 50 Premier League meeting between the clubs with both teams having won 19 times.

At Anfield Liverpool have won 13, drawn 6 and lost 6 Premier League clashes with the Blues.

The Reds are unbeaten in the last 5 league games against Chelsea home and away (2 wins and 3 draws). Their best in the Premier League era is 6 which they set between 1994-96 and again from 2010-13. Patrik Berger scored Liverpool’s last hat trick against Chelsea at Anfield in October 1997 in a 4-2 win. He is one of 4 Reds hat-trick scorers in the league against the Londoners. The others were James Stewart in 1910, Fred Pagnam (1915) and Gordon Hodgson (1930).

Liverpool have not beaten Chelsea at Anfield in the league since May 2012 when they recorded a 4-1 victory. Only Jordan Henderson of the 18-man squad that night is still at the club. Since then the Reds have drawn 3 and lost twice.

In all competitions Liverpool have not kept a clean sheet against Chelsea in 14 games since winning 2-0 in a League Cup tie in London in November 2011.

The last 2 Anfield league clashes have ended 1-1 (as did the League Cup Semi-Final meeting in January 2015).

Daniel Sturridge played 63 games in the league scoring 13 times while at Chelsea before his move to Liverpool. In all matches he found the net 24 times in 96 appearances.

Mo Salah played 19 times for today’s visitors, scoring twice. Both his goals and 13 of the appearances came in the Premier League.

Dominic Solanke‘s first team career at Chelsea lasted 17 minutes. His sole appearance came as a substitute against Maribor in the Champions League in October 2014.

Liverpool have won the last 3 league games by a 3 goal margin. Not since March 2014 had they accomplished the feat. A repeat today would see it happen 4 times in a row for the first time since the autumn of 1987.

The Reds last scored 3 or more goals in 4 consecutive league games during a sequence (February – March 2014) which lasted 6 matches.

19 of Liverpool’s 46 goals this season in all games have been scored in the opening half-hour.