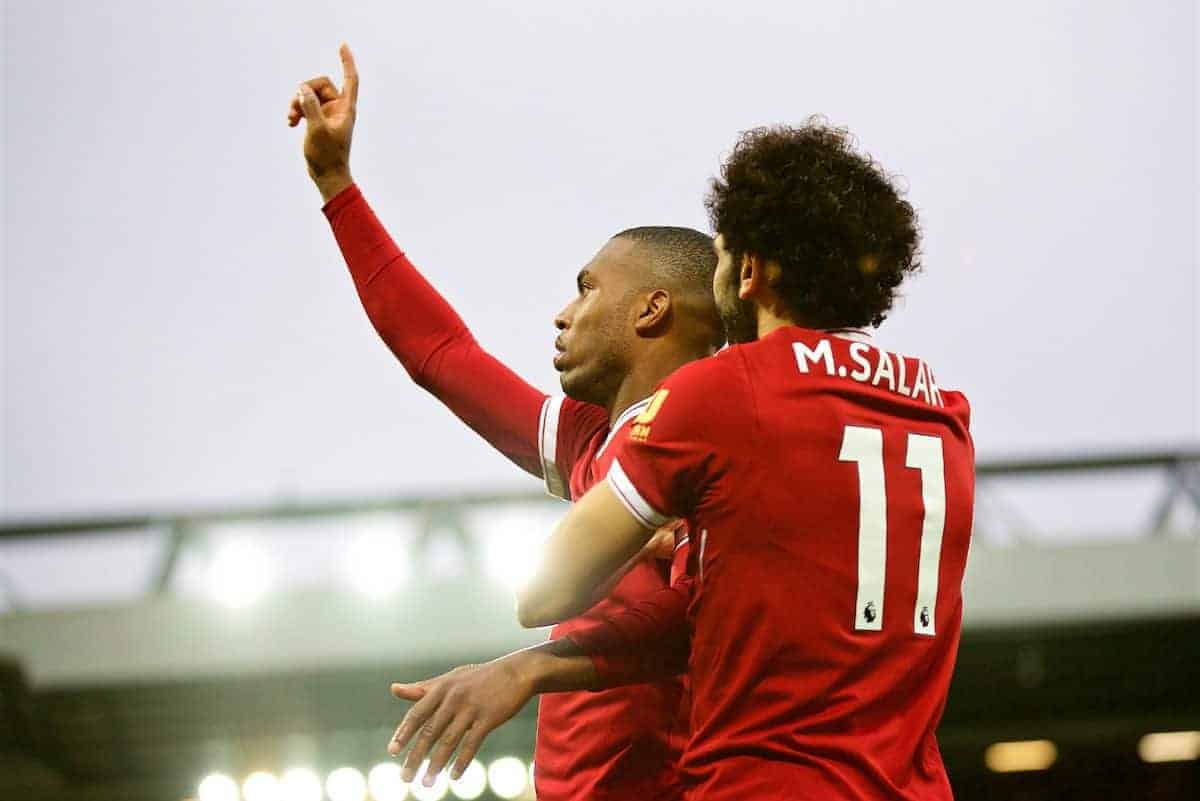 Jurgen Klopp’s selection against West Ham is straightforward, but he has an interesting decision in starting Alex Oxlade-Chamberlain or Daniel Sturridge.

The Reds arrive at the London Stadium with the aim of securing a third straight win to conclude what would be an excellent week.

After successive 3-0 wins at Anfield, Klopp’s side will be confident of ensuring the second trip to the Hammers’ new home proves as successful as the first winning visit six months ago.

It’s vital Liverpool do just that, with the chance to capitalise on top-six rivals dropping points as Man City host Arsenal and Chelsea face Man United.

Klopp is set to stick closely to the winning team of recent games, and with Jordan Henderson in line to replace the doubtful Gini Wijnaldum, it’s a straight choice between Oxlade-Chamberlain and Sturridge for a start in attack.

Mounting injuries and the unlikely readiness of those returning to play from the start will force Klopp to stick closely to the winning team of the last two games.

Indeed, selection is straightforward for the boss, who will reintroduce Mignolet and inject an element of freshness into a couple of areas of the team.

One of these is sure to come in defence, where Gomez is likely to return at right-back, with Alberto Moreno and the functioning central pair of Joel Matip and Ragnar Klavan all set to continue.

The Reds’ midfield hinges on Wijnaldum’s availability, but given Klopp said he is still suffering pain, it’s unlikely the Dutchman will feature to avoid worsening the problem.

The central trio therefore picks itself, with Henderson returning to his holding role supporting Emre Can and James Milner—and all three will hope for a better outing than the last time they formed a midfield in a London away game.

Klopp’s most interesting call comes in attack, where Oxlade-Chamberlain and Sturridge are fighting to be the man to join Mohamed Salah and Roberto Firmino.

Given the positive way things worked against Maribor, Klopp could retain Oxlade-Chamberlain’s greater pace and directness in the team, holding Sturridge as an impact sub. Though the squad has been boosted by returning absentees, there’s little room for manoeuvre with the starting XI.

Recent wins and Klopp’s reluctance to heavily rotate ensures this isn’t an issue anyway, but the boss could opt for the opposite approach to that discussed above in attack.

Sturridge’s goalscoring form in his last two outings could and perhaps should earn him a starting role sandwiched between Firmino—who will move to the left—and Salah.

This would see Oxlade-Chamberlain—perhaps harshly—drop to the bench, with Klopp having recently said the summer signing will need more time to learn the workings of a central role.

But with the clinical edge a fully fit and firing Sturridge could provide at the London Stadium and in the long run, it would absolutely be worth giving the 28-year-old a chance to continue building form.

Oxlade-Chamberlain would provide another strong option to introduce along with Sadio Mane, who Kopites will be desperate to see make the “20 to 25 minute” cameo Klopp suggested could happen. The Reds have responded brilliantly to defeat at Tottenham collecting back-to-back wins, and Saturday presents an ideal chance for Klopp’s men to extend that run—one which they must take.