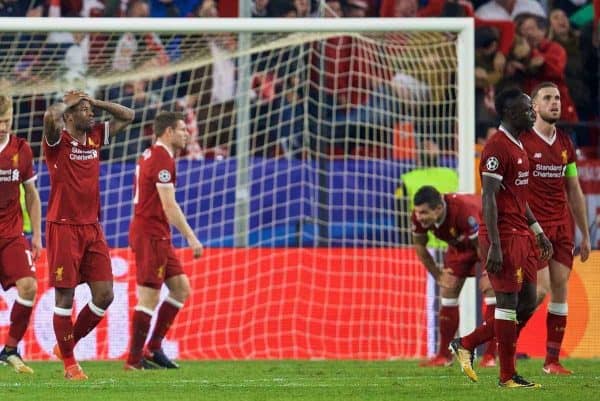 Liverpool blew a three-goal half-tiime lead to draw 3-3 with Sevilla on Tuesday night, and Reds supporters were left furious after a spineless second-half performance.

Roberto Firmino got Liverpool off to a perfect start with just 88 seconds played, and Sadio Mane‘s sublime header made it 2-0 shortly after.

Firmino’s second of the night made it three before the interval, and it looked as though Jurgen Klopp‘s were cruising towards Champions League knockout stage qualification.

However, Sevilla produced a spirited comeback with two Ben Yedder goals, with plenty of help from Alberto Moreno, made it 3-2.

Just as it looked as though Liverpool had held on, Guido Pizarro equalised in the 93rd minute to earn the hosts the most unlikely point.

Here’s how supporters reacted to Liverpool’s draw against the La Liga outfit on Facebook, Twitter and our forums.

Klopp made just one change to the side that beat Southampton 3-0 on Saturday, with Emre Can once again left on the substitutes’ bench……

Emre is done at LFC.

When Emre Can is left out, the reaction from his admirers is bordering on hysterical.

“Aggressive by Klopp. I thought Can would come in to add some muscle in midfield away from home. But looks like Klopp is going for it.”

– Peter Roberts on our forums

That's 4 goals from corners we've scored in the past 5 games now.

Loris Karius made a superb save to deny former Man City winger Nolito, and supporters were left impressed……

Mane doubled the lead, as Liverpool scored from a corner yet again. It hasn’t been their strong point for a long time……

Liverpool have scored from a corner again. Surreal.

“2 goals from a corner. Thought I was watching Liverpool?”

#LFC 3-0 up in Seville inside half an hour. Firmino again. Remarkable stuff. Sevilla just can't handle the pace of that front line

Ben Yedder pulled a goal back, and supporters were left unimpressed by the foul Moreno committed in the lead-up to the goal……

MORENO will always be a clown #LFC

Not having the Moreno hype

Ah. The Moreno self-destruct button is back. Pointless free kick, then fail to defend it. #SEVLIV

Moreno then conceded a penalty which Ben Yedder scored, as the Spaniard lost his head at his former ground……

Christ. Just get him off.

What a mess this is. Heads have gone, not just Moreno's. No game management being shown.

Fair to say the Moreno haters will be out in full force tonight. He’s had a mare. Still had a great season prior to tonight, though. #LFC

Pizarro’s late strike caused much anger, as Liverpool threw away two points in rather pathetic fashion……

We'll still finish top of the group, but what a shocker of a second-half that was. Every single one of those players culpable. A complete lack of game management.

I hate them all of them

Well I hope there's some serious arse kicking going on in the Reds' dressing room. That second half capitulation is unforgivable. 3 entirely preventable goals. Shocker!

“Feels like a loss this. Can’t believe how naive we were in the second half. Didn’t calm it all down and encouraged them to come on. Kept Moreno on too long and stopped pressing in midfield.”

– theres always tomorrow on our forums.

Absolutely spineless performance from Henderson today, really disappointing, especially for the captain on the side.

The impression remains that as much, if not more than, a central defender (or two), Liverpool could do with a midfielder who doesn’t solve problems by running at them.

Only good when the going is good this team

The worst thing is that none of us are even shocked. These Reds la. pic.twitter.com/wA2QY5cpPR