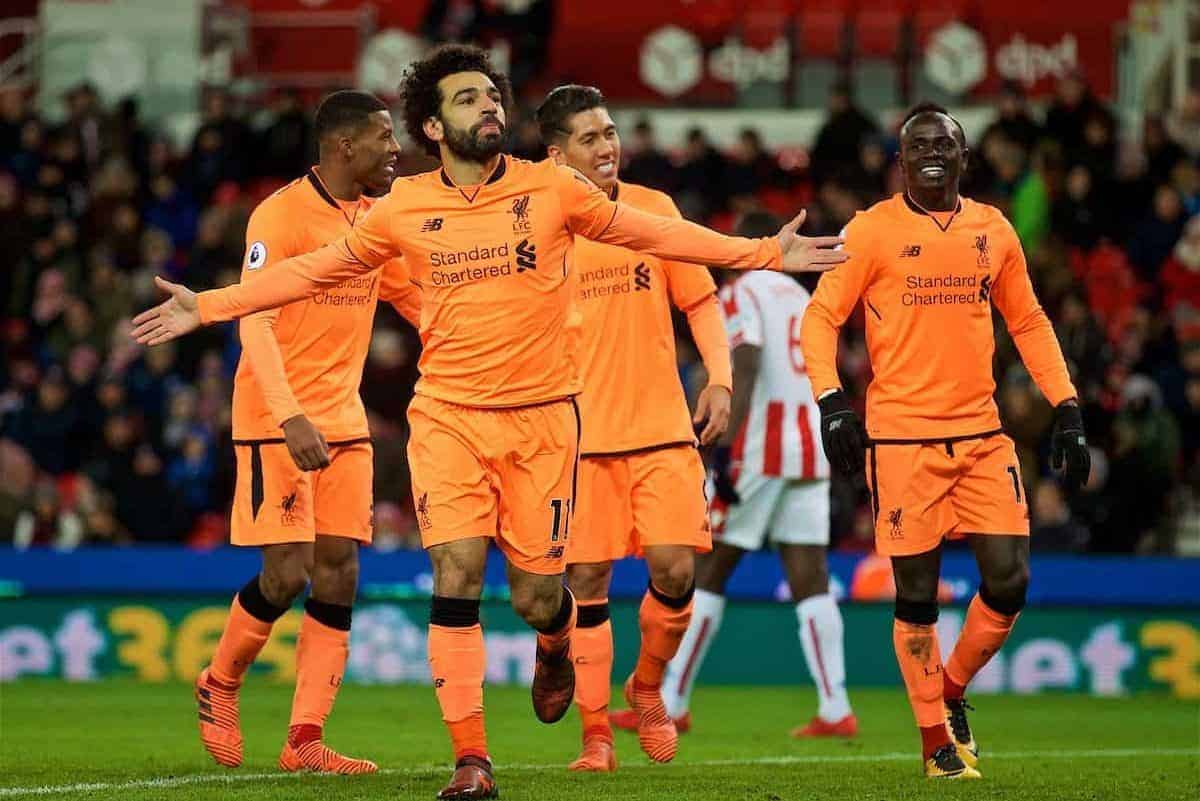 Mohamed Salah played a starring role off the substitutes’ bench as Liverpool sealed a comfortable 3-0 win away to Stoke City on Wednesday night.

The Reds took to the bet365 Stadium looking to respond with a victory after squandering leads in their last two outings against Sevilla and Chelsea.

Having not lost since their 4-1 defeat to Tottenham at Wembley towards the end of October, Jurgen Klopp‘s side made their way down the M6 confident of another strong performance.

And the German fielded a formidable lineup in Staffordshire, despite making six changes to the side that produced a comprehensive display against the champions on Saturday evening.

Having won each of their last four games against Stoke, the Reds had history on their side on Wednesday night, and ultimately made light work of the Potters. The Reds contested a scrappy start in Stoke, as with Mark Hughes deploying Peter Crouch as his lone striker the home side opted for a more direct approach.

Klopp’s side lined up in the 4-4-2 shape from November’s 4-1 win away to West Ham, with Alex Oxlade-Chamberlain and Sadio Mane manning the flanks and Roberto Firmino and Dominic Solanke up top.

Liverpool were forced to feed off scraps in the early stages, but Mane made it count when Solanke’s flick landed in his path in the six-yard box, chipping Lee Grant to make it 1-0.

Oxlade-Chamberlain drew a save from Grant with a low drilled effort on the half-hour mark, with the goalkeeper claiming the ball at the second attempt with Solanke bearing down on him.

Solanke and Firmino produced a smart opening with a pair of backheels, but the youngster failed to trouble Grant with his placed effort, before chaos ensued at the other end.

With Mame Biram Diouf racing towards goal, Simon Mignolet rushed out and brought the Senegalese down with a rough challenge, but was given a let-off with just a yellow card and a missed free-kick from Xherdan Shaqiri.

As half-time approached, an excellent through ball from Solanke sent Mane through, but the 25-year-old struck the post despite being one-on-one with Grant. Stoke began the second half on the front foot, looking to force an equaliser, and ex-Reds midfielder Joe Allen almost found it as his half-volley curled just wide of the post.

Liverpool were back on top shortly after, however, and Oxlade-Chamberlain came close to crafting their second as his surged to the byline and cut back, but Joel Matip was unable to get the shot off.

After resting Salah following his excellent game against Chelsea on Saturday, Klopp opted to introduce the Egyptian with 23 minutes left to play, with James Milner also coming on.

Allen had another fine opportunity soon after, with the Welshman somehow blazing over from Crouch’s knockdown with the goal gaping.

But Liverpool’s quality shone through as Mane bamboozled Ryan Shawcross heading into the box, sending a teasing cross towards Salah who volleyed home a fierce effort to ensure a two-goal lead.

And Salah made it 3-0 after chasing down a long ball, beating Grant for his 17th goal of the season in just 21 appearances.