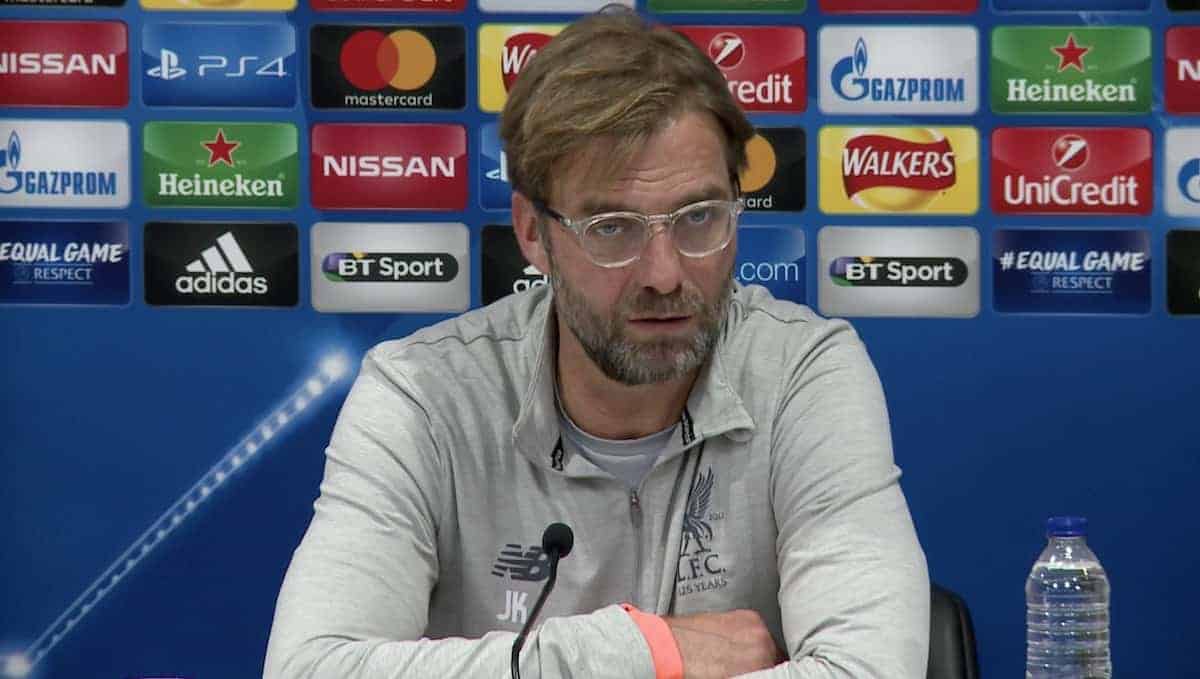 Jurgen Klopp was in good spirits after Liverpool’s 3-0 win over Maribor in the Champions League on Wednesday evening.

It was far from a classic European night at Anfield, but the Reds got the job done in solid fashion against a very defence-minded opponent.

After a goalless opening 45 minutes, Mohamed Salah scored his 10th of the season with a clever finish, before Emre Can‘s superb effort finished off a lovely move.

Daniel Sturridge got his first Champions League goal for seven years with a late strike, as Klopp’s men eased to victory.

Speaking to reporters after the game, Klopp was content with his team’s display.

“The first-half was not the most exciting football. Roberto [Firmino] tried everything, was very lively,” he said.

“Again, similar to last time (against Huddersfield Town), we told the boys at half-time to remain patient.

“Second half – fantastic goal (by Mohamed Salah), good timing, good cross. The second goal was fantastic play, speeding up in a small space.

“I’m pleased with the result. It wasn’t our best game but it’s three points.”

The manager didn’t seem too confident about Gini Wijnaldum‘s injury, after the Dutchman was forced off in the first-half, and he touched upon his side’s penalty woes in a jokey manner.

“I saw him at half-time and the ankle was already swollen. It’s probably not a good sign,” he added.

“Of course, we don’t like this (the missed penalties). The penalty today was a really good, it was a fantastic save.

“We will find a player!”

Finally, Klopp praised the performance of Alex Oxlade-Chamberlain, making just his second start for the Reds, and admitted injuries to key attacking players is holding the team back a little.

“Missing players like Mane, Coutinho, Lallana – and Wijnaldum – does not make it easy (to break teams down) but we are well equipped,” he said.

“He (Oxlade-Chamberlain) offered a lot in the first half. A lot of good things, I’m fine with the performance”

Attention now turns to Saturday’s trip to West Ham in the Premier League, as Liverpool look to go into the international break in style.