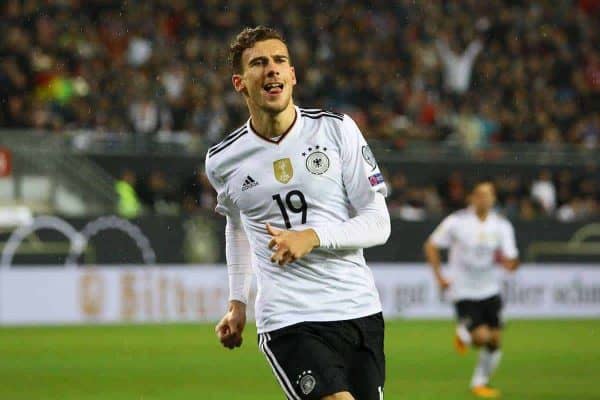 Liverpool have been touted with interest in six big-name players from around Europe, with Jurgen Klopp looking to build on the signing of Virgil van Dijk.

The Reds broke both their transfer record and the world record for a defender when they confirmed a £75 million deal to bring Van Dijk to Anfield from Southampton on Wednesday.

Van Dijk arrives as Klopp’s first addition of the January transfer window, and will link up with his new team-mates on New Year’s Day.

Having surpassed the £55 million paid to sign Naby Keita from RB Leipzig, Van Dijk’s move serves as a major statement of intent from Klopp’s Reds.

But according to Goal‘s Melissa Reddy, this is unlikely to be the last of the big-money business for Liverpool, with Klopp “still intent on fortifying.”

Firstly, with Emre Can increasingly likely to depart on a free transfer next summer, and with Juventus and Borussia Dortmund both interested, Klopp has earmarked two possible replacements.

Schalke’s Leon Goretzka is believed to be on the Reds’ radar, and with his contract set to expire in 2018 could arrive in a similar deal to Can.

A more costly alternative is Lazio’s Sergej Milinkovic-Savic, with the Serie A side “reluctant to let him leave,” and “expecting a fee of around £90 million if he does.”

Elsewhere, a more progressive option in the middle of the park, with the versatility required to operate on the flanks and more advanced in attack too, is Monaco’s Thomas Lemar.

Liverpool failed with a bid in the region of £70 million for the 22-year-old in August, and his club are “insisting he is not on the market next month.”

But, interestingly, Reddy suggests that “if they scale back their £92 million valuation of the Frenchman in the off-season, he should remain in the mix” for the Reds.

And while Van Dijk’s move to Merseyside will significantly bolster Klopp’s centre-back ranks, three other defensive options are said to be under consideration.

Namely, these are Basel’s Manuel Akanji—who has previously been named as a target by the Indepedent‘s Simon Hughes—Atletico Madrid’s Jose Gimenez and Athletic Bilbao’s Aymeric Laporte.

It could well be, therefore, that Klopp is seeking a partner for Van Dijk in the future, rather than fielding him alongside any of Joel Matip, Dejan Lovren or Ragnar Klavan as his long-term duo.

Finally, Reddy claims that “there is also a decision to be made in the goalkeeping department,” due to uncertainty over the performances of Simon Mignolet and Loris Karius.

While that is likely based more on speculation than fact, it seems that Liverpool will be very active in the months to come.