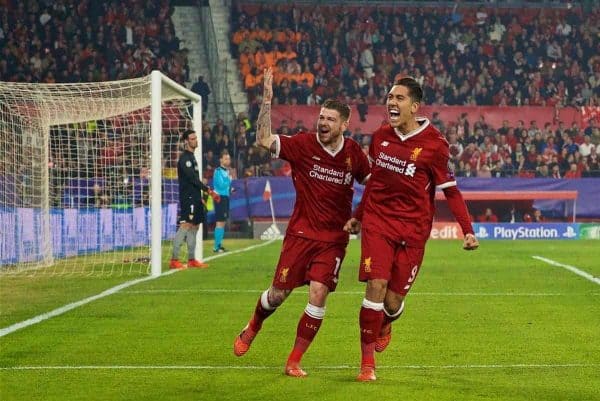 Liverpool require at least a point to reach the Champions League knockout stage on Wednesday evening, as Spartak Moscow make the trip to Anfield.

It has been a very pleasing return to form for the Reds, who have now lost just once in their last 14 matches in all competitions.

Five victories out of six have been rattled off in the Premier League, and there is an increasing feeling that Liverpool’s season is clicking nicely into gear.

League commitments make way for European excursions in midweek, as Jurgen Klopp‘s side face a potentially nervy night on Merseyside.

On paper, the Reds should have too much for their opponents, and a point would still be enough to qualify for the last 16, but they have a history of doing things the hard way.

Liverpool were the much better team in the return fixture in late September, despite somehow only drawing 1-1, and a similar attacking performance on Wednesday will surely be enough to progress.

Getting all three points is important in its own right, however, with Sevilla just one adrift in second place in Group E.

Finishing top of the group could make such a difference when it comes to finding out who Liverpool face in the next round, ahead of next Monday’s draw.

Confidence is high, attacking players are on fire and the general feeling around the club is positive—it would be heartbreaking to see Klopp’s men make a mess of this.

Joel Matip is still missing with the muscle injury that kept him out of the Brighton match, and Adam Lallana is not yet ready for a return. Nathaniel Clyne‘s absence will continue into 2018.

Klopp has an otherwise fit squad to choose from, and he is likely to rotate again, especially with the Merseyside derby at home to Everton on Sunday.

Sadio Mane should come back into the side, having not featured at the Amex Stadium, and Alex Oxlade-Chamberlain will also hope for a start.

Klopp will be wary of taking Spartak too lightly, however, so expect a strong team to be fielded.

It will be interesting to see if Emre Can and Gini Wijnaldum are once again used in a back three—it is more likely that Joe Gomez or Ragnar Klavan will slot in, having recovered from illness.

The visitors are without cruciate ligament injury victims Artem Timofeev and Georgi Tigiev, while Jano Ananidze and Dmitri Kombarov are also out.

Roberto Firmino will hope to score his 12th goal of the season on Wednesday night, equalling his best-ever tally for the Reds in a campaign.

In his pre-match press conference, Klopp described his side’s upcoming clash as “the game”:

“Tomorrow is a very important match for us. I don’t want to make it bigger than it is but it is very big,” he said.

“With all the things around, with all the excitement and uncertainty before a game, and all the opportunities in the game, I am really happy about this opportunity.

“[It is] the game—it’s the game because we are only part of the Champions League because we want to go to the next round.”

The match is part of BT Sport’s Champions League coverage, with BT Sport 2 showing the game from 7pm (GMT). Kickoff is at 7.45pm.

Our new-look live blog will also be available from 7pm, with Karl Matchett providing minute-by-minute updates during the match.