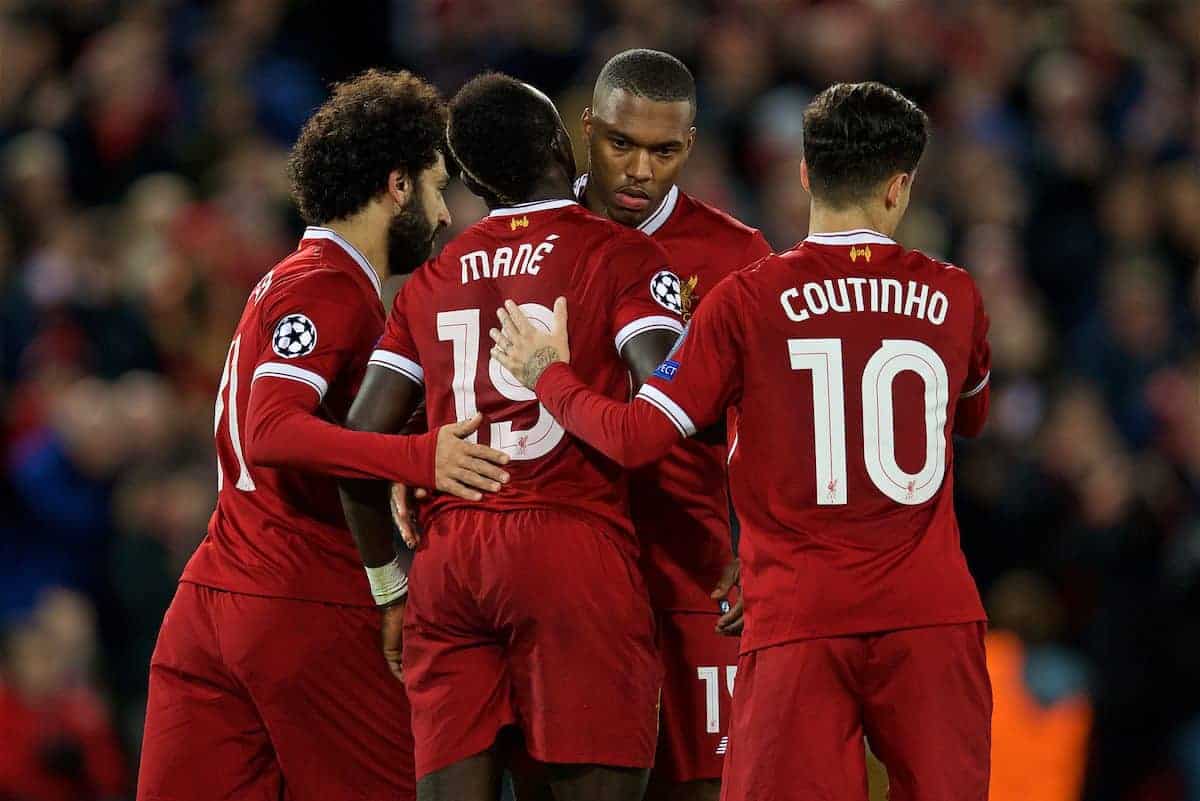 Liverpool’s fearsome foursome put Spartak Moscow to the sword and sent shockwaves across the Champions League with a convincing 7-0 win.

7th Heaven For the Fab Four

There’s always a sense of anticipation when the names Roberto Firmino, Sadio Mane, Mohamed Salah and Philippe Coutinho are together on a Liverpool teamsheet.

At Anfield they lined up in an attacking foursome with two holding midfielders behind for insurance, and this allowed them to run riot.

Coutinho, captain for the night, was immense, but the whole dynamic of the front four produced an unstoppable force which Spartak failed to contain.

At times the 4-4-2 formation was almost 4-2-3-1 with Firmino dropping back, taking up some of the playmaking duties alongside Coutinho, and this combination of guile and speed set the side off for their relentless attacking display.

The damage these players can do was epitomised in Liverpool’s second goal during which all played vital parts with Coutinho eventually finding the net.

When Salah coolly finished a chance with five minutes to go, it meant all four were on the scoresheet, and rounded off a night of forward-thinking football which sees Liverpool qualify for the last 16 in style.

A Captain’s Knock From Coutinho

Coutinho has captained Brazil in the past as part of their manager Tite’s policy of rotating the armband, but there was no question that the No. 10 was Liverpool’s captain on merit and it was not a random selection.

He led the team by example, stepping up to take an early penalty and sending the Spartak goalkeeper the wrong way to open the scoring.

From then on the floodgates opened, and Coutinho was able to control the game from the left side of midfield, getting on the scoresheet again shortly after his first to finish off an excellent attacking move.

His third came via a deflection, and completed a hat-trick which merely accentuated his all-round display.

His work in the buildup for his third goal, jinking past a number of opposition players and displaying great balance before playing a one-two with Firmino, was the magical Brazilian at his best.

Is This Liverpool’s Best XI?

Jurgen Klopp‘s team selection led to suggestions that this XI was his best lineup.

Some may prefer different faces in the centre of defence, and Joel Matip is widely considered the club’s best centre-back, but aside from this the team looked like Liverpool’s strongest, at least on paper.

The double pivot of Emre Can and Georginio Wijnaldum works better than any other midfield combination, the front four speaks for itself and at full-back Joe Gomez and Alberto Moreno have proven that they are the go-to players in these positions, even though they might not have been suggested as such before this season.

The result also supports this idea. Seven goals and a clean sheet against a side who had only lost one game in the group stage previously, and who Liverpool had only managed to draw with on the opening matchday.

There are likely to be changes for the Merseyside derby at the weekend as the likes of Jordan Henderson, Daniel Sturridge, and Alex Oxlade-Chamberlain will all be hoping for starts.

But next time the club take to the field in Europe, they’d do well to stick with the team which started on Wednesday night.

A Clean Sheet to Boot Liverpool’s problem in previous games has been that their attack has been let down by their defence.

This wasn’t the case tonight, as the back four of Gomez, Dejan Lovren, Ragnar Klavan, and Moreno provided a solid base with help from Can and Wijnaldum in front of them.

The midfield duo should be lumped into this praise as they were positionally disciplined and helped both full-backs and centre-backs with their defensive duties.

And Loris Karius, despite one questionable decision to come out of his area to deal with something Gomez already had under control, was generally solid.

Spartak only had four fewer shots than Liverpool, and Liverpool’s Champions League goalkeeper dealt with any which happened to be on target with minimal fuss.

Lovren looks a lot more comfortable on the right side of defence, and Klavan is the most natural left-sided defender currently at the club.

This unit may not be the answer going forward, but at least for the moment they are showing signs that some of the past errors may be being eradicated thanks to a change in system and some individual improvements in defence.

Up There With Europe’s Best

Where next in Europe?

Some big teams lie in wait for the Reds in the next round, but many clubs across the continent will have picked up on this result and not fancy meeting Klopp’s side in the last 16 or beyond.

Liverpool are now one of the clubs the rest will be looking to avoid as they plan their respective paths to the final.

Klopp now appears to be creating a side which appears to be getting closer to the level of performance he once had with his Borussia Dortmund side.

They’re not quite there yet, but reaching the Champions League knockout rounds for the first time since 2009 is a big step.

And the manner in which they did it should have fans excited for the future, and opposition sides worried.