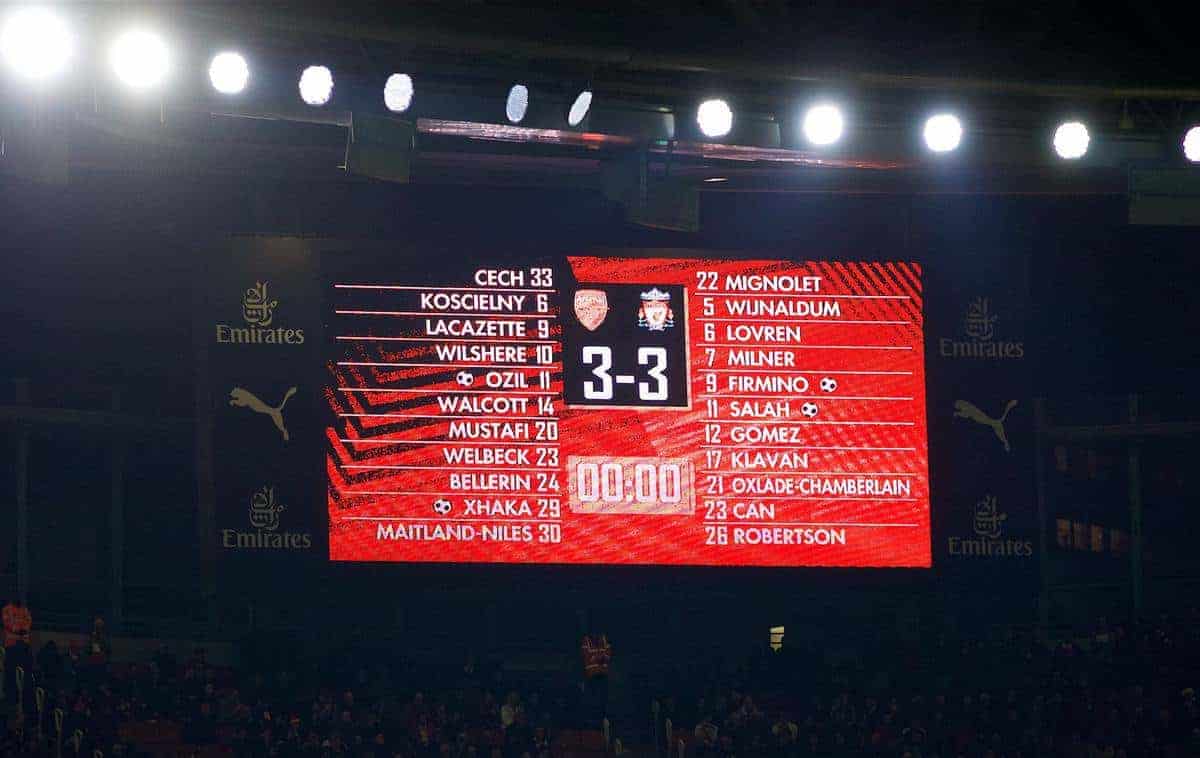 What was expected to be an absolute humdinger of a contest at the Emirates lived up to expectation as the Reds played out an incredible draw with the Gunners.

Remarkably it was 3-3 on 70 minutes after Roberto Firmino’s shot looped in to set up a grand slam final 20 minutes, but both sides had to settle for a share of the points.

Here’s how Kopites reacted to the entertaining stalemate on social media and across our forums.

Fans bemoaned the costly missed chances in the first half, and were particularly disappointed with Mane…

Full Time 3-3
How on earth we have not won that game, well only the forwards would know, too many missed chances, Migs very poor with that 2nd Arsenal goal. Before the match a draw is not bad, but after leading 2-0 is very disappointing indeed. Night all #YNWA

So many wasted chances again, would've taken a draw before the game. But to fuck up a 2-0 in 6 minutes is unreal. I imagine Karius will be in net for the upcoming games

“Missed too many chances and mistakes cost us feel sorry for Lovren & Klavan who played well.”

“Could have won 5-0…. wasteful in front of goal, useless keeper, lost concentration due to over confidence and then panicked! Useless…”
– lfceddie on the forums

Mane wasn't happy being subbed on 80mins but he was lucky wasn't subbed much earlier. Constantly lost the ball chasing his 1st touch. Sadio being Sadio will always be dangerous which is probably why Klopp kept him on.

“We really should have put the game beyond Arsenal in the first half. We were too profligate. Mane looks seriously out of form.”

– Fullmetal on the forums

Kopites were infuriated by the second-half defensive collapse, criticising the lack of maturity in performance and Mignolet’s part in it…

Inability to manage games where they are clearly the better side has cost Liverpool yet again. Question of character not just personnel. Not a million miles off being unplayable this side, though.

Fed the fuck up with having to settle for a point from games we have dominated. This was never going to be dull but losing 3 goals in 5 minutes, 30 seconds after going 2-0 up, is just a big pile of unacceptable shite, gutted #LFC

Yes the attack missed chances but they scored 3 goals. Should be enough to win any game. The defence (& i include midfield protection & team in general) conceding 3 when we were in apparent total control is our achiles heel.

A great point without context but another example of how this side is unable to control games when the opposition mount a sustained period of pressure. #LFC

Feel for our centre halves tonight. Terrific but let down by full backs and goalkeeper

Liverpool need to sign a goalkeeper. Clearly a centre back or two. Clearly a better defensive-minded midfielder. But most of all, the club needs to sign a captain. ASAP.

There was mixed feelings on the overall result…

Dear God that was a ridiculous football match to watch. I think I'm happy with a point. I think. I can't work it out to be honest. Wild.

An absolute bonkers, and at times, comical, way to get what is actually a pretty good result. These Reds la.

Like watching England’s cricket team, a great session ruined by a batting collapse.
Need to sort out the capitulation, but we are still boss at footy!!!

A draw is not the end of the world but it feels like a loss, we really fucked that up

Individual mistakes cost us again. We showed bottle to get back into the game. The same mistakes. Point gained rather than 3 lost.

Don't know what I'm supposed to be feeling??

That was mad but a draw at Arsenal is a decent result. Could have been much more but I'd have taken it at 3-2 because they were all over us at that stage.