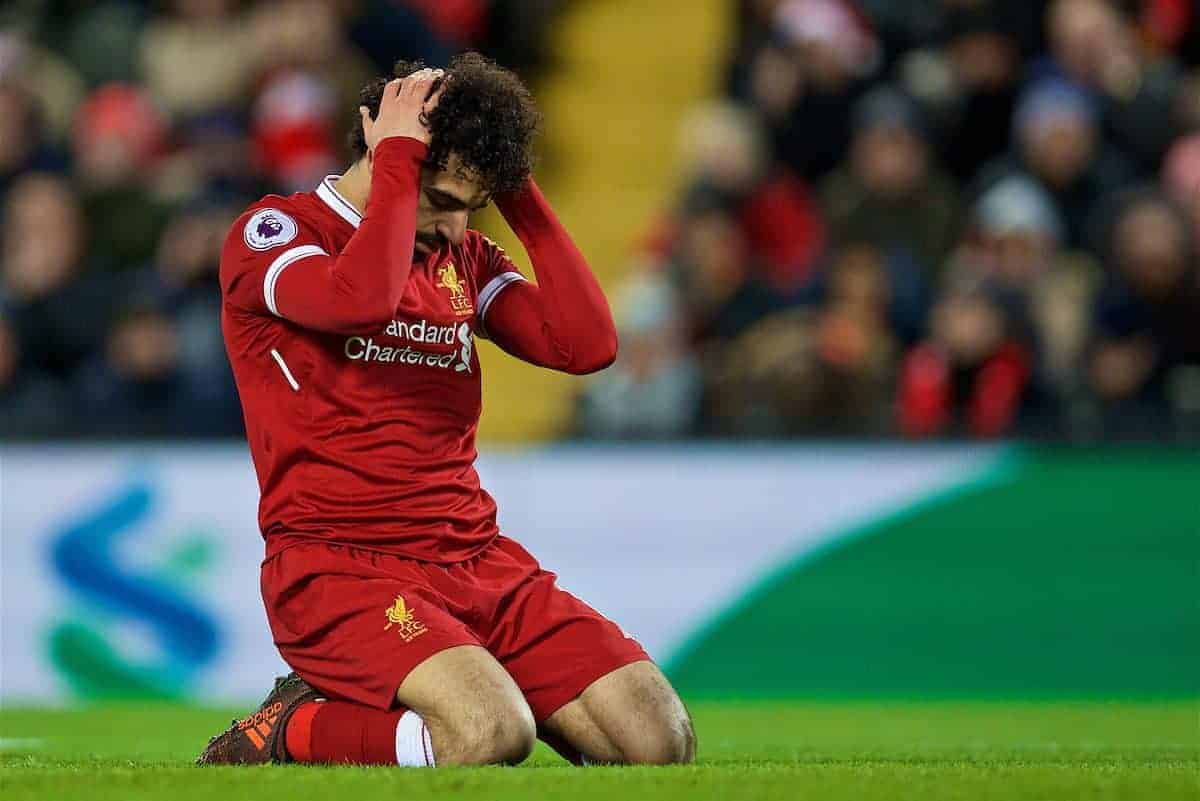 Liverpool once again found their fortunes in the hands of the officials as they were held to a frustrating 0-0 draw at home to West Brom on Wednesday.

The frustrations of Sunday’s 1-1 draw in the Merseyside derby couldn’t rest long, with Liverpool back in action just three days later, taking on West Brom at Anfield.

Left ruing their late concession to Everton, the Reds headed into their midweek clash amid a paradoxical, flattened mood, with a 10-game unbeaten run undermined by the manner of their last result.

But as their busy festive period continued Klopp’s side kept their focus on the task at hand, and the German continued to rotate his selection, making six changes to his starting lineup.

The inclusion of Philippe Coutinho and Roberto Firmino gave the Reds further quality in the final third, but they couldn’t make it count.

With the Baggies sitting back, Alan Pardew no doubt having analysed Everton‘s frustrating setup on Sunday, Liverpool struggled to carve open the visitors’ defence in the early stages.

Their first real chance came on 17 minutes, with Mohamed Salah floating the ball towards the back post for an onrushing Firmino, whose effort just squeezed wide.

West Brom began to gain a foothold with a series of set-pieces, but Loris Karius dealt well with lofted balls into the box, though Hal Robson-Kanu did hit the bar with a curling effort.

At the other end, Coutinho twisted into space and fired a long-range effort low into the clutches of Ben Foster.

Salah had a similar chance to Firmino as the first half drew to close, but the winger couldn’t stretch far enough to get on the end Trent Alexander-Arnold‘s excellent cross.

Liverpool had 69.5 percent of possession in the opening 45 minutes, but unlike in the derby on Sunday, couldn’t find the moment of quality required to break through West Brom‘s low block. The weather at Anfield intensified as the game wore on, and it nearly worked to the away side’s advantage early on in the second half.

With Grzegorz Krychowiak standing over a set-piece from deep, his wind-assisted free-kick needed to be tipped over by Karius, before the German made a smart save to deny Claudio Yacob from the corner.

As West Brom began to grow in confidence, they allowed more space to open up at the back, and a cutback from Firmino saw Sadio Mane fade an effort wide.

Mane and Salah were queuing up at the back post as Alexander-Arnold chipped a ball in minutes later, but the latter took the ball away from his fellow winger, weakly shouldering it out.

With 15 minutes remaining, Klopp made two changes, with Alex Oxlade-Chamberlain and Dominic Solanke coming on to replace Mane and Georginio Wijnaldum.

Solanke had the ball in the back of the net after a teasing cross from another substitute, Joe Gomez, but referee Paul Tierney wrongly deemed the striker to had intentionally handballed it in, ushering the game to a disappointing close.