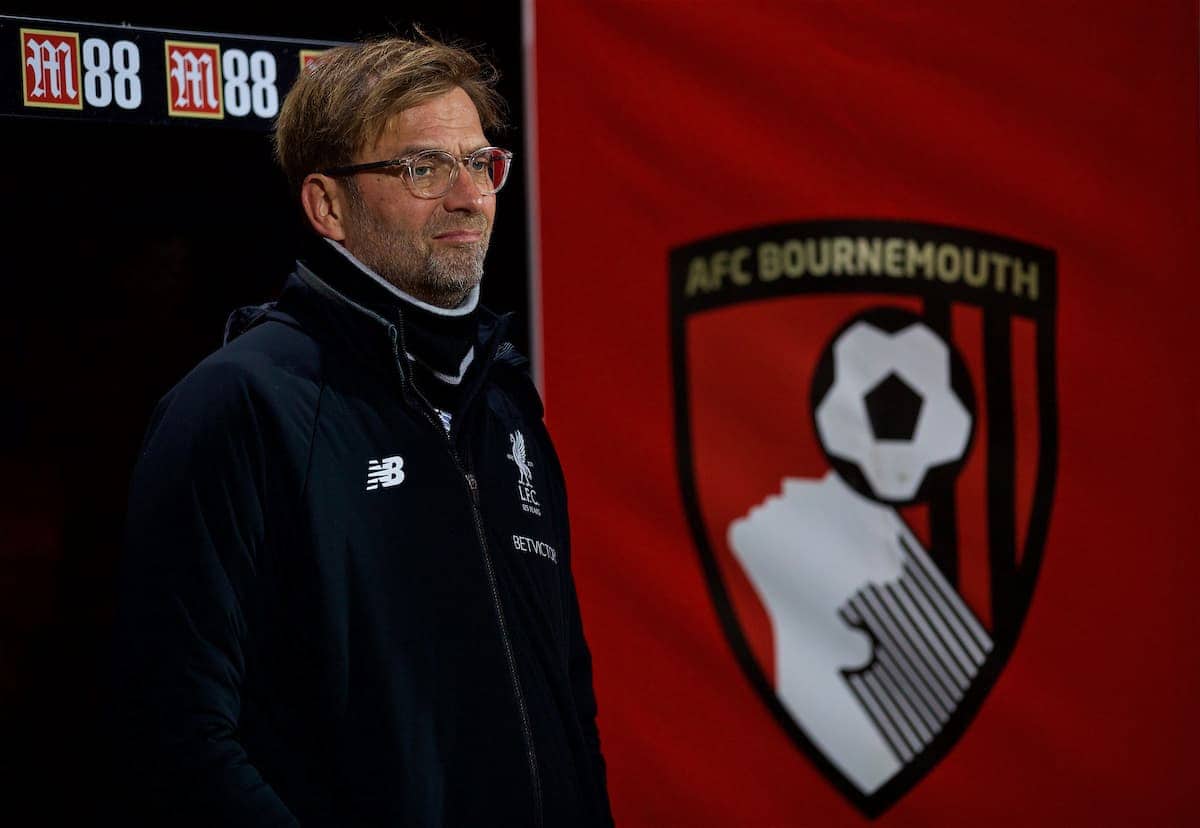 The media were impressed with the completeness of Liverpool’s performance and Mohamed Salah in the 4-0 thrashing of Bournemouth.

Recent frustrations and memories of last season’s south coast collapse were banished with an emphatic victory to get the top-four challenge back on track.

A stunning first-half with goals from Philippe Coutinho, Dejan Lovren and Mohamed Salah gave the Reds a commanding half-time lead, before Roberto Firmino completed the scoring after the break.

It was the perfect way to move on from recent disappointing results, and Klopp’s men deserve credit for delivering such a convincing win under pressure to move back into the top four.

Here’s how the media assessed a fantastic afternoon at Dean Court. A thumping victory not only lifted the Reds back into the top four but it also provided a welcome injection of belief at a crucial stage of the campaign. Momentum has been regained.

Echo colleague Neil Jones focused on the Reds’ impressive form away form, and feels it will help Klopp’s side move into a strong place in the top four race:

In Liverpool’s last seven away games, they have scored 27 goals. They have scored three or more in five consecutive matches on their travels, the first time that’s happened in 35 years.

With back-to-back home games over the festive period, Swansea and then Leicester, a result in North London would set things up nicely. The race for the top four is fierce, and the chance is there for Liverpool to make serious ground up in the coming weeks.

These are the kind of fixtures that undid Liverpool in the previous campaign — the 4-3 defeat away to Bournemouth most haunting — but the Merseysiders have now lost only one of their last 23 league matches against teams outside the ‘big six’.

The Guardian’s Dominic Fifield assessed the display showed “all that is thrilling about Jurgen Klopp’s side”:

This was a performance to showcase all that is thrilling about Jürgen Klopp’s side, from Philippe Coutinho’s invention to Mohamed Salah’s bite, from rare poise at pace in midfield to the relentless press which left Bournemouth gasping for breath.

This Is Anfield’s James Nalton was impressed by the way Liverpool saw the game out:

But Liverpool limited their opponents to just one shot on target in the second half, and thanks to solid defensive play throughout the team they were able to keep a clean sheet. Writing for ESPN, Nick Ames noted Liverpool’s improved structure, assessing the Reds had a much better balance in midfield:

Encouragingly there was more structure behind their front men, too. Liverpool have struggled for balance in recent months, but Jordan Henderson, Georginio Wijnaldum and Oxlade-Chamberlain looked a balanced blend in midfield, the latter producing one of his best performances since joining the club.

Pearce assessed an improvement in the Reds’ fluency and speed of passing as crucial:

Bournemouth simply couldn’t handle the pace and the precision of the Reds’ attacking play as they were repeatedly torn apart.

There was a fluency and an urgency which was sadly lacking against the Baggies as Liverpool moved the ball so much quicker.

Fifield believes Klopp’s side must now hit this level of performance more consistently:

It was the kind of display to which Klopp will cling in charting a route forward, a standard his team must aspire to reach consistently even if the Premier League title is as good as Manchester City’s already.

Meanwhile, the Independent’s Jack Austin believes Liverpool can be Man City’s biggest challengers in the future if they can improve defensively:

While neither of the above-mentioned players were at all poor, there was always a feeling the Bournemouth could score.

Once that threat is eliminated the Reds could turn out to be the greatest threat to Manchester City domination.

There was plenty of praise for the attacking trio, and in particular Mo Salah

Richard Jolly, writing for Yahoo.com, compared the Reds’ attack to this fixture last season, noting how Klopp’s side are no longer reliant on individuals:

That the win came with Sadio Mane an unused substitute was also significant. The Senegalese has been out of form, but Liverpool are far less reliant upon him.

Philippe Coutinho and Roberto Firmino also scored and starred as it demonstrated that, for all the talk of Liverpool’s ‘Fab Four,’ they often only really need three of them on the pitch. Last season, they could not afford to lose one. This season, they can.

Austin commented on Klopp’s rotation of the captaincy, and believes it has inspired another level from Coutinho:

However, the largest effect it seems to have had has been on Coutinho, who once again put in a commanding performance, capped with a marvellous individual goal to open the scoring.

Coutinho has become the leader of Liverpool’s attacking, not only as the creator and chief orchestrator, but also in his encouragement of the players around him. Klopp wanted more leaders in his team and he looks as though he is getting it.

He is the outright star of this Liverpool team now. It is a role he embraces as a leader by example, completely different to the shrinking violet winger from his days at Stamford Bridge.

Now, he fronts up, takes responsibility and leads Liverpool’s attacks whether as part of a front two or a front three, as seen here.

Ames drew comparisons between the Egyptian and Cristiano Ronaldo of bygone years:

His movement is so sharp and his power almost unstoppable in full flight that there are times when his impact from a wide attacking position invite comparisons with the Cristiano Ronaldo of a few years back.

When he was not terrifying defenders himself, he was teeing up his team mates to do just that, with a lovely second-half flick laying the ball on a plate for Coutinho.

For a player riding the crest of a wave Salah is happy to do the dirty work too, tracking back at his man or choosing the unselfish option.

Meanwhile, Pearce believes Salah could be a Ballon d’Or contender if he maintains this form:

Forget African Footballer of the Year, if he maintains these sky-high standards then he will be a serious contender for the Ballon d’Or.

In contrast to recent games, the watching journalists were full of praise for numerous Reds

Nalton saw improvement in Jordan Henderson, and felt the captain looked more at home in a two-man midfield:

Today he operated alongside Georginio Wijnaldum in a midfield pair with Oxlade-Chamberlain ahead of him, and it seemed to bring out moments of the box-to-box midfielder of old.

There were encouraging signs: the odd interception, tackle, and pass, and though the ball-watching was still evident, it didn’t seem to matter as much.

This Is Anfield’s Karl Matchett was impressed with Alex Oxlade-Chamberlain, and explained how he is now becoming an important player tactically for Klopp’s side:

Oxlade-Chamberlain helped win the ball back quickly in midfield, showed great awareness to play into the final third and wasn’t shy about breaking forward from deep.

Jones was impressed with the ‘new boys’, assessing they have started to repay Klopp’s faith:

Klopp has spoken publicly of the need for patience, and the signs here are that it will be rewarded. Oxlade-Chamberlain, from midfield, was Sky’s man of the match, a whir of energy, speed and ever-improving quality.

At left back Robertson played with composure and belief, emboldened by Philippe Coutinho‘s excellence in front of him.

Led the line brilliantly once again and his work rate and constant movement was just too much for Bournemouth to handle.

Got the goal his efforts deserved in the second half when he headed in his 13th of the season.