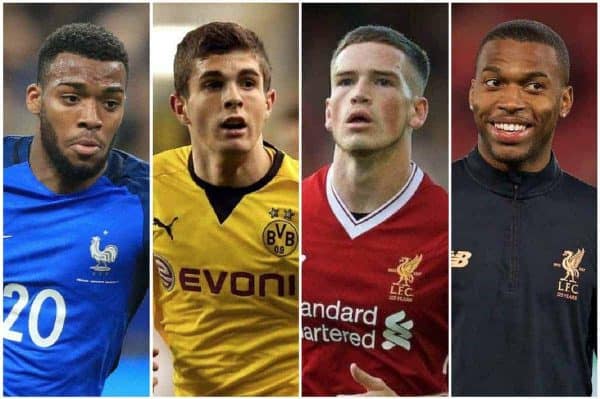 We round up the latest transfer news and rumours from Anfield, as Jurgen Klopp prepares Liverpool for their return to action against Man City.

The Reds were given a long weekend off after Friday night’s 2-1 win at home to Everton the FA Cup, with the majority of Klopp’s squad heading to Dubai for a short break.

Reporting back to Melwood on Tuesday afternoon, Liverpool have now set their sights on the league leaders, with City set to travel to Merseyside for a Sunday blockbuster.

Still reeling from Philippe Coutinho‘s £142 million move to Barcelona, however, a heavy focus remains on the transfer market.

Here’s the latest from the rumour mill as the January window rolls on.

Monaco Would Demand £90m For Lemar

A potential move to replace Coutinho with AS Monaco midfielder Thomas Lemar remains up in the air, with sources conflicting over Liverpool’s interest.

The latest, however, suggests the Reds will vie with Arsenal for the 22-year-old’s signature.

According to the Mirror, this would see Lemar leave the principality in a deal worth “at least £90 million,” which would shatter both clubs’ transfer record.

Liverpool’s current record signing is Virgil van Dijk, but the inflated market, and an influx of funds from Coutinho’s departure, would dictate an increased fee for Lemar.

The Reds could still opt to wait until next summer, however, but encouragingly Monaco are said to be “open to cashing in” after previous claims they would not sell this month.

If Liverpool do wait until the end of the season to find an alternative to their former No. 10, their options could increase.

It has been speculated that Klopp has set his sights on a highly ambitious, as-yet-unnamed target, heightening anticipation of a top-level replacement.

According to German football expert Rafa Honigstein, the Reds may revive their interest in Borussia Dortmund’s teenage winger Christian Pulisic.

“Pulisic is a player Liverpool have tried to buy before [and] I’d be very surprised if they don’t come in heavily for him next summer,” he told The Totally Football Show.

The Reds saw an £11 million bid for Pulisic turned down in 2016, and while he would now cost considerably more, Honigstein stresses that Dortmund aren’t prepared to sell at this stage.

An in-house solution to Klopp losing one of his attacking options could come in the form of Ryan Kent, who returned from an unsuccessful loan spell with SC Freiburg on Monday.

Having made just six appearances for the Bundesliga side, the 21-year-old’s spell in Germany ended early.

And while his versatility could provide Klopp with a useful option on either flank, Kent is expected to leave the club in another temporary deal this month.

According to the Mail, both Bristol City and Sheffield United have made offers for the winger.

Joining an ambitious Championship side could be the right move for Kent as he bids for a long-term future under Klopp at Anfield.

Reports on Monday claimed that Klopp is now looking to keep out-of-favour striker Danny Ings on Merseyside this month, with Daniel Sturridge instead allowed to leave.

The England international has been used sparingly so far this season, and is currently sidelined through injury as his struggle to carve out a role continues.

Both Southampton and West Ham have been touted with moves for Sturridge, and now the Northern Echo claim Newcastle United have entered the frame.

Rafa Benitez is seeking reinforcement in the final third this month due to a lack of goals from Joselu, Dwight Gayle, Ayoze Perez and Aleksandar Mitrovic.

If Sturridge stays fit, he would certainly fill the void in the Magpies’ attack, and either a loan or a permanent move would likely suit Liverpool.

Strootman Claimed As Can Replacement

As the days pass the likelihood of Emre Can agreeing an extension to his Liverpool contract grows slimmer, with a move to Juventus likely.

With this in mind, Klopp could be scoping out potential replacements for the 23-year-old, who has started in 23 of the Reds’ 32 games so far this season (71.8 percent).

According Italian outlet Premium Sport, AS Roma midfielder Kevin Strootman is already the subject of interest.

And “if Liverpool formulated a concrete offer” a deal could move swiftly, with Roma now more open to parting ways with the Dutch international.

However, Il Messaggero claim that Man United could also make a move for the 27-year-old, who has a £39.7 million release clause in his contract.

Quite why Liverpool would be pursuing another left-back at this stage, given the form of Alberto Moreno and Andrew Robertson this season, is a mystery.

But according to Portuguese publication O Jogo they are among a host of clubs interested in FC Porto’s Brazilian defender Alex Telles.

They suggest that both Chelsea and Wolves, currently managed by Nuno Espirito Santo and boasting seven Portuguese players in their ranks including ex-Porto midfielder Ruben Neves, are also in the race.

Those claiming Liverpool would be eager to sign another left-back, regardless of Telles’ quality, clearly haven’t seen either Moreno or Robertson in action this season…

Finally, Coutinho’s switch to Barcelona has prompted speculation over the futures of a host of Ernesto Valverde’s players.

While the Brazilian is expected to serve as a long-term replacement for Andres Iniesta, one of the midfielders whose future is under more immediate threat is Ivan Rakitic.

According to the highly dubious Diario Gol, this could see Rakitic leave the Nou Camp, with Liverpool among his suitors.

However, it is claimed that the Croatia international is set to wait until after the summer’s World Cup, at which point he would be 30.