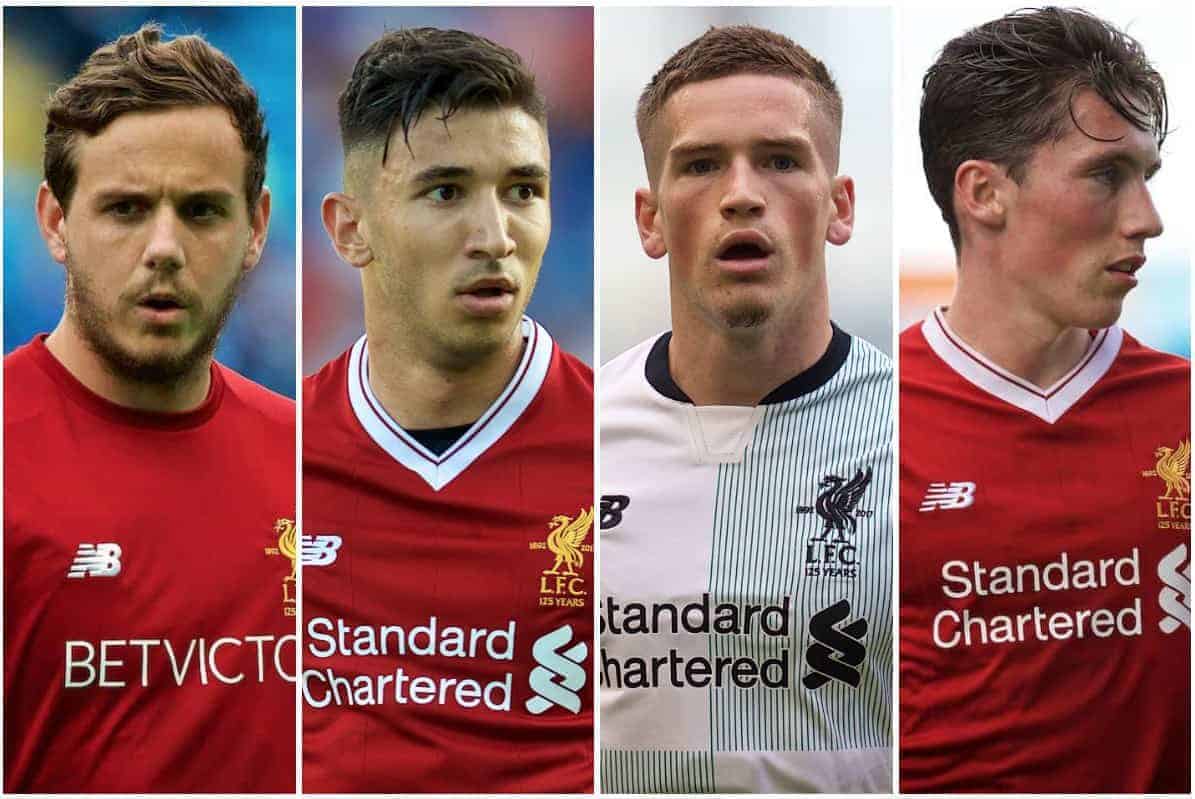 Liverpool could be busy in the loan market this January, with a host of young stars and fringe players in need of a temporary move elsewhere.

But the likes of Ryan Kent and Toni Gomes enduring tough spells away from Merseyside in the first half of the season underlines how crucial it is to find the right club.

Jurgen Klopp and Liverpool’s academy staff will be aware of this as they consider departures for those in need of competitive action in 2018.

With this in mind, here are the ideal loan destinations for seven peripheral figures this month.

Ward was the subject of interest from Huddersfield Town last summer, following his productive campaign between the sticks for David Wagner’s side as they sealed promotion to the Premier League.

Klopp opted to keep the Wales international at Anfield, however, with plans to rotate him along with Simon Mignolet and Loris Karius as the Reds challenged on four fronts.

But halfway through the season Ward has made just one appearance in the 2-0 League Cup defeat away to Leicester City in September, and has only been on the substitutes’ bench on two occasions.

Having already proved himself in the Championship and the Scottish Premiership with Aberdeen, Ward is now ready for the English top flight.

With Palace in search of a new stopper this month, a switch to Selhurst Park could provide him the opportunity he requires. Unlike his fellow midfielder Cameron Brannagan, Ejaria could still have a future under Klopp at Liverpool, but it is clear he must make significant development in order to claim a long-term role.

U23s manager Neil Critchley has already revealed the plan is to allow the England U20 international to leave on loan in January in order to return “a bit tougher” and “a bit more streetwise.”

Joining Leeds, who are battling for promotion from the Championship this season, could provide Ejaria with the ideal challenge, also allowing him to hone his game as a creator.

He would certainly provide the second-tier hopefuls with a more progressive option.

Though he is courting interest from Turkish Super Lig side Fenerbahce, Grujic’s agent has already stressed that he would be seeking a loan to another English club this January.

Both Brighton and Aston Villa are reported to be among the Serbian’s suitors, and joining the Seagulls’ bid for Premier League survival could be the test he requires.

Chris Hughton is already able to call upon a strong bank of midfielders, but the need for an alternative to Pascal Gross as his main outlet in the No. 10 role is clear.

Grujic has the potential to shine at the top level, but operating in a diligent system such as Brighton‘s could see him make crucial improvements in his off-ball game.

Woodburn is believed to be on the verge of a loan move to join Sunderland, but Philippe Coutinho‘s £142 million move to Barcelona and Mohamed Salah‘s groin injury have delayed progress.

The 18-year-old should play a key role in Liverpool’s future under Klopp, and having signed a new five-year contract with the club in October this is near guaranteed.

But he cannot be the solution as Klopp seeks a replacement for Coutinho for the second half of 2017/18.

Joining the Black Cats, who are embroiled in a relegation dogfight, would give Woodburn the opportunity to cut his teeth at senior level week in, week out.

With his former Wales manager Chris Coleman taking over at the Stadium of Light in November, the Reds can rely on Woodburn to be given the game time he needs to fulfil his vast potential.

Kent’s step into the unknown with SC Freiburg in August was an admirable one, but the 21-year-old’s time in the Bundesliga proved wholly frustrating.

After making just six appearances for Christian Streich’s side before the winter break, Kent has returned to Liverpool and has been registered as part of Klopp’s first-team squad.

It is likely he will leave on loan again later this month, however, and a step down into the Championship could be a worthwhile move.

Promotion chasers Bristol City could give Kent the perfect launchpad for his fledgling career, with Lee Johnson’s young side playing an attractive brand of football.

If he produces an impressive run of form in the second half of the season Kent could hope for a bigger role under Klopp in 2018/19. Wilson finds himself in a difficult position at Liverpool: too good to be mired at U23 level, but seemingly not in consideration for Klopp’s senior squad.

The young Welshman scored 12 goals and laid on 10 assists in just 16 games in the first half of the season, and his end product could be invaluable for an ambitious Championship side.

Making the trip up the M6 to Preston, who will be targeting a playoff place come May, could be the ideal situation for Wilson.

Alex Neil doesn’t have a wealth of options out wide at present, and Wilson’s versatility and cutting edge could provide him with a wild card in a late surge in 2018.

There is no shortage of interest in Ings this month, and behind Roberto Firmino, Daniel Sturridge and Dominic Solanke in Klopp’s pecking order up front, he desperately needs a move.

Given his long-term injury problems, it is unlikely Ings would be able to secure a permanent switch mid-season, but there are a host of clubs who would benefit from his attacking talents.

Most notably, Newcastle‘s struggles in the final third need to be addressed, and Rafa Benitez is reportedly an admirer of Ings.

Between them, Joselu, Ayoze Perez, Dwight Gayle and Aleksandar Mitrovic have scored 10 goals so far this season, and Ings could easily overtake the misfiring quartet as Benitez’s first choice.