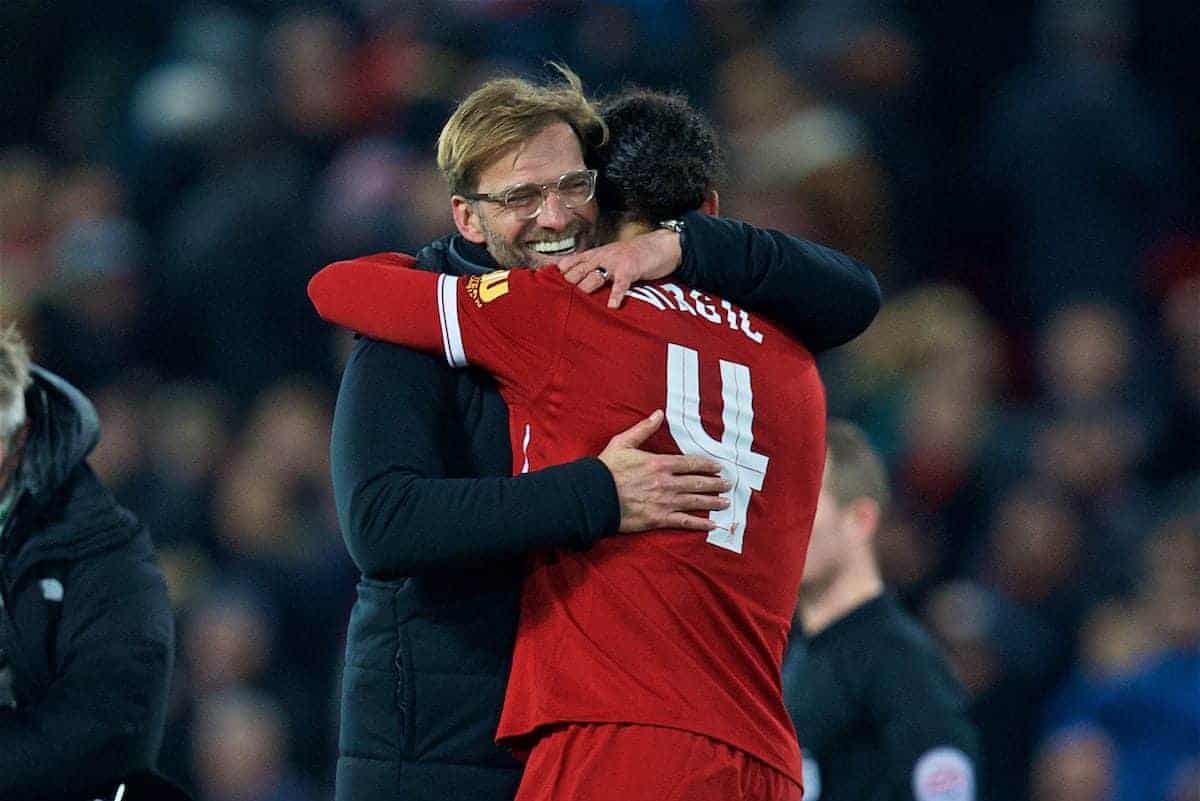 Liverpool manager Jurgen Klopp may have spent £75million on Virgil van Dijk but he was still impressed by the Dutchman’s debut.

The Netherlands international, who arrived from Southampton for a world-record fee for a defender, scored in front of the Kop in the 84th minute to get his Reds career off to a dream start with a 2-1 win over Everton in the FA Cup third round at Anfield.

Klopp’s late decision to start the centre-back, having put Van Dijk in his team on the morning of the match, paid off handsomely and despite the defender being viewed as the missing piece in the jigsaw the Reds boss believes the defender still has progress to make.

“He was much better than I thought, to be honest, because it’s difficult, it’s always difficult,” said Klopp.

“I said before the game that my expectations are easy to reach because I know how good he is and so I only want him to show that.

“I still know that he’s a human being and we all know that expectation can lead to pressure.

“He was for sure nervous but you could not see it and that’s the most important thing probably, he obviously could stand the pressure.

“He showed a lot of things we want him to show in the future very often: heading of course, football-wise his first touch was good, good under pressure and then around set-pieces a proper threat.

“I think first of all we should help him just to be as good as he is already because that’s why we took him.

“You don’t pay that amount of money for a player and think ‘OK, we can get another 80 per cent’, but of course there is (room for) improvement.”

Van Dijk hopes to see improvement for him and the team after kicking off his Anfield career with a win.

“From what I’ve seen over the last couple of days – I’ve only been with the group for four or five days – it’s a special group with a lot of quality, a lot of presence and a lot of personality,” the 26-year-old told liverpoolfc.com.

“Everyone has welcomed me very well. I just want to improve and work hard for the team, the club and the fans every day.

“There is still plenty of room for improvement. It’s just the start.

“I haven’t played a game for the last three weeks; I was very happy that I got the chance and I’m very happy that we went through to the next round. It was a tough game but we’re through.”

Van Dijk’s debut was overshadowed somewhat by a flashpoint between Roberto Firmino and Everton‘s Mason Holgate and the Football Association are awaiting referee Bobby Madley’s report after the Toffees raised the incident with match officials.

Liverpool have pledged to co-operate should the governing body deem it necessary to launch an investigation, which seems almost certain considering the seriousness of the allegations, which Press Association Sport understands were made by Everton to the referee after the final whistle.

The incident arose after Holgate pushed the Reds forward into the crowd before the pair exchanged insults within earshot of Madley.